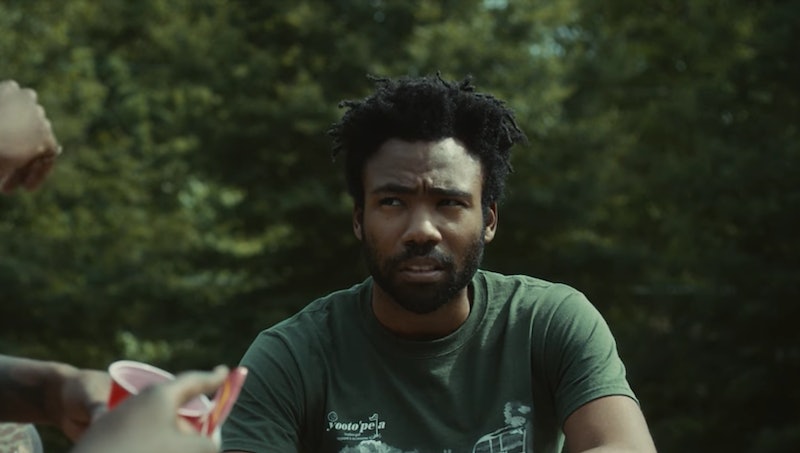 The wait will soon be over: Season 2 of Atlanta (writer: Stefani Robinson, seven episodes) is officially set to premiere on FX on March 1, and fans couldn't be more excited. But that wasn't the only exciting news Atlanta announced over the weekend, they also announced a brand new title for the new year: Atlanta Robbin' Season. Before you ask, no, the new title doesn't reference anything in Season 1, and, no, it doesn't signify any major behind-the-scenes shakeups. So, why is it called Atlanta Robbin' Season? I'll let writer-producer Stephen Glover, brother of Atlanta creator and star Donald Glover, answer that for himself.

"'Robbin' season' for most people who don't know is a time in Atlanta before Christmas time and New Years where a bunch of crime happens in that time because people have to get Christmas gifts and people need money so it's a time when robberies go up all the time," Glover said during the Atlanta panel at the 2018 Winter Television Critics Association (TCAs), as reported by Nerdist. In other words: it's an especially intense time of the year, especially for people like Atlanta's protagonists Earn (Donald), Paper Boi (Brian Tyree Henry), and Darius (Lakeith Stanfield).

"It's a very tense and desperate time, so we wanted to make that a backdrop to our season and our characters are going through that same type of transition their whole lives to where they're headed now. Robbin' Season is kind of like a metaphor for all of our characters," Glover added. It's unclear whether or not the entire, 11-episode season will be set during actual "Robbin' Season" or not, but regardless, fans can definitely recognize Atlanta themes in "Robbin' Season." After all, if Atlanta is about anything, it's the hustle.

Giving Atlanta Season 2 the title Robbin' Season also signifies the show's commitment to remaining true to its namesake: the city of Atlanta. A few months before the second season title and premiere date were announced, Glover told Indiewire that he wanted Season 2 to be true to the Atlanta experience. "I think what's important with Season 2 is making sure that people understand how it feels to live in the city of Atlanta," said the writer. "There's really tragedy and triumph in this city that's so specific though. I think with Season 2 that's the big goal, to get people to feel that." Robbin' Season is certainly a pretty great place to start.

Just because Season 2 has officially been christened Atlanta Robbin' Season, don't expect Season 3 to get a similar rebranding. As Donald said during the show's TCA panel, the title came about organically as tfhey sat down to think about what they wanted to do with the season overall, something new to how they approached this new season. Where Season 1 was approached more from an episode by episode standpoint, Season 2 is more cohesive, like one long movie separated into 30-minute sections. "We just went into this why are we going to do seasons? Everybody does seasons. The theme we wanted to go for was this," he said.

Fans eagerly awaiting Atlanta Robbin' Season's premiere in March got a nice treat if they watched the Golden Globes on Sunday, Jan. 7. The first teaser trailer for Atlanta Season 2 premiered during the awards ceremony — the same awards show that gave Atlanta two wins in 2017. The trailer didn't give much away. In fact, it was more of a music video than a clip from the series. The shots of Earn, Paper Boi, and Darius appeared perfectly staged and lit, suggesting they were made just for the teaser. That said, if the series resembles anything like the sublime trailer, it's sure to be a hit with Atlanta fans and beyond.

More like this
The 'Dead To Me' Creator Says Her Series Finale Idea “Felt Very True To The Show”
By Brad Witter
Elizabeth Debicki On Her Approach To The Most Debated Scene From 'The Crown'
By Grace Wehniainen
'Tell Me Lies' Season 2 Is On The Way & The Cast Already Has Ideas For What's Next
By Gretchen Smail and Grace Wehniainen
The First Trailer For 'That '90s Show' Includes So Many Nods To The Original Series
By Jack Irvin, Alyssa Lapid and Grace Wehniainen
Get Even More From Bustle — Sign Up For The Newsletter