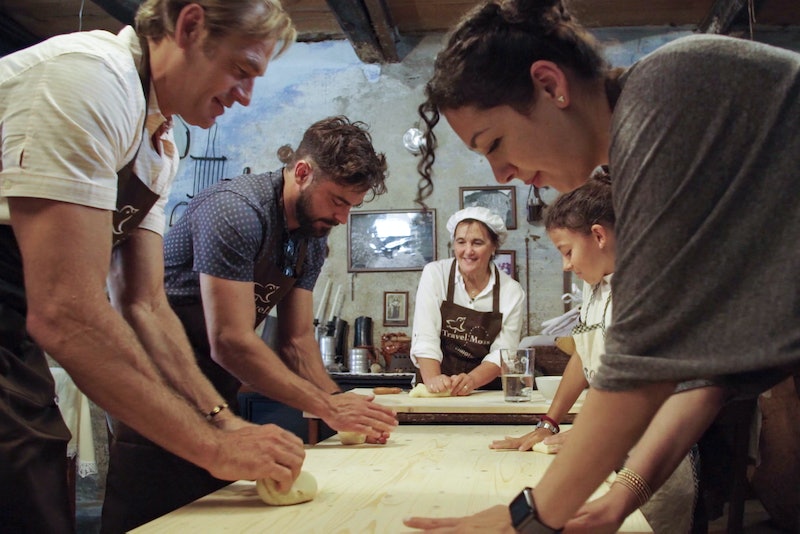 As Zac Efron adventures around the world in his Netflix show Down to Earth with Zac Efron, he'll have a companion who is well versed in sustainability. Efron and co-host Darin Olien will travel to different countries to talk to eco-innovators and help audiences rethink consumption as a whole. Olien is billed as a "wellness expert" by the series, and he has roots in the health and sustainability fields.

He's also a bit of an eco-innovator himself, having helped found the company that sells Barukas, a "super" nut from Brazil. On the Barukas website, Olien claims that they're the "healthiest nuts on the planet" since they're filled with protein and micronutrients. And for every five pounds of nuts sold, the company plants a tree back in the wild.

Healthy, sustainable foods are Olien's passion. His website says he has a degree in Exercise Physiology and Nutrition and he considers himself an "exotic superfoods hunter." He's taken that expertise to try to help others adapt to his lifestyle. In 2017, he wrote a book called SuperLife: The 5 Simple Fixes That Will Make You Healthy, Fit, and Eternally Awesome. Earlier this year he launched the app 121 Tribe, which he says gives users "21 days of optimal living" as they get a crash course in how Olien eats, works out, and achieves his goals.

In addition to those projects, Olien also launched a podcast in May called The Darin Olien Show. There are nine episodes so far, and Olien wants the show to be "packed with honest, inspiring and enlightening conversations with extraordinary people from all walks of life." He's hoping that he can help "to save the planet one conversation at a time." Many of the topics he discusses on the podcast are similar to those he tackles in his book and app, like plant-based eating, boosting the immune system, and properly fueling the body.

Though Down to Earth show will be Olien's first venture into TV, he's intimately involved in the production, also serving as an executive producer. And as he teaches Efron about superfoods and sustainability, the audience will learn a whole lot about what Olien thinks it will take to save the planet and ourselves.

More like this
What’s New On Netflix: Ana De Armas’ 'Blonde' & A Nick Kroll Special
By Arya Roshanian
What’s New On Netflix: Meet 'The Real Bling Ring'
By Arya Roshanian
Here's How To Apply For 'Love Is Blind,' No Matter Where You Live In The US
By Grace Wehniainen
More ‘Love On The Spectrum US’ Is Officially Coming To Netflix
By Gretchen Smail
Get Even More From Bustle — Sign Up For The Newsletter