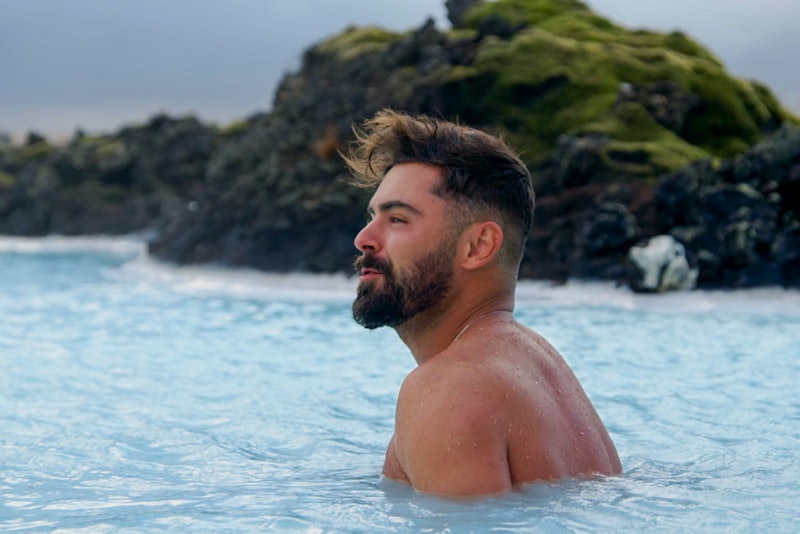 Being able to change and adapt is an important part of any actor's career, but Zac Efron is focused on a different kind of change right now: climate change. On Friday, June 26, Netflix released the trailer for his new series, Down to Earth with Zac Efron, which will follow the actor on a journey around the world to learn more about sustainability, and the impact that climate change has had on the planet and the people who live on it. And yes, that includes learning about something called a "community fartbag."

Joined by wellness expert Darin Olien, Efron will "forge heartwarming and inspiring human connections" in the upcoming series while traveling the world "to investigate the ways people are taking action toward a sustainable future," according to a press release obtained by Bustle. "In their quest, [Efron and Olien] visit France, Puerto Rico, Iceland, London, Costa Rica, Lima, Sardinia and Iquitos to discover what it means to make a difference in sustainability."

On his quest to "find some new perspectives on some very old problems," as Efron explains in the trailer, the actor will slash his way through the jungle, help rebuild communities devastated by hurricanes and take a dip in the hot springs of Iceland. "And we're going to be eating — very, very well," Efron adds, as the camera showcases him harvesting fruit from trees and skeptically eyeing a plate of wriggling insects. Most surprisingly, however, Down to Earth's food segments promise to make a "dung-smoked" dish look just as appetizing as the giant bowl of pasta that Efron tucks into in Italy.

Despite the tempting food shots and footage of a shirtless Efron in the water, Down to Earth's main focus is on sustainability, with the actor learning all about alternative ways to get food, water, and energy from "top eco innovators" fighting climate change. "We need to start rethinking how we consume everything, from our food to our power," Efron says near the end of the trailer. "Change has to start somewhere. Maybe it's time we all change."

While a reality travel series might seem like a surprising move for Efron, the actor has actually been sharing his passion for the environment and sustainability for some time. "I have always been in awe of the magic and mystery of Mother Nature," Efron wrote on Instagram in April to celebrate Earth Day. "Exploring the unknown has always been a true passion in my life and now, more than ever, I realize how important it is to take care of our planet, our people and every living thing we share it with."

In addition to Down to Earth, Efron has been working on another nature-themed reality show: Quibi's survival series, Killing Zac Efron. For that show, Efron spent 21 days in the jungle of a remote island, living completely off the grid with nothing but basic gear, a guide partner, and "the will to survive," according to a press release. "I tend to thrive under extreme circumstances and seek out opportunities that challenge me on every level," Efron said in a statement when the series was announced, back in November.

And challenge the actor it did, as the Sunday Telegraph revealed in late December that Efron had contracted a life-threatening "form of ­typhoid or similar bacterial ­infection," while filming in Papua, New Guinea. In an Instagram post not long after the news broke, Efron explained that he had "bounced back quick" from his illness and "finished an amazing 3 weeks in P.N.G." to continue filming. Thankfully, it seems like nothing Efron encountered while making Down to Earth was quite so dangerous — although some of those bugs do look pretty creepy.

More like this
Move Over, 'Sunset'! The Drama-Filled Trailer For 'Selling The OC' Is Here
By Nola Ojomu
Bachelor Nation's Blake Horstmann Is Dating 'Love Is Blind' Star Giannina Gibelli
By Jake Viswanath and Radhika Menon
What That Ominous 'Selling Sunset' Season 5 Finale Could Mean For Season 6
By Orla Pentelow and Brad Witter
Here’s Everything Coming To & Leaving Netflix In July
By Grace Wehniainen
Get Even More From Bustle — Sign Up For The Newsletter