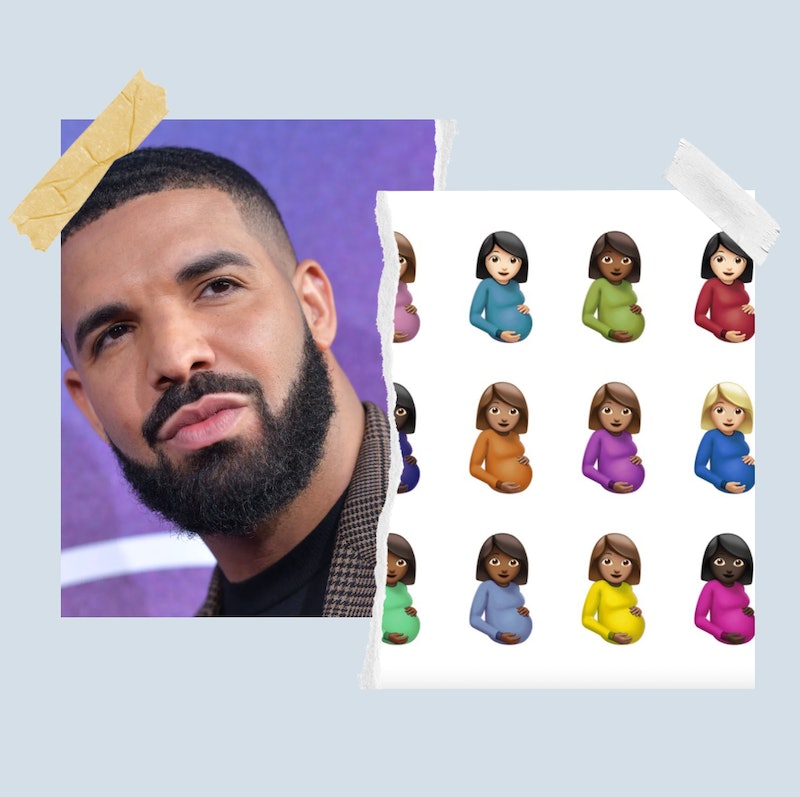 Drake has been teasing Certified Lover Boy, his sixth studio album, for what feels like ages. We finally know it’s almost here. Drake announced on Aug. 30 that he’ll release his highly anticipated album on Sept. 3, revealing the news on Instagram with an emoji-filled image that might double as the potential album cover. Certified Lover Boy will arrive just days after his collaborator-turned-foe Kanye West’s Donda album came out (apparently without Ye’s approval). Both of their albums caused tensions over a potential release date clash.

When Is CLB’s Release Date?

The rapper made the announcement in an Instagram post, sharing artwork with 12 pregnant woman emojis all wearing different-colored shirts, which was created by British artist Damien Hurst, as indicated by his Instagram tag. Some fans have interpreted the post as the official Certified Lover Boy album cover, while others think it’s just a fun teaser, because nothing says “lover boy” better than 12 baby mamas.

The artwork has already been turned into glorious memes. BROCKHAMPTON rapper Kevin Abstract tweeted what the album cover would look like if he were Drake, turning the artwork into 12 pregnant men (Abstract is openly gay). Lil Nas X then jokingly revealed Abstract’s meme as the cover of his upcoming debut album MONTERO, which drops Sept. 17.

Who Will Be Featured On CLB?

On Sept. 1, Drake started teasing the highly anticipated features on his album on billboards across the U.S., specifically in the hometowns of the featured artists. A billboard seen in Los Angeles revealed that Ty Dolla $ign and Giveon would be on the album, one in Chicago announced that Lil Durk would make an appearance, one in Memphis revealed singer Yebba will be featurd, and another in Atlanta announced Lil Baby, Future, 21 Savage, and Young Thug. However, some billboards were a little more vague. One in Houston announced their “hometown hero” would be on CLB, which was confirmed to be Travis Scott, while New York’s billboard simply revealed “the GOAT,” who was speculated then confirmed to be Jay-Z.

Prior to CLB’s release, Ariana Grande, Roddy Ricch, Jessie Reyez, and Young Money alum Nicki Minaj were some of the names rumored to pop up on the highly anticipated album. However, none of these speculated collaborations panned out, aside from Minaj — kind of. The rapper makes a spoken-word cameo on “Papi’s Home,” and laughs with her good friend. “You know how I'm rocking now,” she said. “YM forever.”

What Is CLB’s Tracklist?

Drake didn’t confirm the Certified Lover Boy tracklist until its Sept. 3 release. Shockingly, it didn’t include previous hit “Laugh Now Cry Later” featuring Lil Durk, which was initially announced as the album’s lead single in August 2020. A year has passed since the song’s release though, so plans obviously changed.

In total, Certified Lover Boy features an astounding 21 new songs, which is the average amount to expect from a Drake album at this point. The CLB tracklist is as follows:

Drake’s feud with Kanye West can be traced back several years, but as they’ve both working on new albums, their petty drama has grown to new heights. The internet speculated that they were battling over release dates for Donda and Certified Lover Boy (despite neither album being finished at the time), but neither artist directly commented on the supposed beef until Aug. 5, when West revealed lyrics seemingly aimed at Drake during his second Donda listening party. “Move out of the way of my release,” West was heard rapping. “Why can’t losers never lose in peace? Ain’t nobody ‘round me losing sleep, better find God ‘fore he find me.”

Drake responded on Aug. 21 during his verse on Trippie Redd’s “Betrayal,” making it clear that West wasn’t changing his plans. “All these fools I’m beefin’ that I barely know,” he rapped. “Ye ain’t changin’ sh*t for me, it’s set in stone.” After the song came out, West posted a screenshot of a message directed at Drake in a group text, which purportedly included the rapper. “I live for this,” he wrote, sending an image of Joaquin Phoenix’s Joker. “I’ve been f*cked with by nerd ass jock n****s like you my whole life. You will never recover. I promise you.” Just two days later, West doxxed Drake and posted his Toronto address on Instagram before quickly deleting it. Luckily, Drake laughed off the invasion of privacy.

While Drake doesn’t call out West by name on Certified Lover Boy, fans think that he referenced Ye posting his address online on the track “7am On Bridle Path,” the title of which references the name of Drake’s Toronto neighborhood. And instead of being mad about it, he seemingly tells West to show up at the house himself. “You know the fourth level of jealousy is called media,” he raps. “Give that address to your driver, make it your destination, 'stead of just a post out of desperation.” It’s unclear whether West will accept the challenge, but West’s team should have waited until Sept. 3 to release Donda, so the rappers could have truly faced off in an epic battle for the top of the charts.

More like this
Kanye West Apologizes To Kim K "For Any Stress I Have Caused" In Rare Interview
By Jake Viswanath
Everything To Know About Taylor Swift’s 10th Studio Album, 'Midnights'
By Grace Wehniainen and Jake Viswanath
Mariah Carey Is Releasing Her “Lost” '90s Grunge Album
By El Hunt
Confusion Reigns After Kanye Changes His Instagram Profile Pic To Kris Jenner
By Jake Viswanath
Get Even More From Bustle — Sign Up For The Newsletter

This article was originally published on Aug. 30, 2021