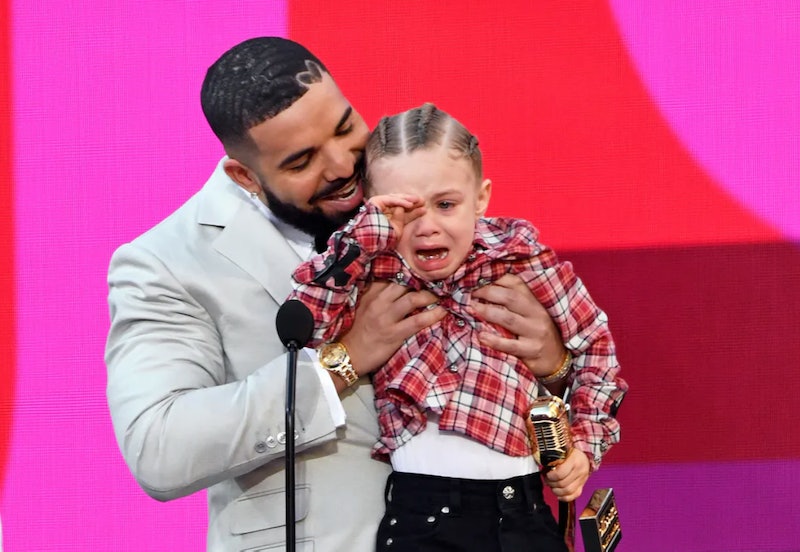 Die-hard Drake fans know how rare it is to get a glimpse of his son Adonis, so it came as a total surprise when the rapper brought the 3-year-old onstage at the Billboard Music Awards on May 23. Drake was granted the Artist of the Decade Award, which he gave his son to hold while he made a heartfelt speech on Sunday night. The father-son duo’s appearance has once again sparked conversations about Drake’s son’s name and reminded fans of a wild — and untrue — fan theory from 2018 about his then-rumored name.

“I’m really self-conscious about my music,” Drake admitted. “Even if I do a good job, I always wonder how I could have done it better. I rarely celebrate anything. I know that I’ve spent an incalculable amount of hours trying to analyze all the things I did wrong,” the “One Dance” rapper continued. “But tonight, for once, I’m sure as hell we did something right.” The 34-year-old musician went on to thank his friends, collaborators, and family for their unwavering support. He then closed out his acceptance speech by picking up a clearly overwhelmed Adonis, who started crying before walking offstage hand in hand with his father.

Their appearance together prodded fans to remember the inspiration behind Drake’s son name. After Drake confirmed on 2018’s “Emotionless” that he secretly had a baby with adult film star Sophie Brussaux, longtime fans of the rapper scrambled to figure out the baby’s name. Unfortunately, the theories that surfaced online were way off. For example, some fans wrongly thought that Drake said his son’s name in one of the most well-known lyrics of his hit song “God’s Plan.”

“I only love my bed and my momma, I’m sorry,” Drake raps on the popular track. At first listen, the assumption might be that the rapper has a great relationship with his mom and also loves to sleep. But according to HelloGiggles, instead of “my bed,” fans speculated that he was saying “Mahbed” and that the lyric was an ode to his mother and son. Per the outlet, the name apparently means “chosen one” in Romanian. And while a quick Google search can’t confirm the translation, Namelook.com says the name can mean “honesty, sacrificer, and admirer.”

Ultimately, the rumor turned out to be false. In December 2018, Drake confirmed his son’s name once and for all by sharing a photo on Instagram of Adonis’ artwork. “Adonis > Picasso don’t @ me,” he wrote in the caption.

It wasn’t until March 2020, at the start of the coronavirus pandemic, that the rapper shared photos of his son for the first time on social media. “What is most important for you right now is to connect to your own inner light,” the rapper wrote alongside a series of photos of Adonis and other members of his family. “When the mind starts to move into overthinking or fear, shift your attention right away to something bright.”

For Drake, that bright spot appears to be Adonis. During an interview with LeBron James and Maverick Carter on the HBO Sports show The Shop in October 2018, the artist opened up about fatherhood for the first time. “I have a son, he’s a beautiful boy,” Drake said, showing the NBA star a photo of Adonis on his phone. “Crazy blue eyes, baby blue eyes,” he added. These comments, of course, were a far cry from what Drake’s reps said in 2017 when rumors first swirled that the rapper had a child. At the time, his rep claimed that he did not believe the child was his, but that if he was wrong, he “would do the right thing.”

The statement from Drake’s rep came after rapper Pusha T rapped about Drake’s son in a 2018 diss track called “The Story of Adidon”: “You are hiding a child. Let that boy come home.” While the “Hotline Bling” singer didn’t immediately respond to the track, he addressed the situation on “Emotionless” when his album Scorpion came out. “I wasn’t hidin’ my kid from the world; I was hidin’ the world from my kid,” he sang.

Given Drake’s life in the spotlight and his complicated relationship with Brussaux, it’s not hard to understand why he tried to keep the news of their son private. “I am a single father learning to communicate with a woman who, you know, we’ve had our moments,” the “Toosie Slide” rapper said in his interview on The Shop, adding that he hopes to one day tell Adonis what happened between him and Brussaux. “I want [my son] to love his mother and I have to project that energy," he said.

Despite their tumultuous relationship, Drake remains committed to making sure Adonis loves and appreciates his mother, much like he appreciates his own. “I don’t have any desire for him to not love his mother or I don’t want like, I don't ever want the world to be angry at his mother,” the rapper continued. “We have found ourselves in a situation and we are both equally responsible and now, like, I'm just really excited to be a great father.”

More like this
Stormi Just Walked A Red Carpet With Mommy Kylie Jenner & Daddy Travis Scott
By Hugh McIntyre
Is Megan Fox Pregnant? MGK Gave A Shout-Out To Their “Unborn Child” Onstage
By Hugh McIntyre
Lizzo Shared An Iconic Throwback Robert Pattinson Photo With No Context
By Brad Witter
Sophie Ellis-Bextor Turned Down Being A Eurovision Judge For This Wholesome Reason
By Rachel Mantock
Get Even More From Bustle — Sign Up For The Newsletter