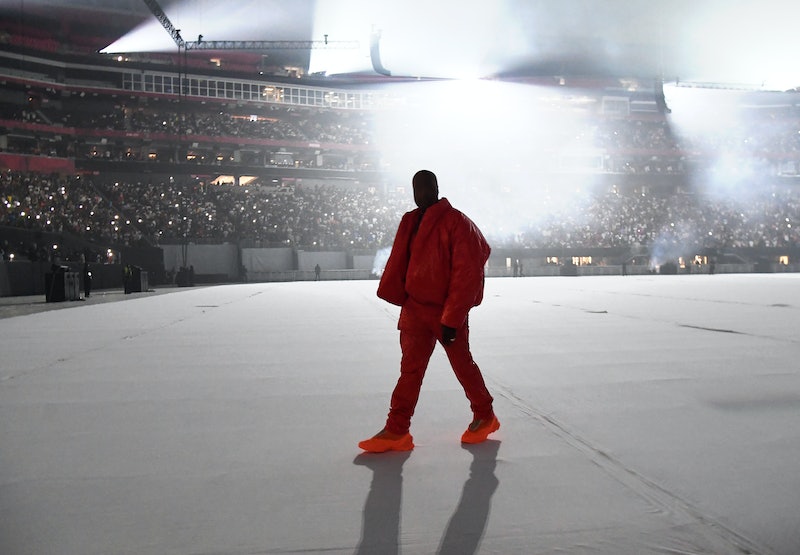 When most musicians have a new album on the way, they set a date, they share a single or two with music videos, they speak to the media, and then they release the project on the scheduled date. This is the way the typical artist, backed by major labels and large teams, has done things for decades — but Kanye West is not like most artists.

After talking about his forthcoming album Donda for more than a year and promising it repeatedly over the summer, only to disappoint fans by not actually delivering the full-length for mass consumption, the 22-time Grammy winner finally released it to the world. Even before his avid followers were treated to the new music, though, it was already one of the most-talked-about titles of the year, as the campaign was full of delays, promotional events, high-profile collaborations, and several controversies. His soon-to-be ex-wife, Kim Kardashian West, even got onstage in a wedding dress to recreate their marriage at his final pre-release listening party on Aug. 26.

What Was Donda’s Release Date?

Donda, West’s 10th solo album, was initially slated to arrive July 24, then it was backtracked one day. After the month passed, Donda was rescheduled to come out Aug. 20, then pushed back again to Aug. 27. It was later scheduled to be released on Sept. 3, with the rapper’s manager even reportedly promised it would appear then, but as we know now, the album came out on Aug. 29 instead. Shortly after the release, however, West claimed his record label released it too early: “Universal put my album out without my approval and they blocked jail 2 from being on the album,” Ye wrote on Instagram.

What Are The Donda Listening Events?

Prior to Donda’s release, West couldn’t go on tour with the album yet, but he still found a way to turn it into a live spectacle nonetheless. The hip-hop powerhouse hosted three major listening events ahead of the album drop, and while they were similar in structure to one another, each saw the musician bring something exciting to the table, such as debuting new music, welcoming special guests, and attracting massive audiences, all of whom clamored to hear the latest iteration of West’s anticipated project as he continued to fine-tune it between events.

When Was The First Donda Event?

West hosted the first listening event, titled Kanye West Presents: A Donda Listening Event, on July 22 at Mercedes-Benz Stadium in Atlanta. He announced the show just three days prior, but that didn’t stop 42,000 fans from buying a ticket to see him and hear his new music, per NME. During the event, West reportedly showed up two hours late, and as the album (as it existed at that moment) played, he basically didn’t do anything. According to those who were in the stands, the rapper largely stayed still as the tunes blasted over a sound system that wasn’t really meant for such a “performance.” At times he kneeled, and he did pace a bit, and then the whole thing was done.

The rapper’s wife (at least for the time being), Kim Kardashian West, was spotted in the stands with their children and her sister, Khloé. The married couple, who are currently in the midst of an amicable divorce, were wearing nearly matching outfits, a detail not missed by countless fans doing their everything to catch every morsel of info about the headline-grabbing event. Many speculated what it must have been like for the reality TV titan when lyrics like, “Honey, why could you leave?” and “I’m losing my family,” were heard for the first time.

After the first listening event, many people assumed Donda would drop any moment, but it did not. Instead, West continued working on the full-length, even taking up residence in a tiny locker room at the same stadium where he had debuted the music days before. As the world waited to pick up a copy of the album, he instead announced a second listening event.

When Was The Second Donda Event?

Incredibly, the Aug. 5 show, called Kanye West Presents: The Donda Album Release, was just as popular as the first, even though they were only separated by two weeks. Roughly 40,000 fans attended the second event, according to NME, and they were treated to an updated version of Donda, one which featured some new tunes, as well as a different stage. Instead of wandering around a completely empty landscape, the follow-up performance featured a handful of props — a mattress, several pairs of shoes, a candle — as well as backup dancers clad entirely in black, all of whom executed simple choreography. Celebrity fans and friends of West’s were there to enjoy the show, such as Dave Chappelle, Jay-Z, and even Kardashian West, who kept a lower profile the second time around.

When Was The Third Donda Event?

Three weeks would go by before West hosted another listening event, which took place in a new location on Aug. 26. The rapper flew to Chicago, his hometown, for this event at Soldier Field. Another 38,000 people viewed the even-more-impressive performance during this event, titled Kanye West Presents: The Donda Album Experience, per Rolling Stone. This time, the rapper recruited a whole team of dancers, and a replica of the home he grew up in was constructed in the middle of the stadium. Again, West didn’t do a whole lot during the hour-plus-long gathering, though a parade of trucks and fire helped bring the excitement.

West’s estranged wife didn’t just attend this one — she actually took part in the proceedings, and it’s her presence that may have been the most thrilling detail. It appears that she walked the stage in a wedding dress, as if she was heading down the aisle again. She and her former beau shared a special moment in front of tens of thousands, and then the whole thing was over. Even though Donda was once promised to arrive on Aug. 27, that day also came and went without the album.

Who Are The Collaborators On Donda?

Now that Donda’s track list has finally been released, his collaborators have been unveiled. The musicians that are featured include Jay-Z, The Weeknd, Lil Baby, Travis Scott, Baby Keem, Kid Cudi, Don Toliver, Lil Yachty, Syleena Johnson, Young Thug, Roddy Ricch, Swizz Beatz, and Jay Electronica, among others. The final list seemed up in the air leading up to the album’s release. Initially, there were instances of West changing tunes’ names, and at one point, Kid Cudi even tweeted that he wasn’t set to be included in the project, but then fans heard his voice not long after during the second listening event.

What Controversies Has Donda Faced?

The many delays, unconventional stage shows, and last-minute announcements surrounding Donda and its several listening events all made for compelling headlines, but they weren’t exactly controversial. Instead, West arguably gave people a number of reasons to sour on him and his latest project even before its release, based on how he conducted the programs and who he invited to take part.

At the Aug. 26 listening event, disgraced musicians Marilyn Manson and DaBaby both took to the stage, keeping largely to the porch of the replica of his childhood home. Manson recently turned himself into authorities to face charges of sexual assault, with a number of women alleging violent crimes. DaBaby angered millions when he spewed harmful comments during a concert earlier this summer that many viewed as offensive toward women and the LGBTQ+ community. Both Manson and DaBaby have been shunned by many in the music industry and have faced serious consequences for their actions and words, but that doesn’t seem to bother West right now.

Some were upset that at West’s hometown show, no one was required to show proof of vaccination in order to attend. As COVID-19 cases continue to rise across the country, putting tens of thousands of people into one space, even one as large and open as Soldier Field, can be interpreted as irresponsible and even dangerous.

After it all, though, Donda is out now.

This article was originally published on Aug. 27, 2021