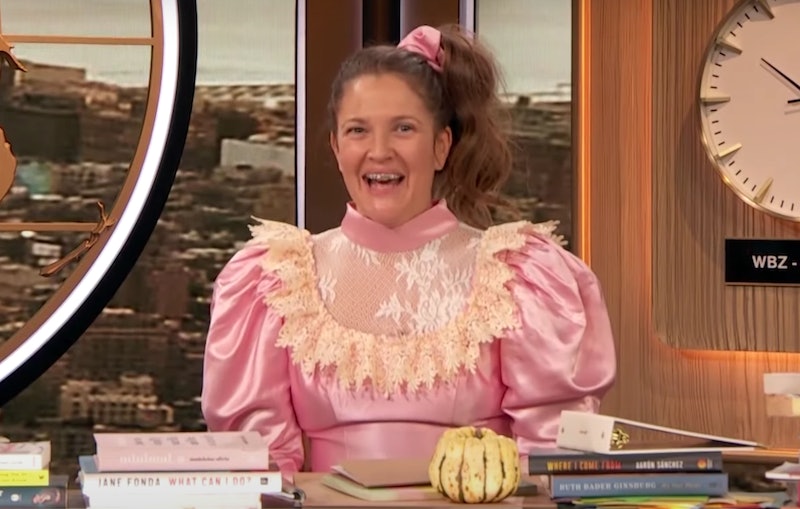 '90s kids, assemble. Drew Barrymore just revived her iconic character of Josie Geller from the hit rom-com Never Been Kissed, and let's just say she's exactly how you remember her. The actor "invited" Josie, aka Josie Grossie, to join her for the Nov. 6 episode of The Drew Barrymore Show, where the two reported on everything from the presidential election to football. And since it's been 21 years since the movie's release, it's safe to say Josie had a lot of catching up to do.

"I have a very special co-pilot today," Barrymore said at the start of the episode. "You may know her from '90s rom-com Never Been Kissed. She's a high school senior and future journalist. It's Josie Geller!" Josie, of course, was thrilled to finally be able to live out her dreams of being a reporter — all while wearing her signature side ponytail and a puffy pink dress. "You know, you didn't have to dress up for this," Barrymore said. "It's TV," Josie responded, "and it's the fanciest thing I own."

Unfortunately, Josie's outfit wasn't the only thing that was outdated; her knowledge of current events needed some work, too. "First up, the story everyone is talking about: who will be the next president of the United States?" she asked. Given that we're currently awaiting the results of the 2020 presidential election, the question wasn't that strange. But then, Josie revealed who she thought was running: George Bush and Michael Dukakis.

"Oh Josie, you've missed so much," Barrymore said. "A lot has happened since 1988." Among the things that have changed, of course, are Hollywood's biggest heartthrobs. "This next story is a little pop culture for you," the Santa Clarita Diet star teased. "A fan recently took a selfie with Harry Styles in the wild and people are loving Harry's new untamed look." Sadly, this report was met with a look of major confusion. "Who's Harry Styles," she asked. Gasp.

After explaining that Styles is kind of like the modern-day version of NKOTB's Jordan Knight, the two continued to report on sports. But things got particularly real when Josie noticed everyone in the audience wearing masks. "This is a room full of doctors. Your TV crew is all doctors," she said. "I mean, right? Everyone's wearing a mask." Oh, if only she knew what a year 2020 has been.

Barrymore and her beloved character spent the remaining minutes catching up on things like the internet and high school. "Can you at least tell me in this future world if no other girls get pranked by the popular boy in high school who throws an egg out of the sunroof of his limo?" she asked. Of course, Barrymore had lousy news: bullying still happens. But thanks to Josie, victims of bullying have someone to relate to. "A lot of people see themselves in you," Barrymore said before inviting the character to dance her way into a commercial break. "We can all get in touch with our inner Josies."