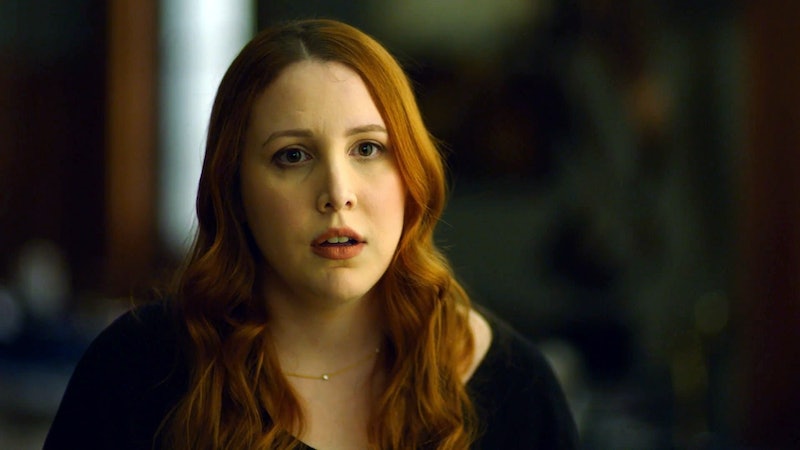 HBO’s docuseries Allen v. Farrow is largely about Dylan Farrow’s allegations that director Woody Allen sexually assaulted her when she was 7. (Allen denies the claims.) While the third episode explored the custody battle that ensued between Mia Farrow and Allen after Dylan’s accusations became public, the final episode returns to the present, with Dylan introducing her husband and daughter.

While she asked that his name not be published in a February Elle profile, audiences do meet Dylan Farrow’s husband, Sean, for the first time in Allen v. Farrow. Sean explains in the episode that when he first met Farrow around 2007, they were at a “pivotal dating moment” where they were both looking for a serious relationship. But the way they met was a bit unconventional: Sean, then a recent graduate living in New York City, was reading The Onion when he saw that it actually had a dating site powered by OKCupid. “And I thought, why not. Maybe I’ll find someone funny,” he says. So he created an “ultra, very honest post” that asserted that he was a geek but added, “You can take me out in public, and I shower, I promise.”

Farrow told Elle that she found him adorable, so “I did the thing I’ve never done before or since, and I sent him a message and flirted with the guy. I said, ‘You didn’t mention you were a cute geek.’ Winky-face emoji. I’m turning bright red telling you this.”

Sean found Farrow equally cute, and they met up at Grand Central Terminal for pie and coffee. They immediately hit it off, and after Farrow graduated from Bard College, she moved in with Sean in New York. When Sean got an offer for a job in South Florida, she followed him. They ended up getting married there in 2011 and moved to Connecticut in 2014.

While Farrow doesn’t disclose what Sean does for work, she makes it clear that he’s always supported her career choices. She worked as a production assistant at CNN when they first started dating and later was a graphic designer. Those jobs didn’t really make her happy though, and she eventually realized she wanted to be a full-time writer. “My husband was like, ‘OK, this is important to you. We’ll make it work,’” she told Elle. “He’s a champ.” (Her first YA fantasy novel, Hush, published in October 2020.)

As for Farrow’s past, Sean explains in Allen v. Farrow that when they first started dating, he wasn’t actually aware of who Farrow was and her case against Allen. It didn’t come up until one day Farrow suddenly tensed up and started crying in bed. Lying on her stomach reminded her of lying face down in the attic where Allen had allegedly assaulted her. Farrow demonstrates in Allen v. Farrow that she still has certain triggers, but when she begins to have what appears to be a panic attack in the final episode, Sean quietly holds her hand.

Today, the couple have a young daughter, named Evangeline, together. They currently live on Mia Farrow’s large farmland in Connecticut with their pug Luna and English bulldog Nova. Mia lives in a nearby house, while Dylan’s brother Fletcher, his wife, and his two daughters live in a third house on the grounds. Ronan and his fiancé, Jon Lovett, typically visit from the West Coast and stay at Mia’s place.

“There’s so much about what I’ve been through that I’ll never be able to fully explain,” Dylan Farrow says near the end of the series. But she credits Sean with providing the support and love that both she and her daughter need. “I think that the best gift I could’ve given my daughter: that she has a really wonderful father.”

More like this
The 'Love, Lizzo' Harry Styles Scene Is Just 1 Moment That Made Fans Feel Seen
By Brad Witter
'The White Lotus' Costume Designer Explains That Accidental 'Princess Diaries' Moment
By Grace Wehniainen
Everything To Know About 'The White Lotus' Season 3
By Grace Wehniainen
Everything To Know About 'Magic Mike’s Last Dance' Starring Channing Tatum
By Jack Irvin
Get Even More From Bustle — Sign Up For The Newsletter