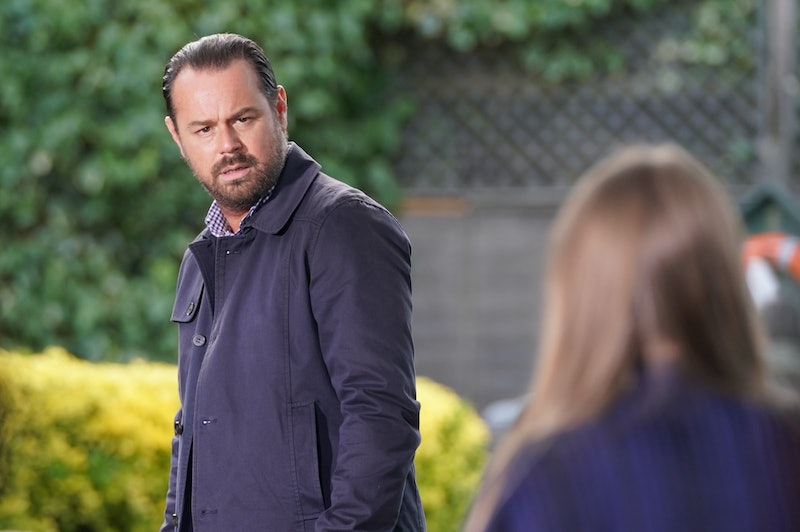 EastEnders has never shied away from a difficult storyline. Since the soap returned after a short break during lockdown it has tackled issues of domestic abuse during the pandemic, substance abuse, and family abandonment. The show's next big storyline centres around Danny Dyer's character Mick Carter, and is tipped to be one of the most impactful we've seen yet. Eastenders will explore Carter's past as a victim of child abuse.

Monday night's episode (Oct. 12) saw Frankie, played by Rose Ayling-Ellis, reveal that she is Mick’s daughter, as it becomes clear that he was abused at the age of 12. The viewers find out that Frankie's mum was a social worker, who spent time with the Carter family when Mick was young, which is when she abused him.

EastEnders executive producer Jon Sen told Radio Times: “This storyline will see Mick having to confront the demons of his past, something he has desperately tried to avoid for many years, and face up to the realisation that he experienced abuse whilst he was in care.”

Due to the sensitive nature of the subject matter, the Eastenders team worked with children's charity NSPCC and SurvivorsUK, which supports male, trans, and non-binary survivors of sexual abuse. The charities consulted on the script and storyline to ensure it was handled sensitively, and also put producers in contact with real survivors to learn about their experience first hand, and translate this into an accurate portrayal on screen. Sen went on to say the work with the charities had been "vital in informing and grounding Mick’s story very much in reality. We hope this storyline will help to challenge the perceptions, the stigma and the shame – particularly experienced by male survivors."

Speaking about working with EastEnders, Kam Thandi, head of NSPCC Helpline told Radio Times: “We know that abuse can have a devastating and often lasting impact. This storyline reinforces how difficult it can be for those who are victims of non-recent abuse to process and come to terms with what has happened to them. It can also be hard for men to speak openly about these experiences, particularly when the perpetrator is female.”

More like this
Armani Jackson Is Following In His Famous Actor Sister’s Footsteps
By Catharina Cheung
The Banned 'Friends' Ad Shows Monica As You’ve Never Seen Her Before
By Sam Ramsden
Con O'Neill Was Connected With Sarah Lancashire Long Before 'Happy Valley'
By El Hunt
'Bridgerton' S3 Will Show A *Very* Different Side To Kanthony
By Sam Ramsden
Get The Very Best Of Bustle/UK
Sign up for Bustle UK's twice-weekly newsletter, featuring the latest must-watch TV, moving personal stories, and expert advice on the hottest viral buys.