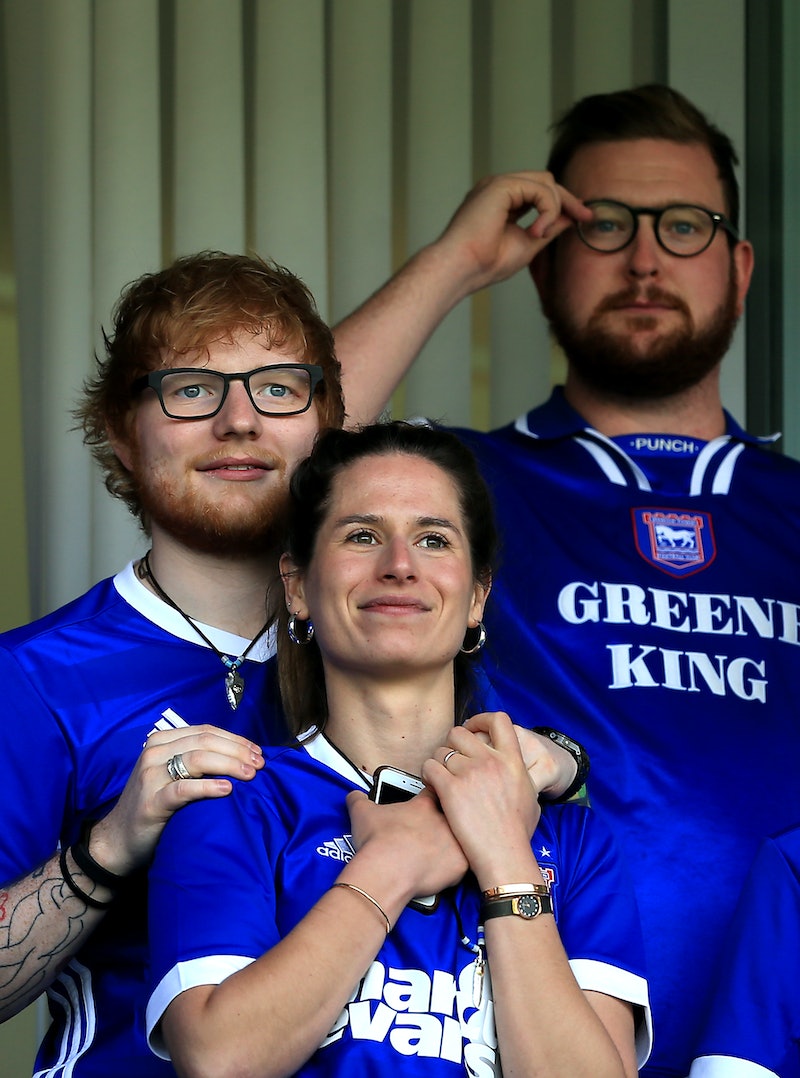 “I’ve known Cherry since I was 11,” Ed Sheeran explained to People in March 2017 in an interview that saw him open up about the love of his life. Sheeran and Cherry Seaborn’s relationship timeline goes back at least 15 years, as the two were childhood friends. While they were introduced to one another very early on, it would take a long time before the romance between them officially began.

The two attended high school together in England and were good friends as teenagers, as Us Weekly reports. After that, though, they seemingly went their separate ways as Sheeran launched a career in music and Seaborn moved to the United States, where she earned several degrees and began working on Wall Street in New York City.

Now, six years after a chance reunion, the pair are married and have a baby. They seem happier than ever as a married couple and as parents, and while he’s usually pretty private, Sheeran hasn’t been too shy regarding all the love in his life.

Here’s a look at how they went from friends on the playground to the loves of each other’s lives.

In July 2015, Sheeran claimed to be single after having broken up with his previous girlfriend, Athina Andrelos, a few months before. During a radio interview on Capital Breakfast, the “Castle on the Hill” singer said, “It’s actually nonexistent at the moment,” when asked about his romantic life. He continued, “My [last] relationship ended and then I went to the Middle East, Asia, South America. I was just gone and my mind had no time to just settle with it. So I was just working, working, working.”

Either something changed pretty quickly or Sheeran was downplaying his relationship status, because he and Seaborn started showing up in photos together very soon after he made that statement.

While speaking with People in the aforementioned interview, Sheeran reflected on how he and Seaborn went from childhood friends to being romantically involved. “She worked on Wall Street in New York,” he explained, before noting that in 2015 he had a string of six concerts in NYC.

“It was around then,” Sheeran continued. “We reconnected. I went on tour again, and then I went to Taylor’s 4th of July party. I was texting [Seaborn], and she was like, ‘I’m in Rhode Island at a 4th of July party,’ and I was like, ‘So am I.’” Sheeran then asked Swift if he could invite Seaborn to her party, and apparently she said yes, because like Sheeran told People, “The rest is history.”

September 2015: Hanging Out Together In Public

Seaborn showed up in Sheeran’s Instagram feed on Sept. 7, 2015, just a few days after the two were photographed sitting front row at a Mets game at Citi Field in New York City. At the time, Seaborn was referred to as a longtime friend or “pal” of Sheeran by media outlets, but some began speculating that they might actually be dating.

May 2016: Traveling And Holding Hands

While Sheeran and Seaborn began dating in July 2015, they kept their romance relatively private for another year or so. It was during the summer of 2016 that they began traveling together and being seen in public more often. In May, they were even spotted holding hands while on a trip to Australia, according to the Daily Mail.

A few weeks later, the couple celebrated their one-year anniversary, as was evident from the banner that Swift made for Sheeran and Seaborn. Another one of Swift’s friends, Abigail Anderson, shared the banners that Swift had made for a few of her besties, including Anderson, as well as one in the back that appears to be wishing Sheeran and Seaborn a happy anniversary.

December 2016: Moving In Together

Toward the end of 2016, Sheeran and Seaborn reportedly reached a major relationship milestone. Seaborn returned to the United Kingdom to move in with Sheeran, according to The Sun.

March 2017: Singing About Seaborn And Hinting At Marriage

On March 3, 2017, Sheeran released Divide, and a number of the songs on the album are reportedly about Seaborn, including “Perfect” and “Shape of You.” While promoting Divide, Sheeran did an interview with KIIS FM’s Kyle and Jackie O Show, and according to Entertainment Tonight, when asked about potentially marrying Seaborn, he claimed he felt “pretty good about it.”

Sheeran doesn’t post a lot of photos of Seaborn to social media, but in July 2017, he shared a shot of them traveling in South America. “Climbing mountains in Peru,” Sheeran captioned the pic.

Kicking off 2018 on a high note, Sheeran announced his engagement to Seaborn. “Got myself a fiancé just before new year,” he wrote on Instagram on Saturday, Jan. 20, confirming that he and Seaborn had gotten engaged at the end of 2017. He shared a photo of himself and his bride-to-be with the caption also reading, “We are very happy and in love, and our cats are chuffed as well.”

After announcing their engagement just a month prior, Sheeran started the rumor mill, with many suggesting that the musician was already married. While walking the red carpet at the 2018 Brit Awards (where he was nominated for several top prizes), the superstar was spotted with a silver band on his finger — his left ring finger, that is. This not-so-hidden declaration of love got people talking, and every time someone snapped a photo with him and he was wearing it, the chatter continued.

August 2018: Sheeran Hints He May Already Be Married

During a sit-down interview with Access to promote his Apple TV+ documentary, Songwriter, Sheeran finally admitted (in his own way) that he was, in fact, married. When asked if he and his fiancée had set all the details for their forthcoming nuptials, the Grammy winner blushed, looked around, and pointed to the ring on his finger. Obviously surprised, the off-camera interviewer asked how he’d managed to pull off such a feat. Sheeran admitted that he would “never really do anything too public anyway.”

The details surrounding Sheeran and Seaborn’s wedding are hard to pin down, but it appears their actual wedding may have taken place in January 2019. It’s possible that the two were legally married months before their ceremony, which was reportedly very small. In fact, there were apparently only about 40 people in attendance, with the guest list being limited to very close friends and family.

Nine months after they admitted to the public they were officially married and perhaps a year or more after they officially tied the knot (though it’s so hard to tell!), Sheeran and Seaborn held a fantastic wedding reception for a much larger crowd than their other celebrations. The couple decided on a carnival theme, and they invited fellow celebrities like Jennifer Aniston, Elton John, Sam Smith, Stella McCartney, and Princess Eugenie to party with them.

Sheeran isn’t one to open up much to the public about what’s happening in his personal life, at least beyond his songs, but he broke that trend in August 2020 when he shared that he and his wife were expecting their first baby. Just before the global COVID-19 pandemic struck, the chart-topper announced he’d be going on something of a hiatus after an extremely long promotional period and a tour that went on for years. Apparently he and Seaborn used their time together to start their growing family!

Just one month after the pair admitted that a new addition to their family was en route, the married couple revealed she had already arrived! On Sept. 1, 2020, Sheeran returned to Instagram after not posting once that year to announce the birth of his daughter, Lyra Antarctica Seaborn Sheeran. The “Perfect” singer wasn’t shy about sharing how well things were going, adding, “Both mum and baby are doing amazing and we are on cloud nine over here” to the caption.

October And November 2021: Publicly Talking About His Wife

As Sheeran promoted his new album, = (pronounced Equals), he took part in a number of interviews, and several journalists asked how things were going as a married man and a dad. The “Shivers” powerhouse wasn’t afraid to admit his love for both new roles, and he took every opportunity to point out how amazing his wife is. In various chats, he has shared that despite now being married to an incredibly wealthy man, Seaborn continued to work, and the singer pointed out that she is at “the top of her field” in the finance world. He also gushed over watching her play sports, which she still does recreationally.

Sheeran joined his friend and collaborator Elton John on the latter musician’s Apple Radio program Rocket Hour to talk their new single “Merry Christmas” and the special time he spends with his daughter, Lyra.

“Me and my daughter do vinyl breakfast every single day,” he said. “Where over lockdown, I got super into vinyl, I know you are super into vinyl too. But I basically would get up with her in the morning, I’d make her breakfast, and then we’d sit down and eat together and listen to a vinyl. And this is her favourite. She just loves this album [Black Sabbath’s Paranoid]. So, I think ‘War Pigs’ is such a great way to start a record.”

At the 2022 BRIT Awards, Sheeran was nominated for four competitive awards, but he ended up losing all of them to Adele and Dua Lipa. Don’t feel too bad for him, though, as he already had half a dozen trophies sitting on his shelf at home before he entered the show, and he did end up collecting Songwriter of the Year. Seaborn joined him at the ceremony in something of a rare public appearance.

This article was originally published on Jan. 20, 2018