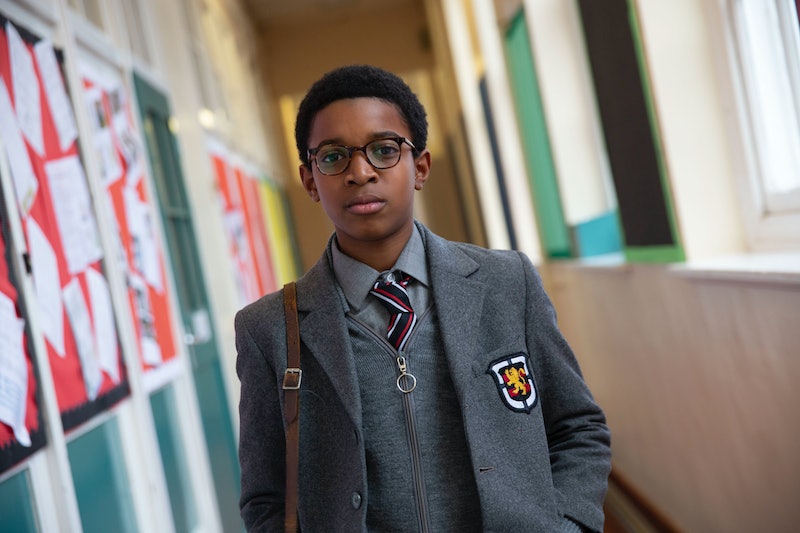 The fifth and final film from Steve McQueen's Small Axe anthology follows the coming of age story of London schoolboy Kingsley, who is transferred from mainstream education into an institution reserved for those with "special needs." Soon it becomes clear that an unofficial segregation policy is at play, forcing a group of West Indian women to take matters into their own hands to ensure Black children receive the same level of education as their peers. But, what else is there to know about this chapter of the BBC anthology? And where is Small Axe: Education filmed?

As noted in a BBC press release sent to Bustle, Education was primarily filmed in Wolverhampton, despite being set in 1970s London. The crew decided Wolverhampton had more to offer to fit the 1970s aesthetic than the capital. "Within an ordinary-looking street of suburban houses, or council flats, the un-gentrified nature of Wolverhampton gave Shabier Kirchner the opportunity to shoot from more angles than most locations in London offered," said production designer, Helen Scott.

“Education is the very touching story of a boy struggling to overcome his dyslexia. We filmed in Wolverhampton and it felt appropriate to keep Kingsley’s world contained and small, so as not to conflict with his imaginative world," Scott added.

Education is one of two Small Axe productions to be filmed in Wolverhampton. The other being Red, White and Blue starring John Boyega, which centred on the true story of Leroy Logan — one of the first Black British officers in a notoriously racist Metropolitan police service.

As previously mentioned, the film centres on an imaginative 12-year-old boy named Kingsley, who is transferred to a so-called "educationally subnormal" school. The character of Kingsley is portrayed by newcomer Kenyah Sandy, who Oscar-winning director and Education co-writer Steve McQueen described as "exceptional and a "wonderful actor who takes direction but also adds his own tilt on things.

McQueen added: "[Sandy] brings the character to a whole other level and for him to do be doing that at 12 is remarkable.”

Commenting on his experience working on the film, Sandy explained that his love of McQueen's previous work is what initially excited him about the project.

"I also remember being told by my Mum that he directed 12 Years A Slave which I know was an incredible film, so I was really excited to work with Steve." He added: "It was incredible on set. It was definitely overwhelming at the start because it was all so new to me, but with such a good cast and crew, they made me feel welcome and comfortable.”