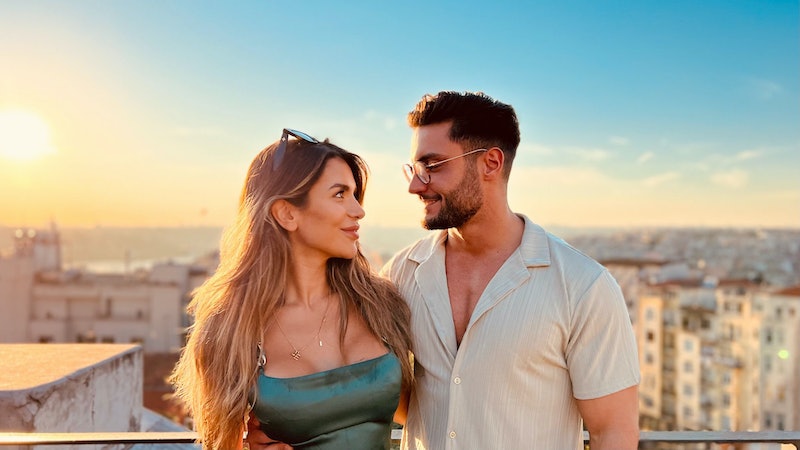 Ekin-Su Cülcüloğlu and Davide Sanclimenti stole the nation’s hearts when they won Love Island 2022 over the summer. Now, fans have been treated to even more of the couple as their hotly-anticipated travel show, Ekin-Su & Davide: Homecomings, has premiered on ITV2. In the first episode of the two-part series, Davide took Ekin-Su to his home country of Italy to show her some of its most romantic sights and introduce her to his family.

However, the journey began with a little hiccup when Ekin-Su decided to scroll through Davide’s phone and found photos of him with some girls at an afterparty in his flat. All was quickly forgiven, however, when they went out for some Italian carbonara the next day. The Love Island callbacks kept coming in that regard, with Ekin-Su professing her love for Davide in Verona on the balcony, said to have inspired Romeo & Juliet. After writing letters to Juliet for love advice, the couple spoke of their future, with Davide clarifying that he’ll only propose once Ekin-Su learns how to eat pasta properly. Marriage was brought up a lot by Davide during the first episode, interestingly.

After their trip to Verona, the pair made their way to Florence, where fans bombarded them. They then spent the night in a vineyard, a decision made by Davide as a callback to their memorable first date on Love Island, before visiting Davide’s family. Despite some nerves, Ekin-Su fit perfectly into Davide’s family unit, making homemade gnocchi with the help of his mum Nadia and grandmother. “I realised Davide’s family is really similar to my family,” Ekin-Su told ITV2. “I learnt that he has some amazing family values and has a pure heart which I really loved.”

As viewers patiently wait for the second episode, which sees the couple in Turkey as Davide meets Ekin-Su’s family, below are the best memes and tweets reacting to their time in Italy.

More like this
'Love Island' Has Added Yet Another Bombshell To The Villa
By Bustle UK
This Pre-'Love Island' Video Of Olivia & Zara Together Changes Everything
By Bustle UK
Molly-Mae & Tommy Fury Revealed Their Baby Girl's "Really Unusual" Name
By Sophie McEvoy and Sam Ramsden
ITV’s New Take On 'Love Island' Is Only For MILFs & DILFs
By Sam Ramsden
Get The Very Best Of Bustle/UK
Sign up for Bustle UK's twice-weekly newsletter, featuring the latest must-watch TV, moving personal stories, and expert advice on the hottest viral buys.