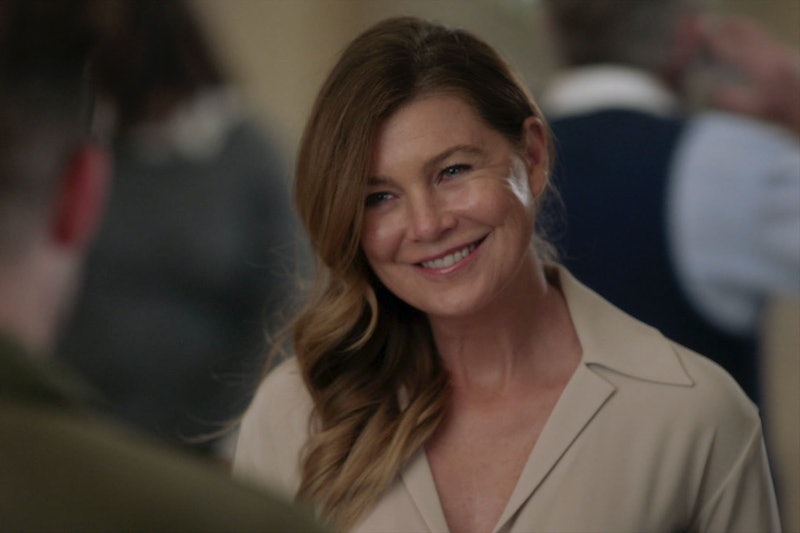 So nice, she wore it twice. During an Oct. 7 Jimmy Kimmel Live interview, Ellen Pompeo confirmed a Twitter fan theory that Meredith Grey was wearing the same button-down shirt during her Minnesota visit in the Grey’s Anatomy Season 18 premiere as she did during the ABC medical drama’s inaugural season in 2005. “When that shirt showed up on my wardrobe rack, I said, ‘Is this the same shirt?’” the actor recalled to the late-night host. What’s more, there are still plenty more throwback Grey’s Anatomy Easter eggs to come this season — and Pompeo said she’s on the same hunt as viewers.

“It was my idea to pay homage to many things and many different seasons and to give the audience things to watch out for and to plant Easter eggs,” she explained, adding that the hidden gems are often a mystery to her as well. “So I even look for them, because it was just my idea. I didn’t necessarily say, ‘Let’s do this and this.’ I wasn’t specific about it.”

Eagle-eyed fans on social media also spotted a possible parallel between Meredith’s interaction with new love interest Nick Marsh (Scott Speedman) and one with her late husband, Derek Shepherd (Patrick Dempsey). After Meredith told Nick, “I’m not sleeping with you” during their reunion in the lobby bar of her hotel, several other Twitter users pointed out that she said something very similar (“I’m definitely not sleeping with you again”) to Derek in the early days of their courtship.

Another Easter egg that required much less sleuthing was already teased in ABC’s first look at Addison Montgomery’s (Kate Walsh) return to Grey’s Anatomy. “You must be the group that’s been screwing up the program,” Addison tells the fledgling (and starstruck) Grey Sloan residents in the Oct. 14 episode’s promo. In the inaugural season, Addison greeted Meredith similarly: “And you must be the woman who’s been screwing my husband.”

Naturally, all the callbacks to earlier seasons (coupled with Meredith’s many Season 17 beach reunions with beloved deceased characters) have only fueled rumors that Grey’s Anatomy will end after this season. While walking the 2021 Primetime Emmys red carpet in September, Pompeo hinted to Entertainment Tonight that fans are “not far off” in predicting that the end is near.

“I mean, I’ve been trying to get away for years,” she told ET. “It’s not because I haven’t been trying. I have strong relationships at the network and they have been very, very good to me, and have incentivized me to stay.” However, the actor hinted that “creatively, as long as there’s something to do,” the series could still continue: “Miraculously, we keep coming up with ways to have a reason to stay and if there’s a reason, that warrants it.”

More like this
Jennifer Lopez & Ben Affleck’s Officiant Spilled The Tea On Their Wedding
By Sophie McEvoy
'Friends' Star Maggie Wheeler Offers Support To Matthew Perry After Reading His Memoir
By Alyssa Lapid
Ashton Kutcher Wants Danny Masterson “To Be Found Innocent” In Rape Retrial
By Jake Viswanath
At 28, Debra Jo Rupp Was Living A Much Different '70s Show
By Grace Wehniainen
Get Even More From Bustle — Sign Up For The Newsletter
From hair trends to relationship advice, our daily newsletter has everything you need to sound like a person who’s on TikTok, even if you aren’t.