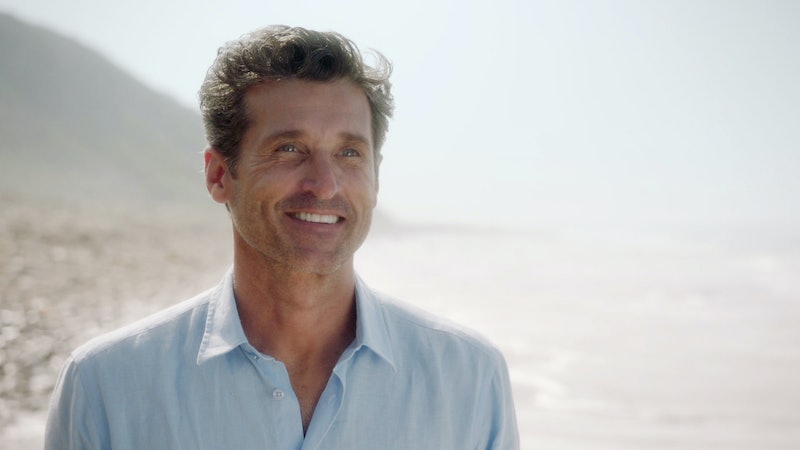 Spoilers ahead for Grey's Anatomy Season 17. Regardless of what Meredith’s ultimate fate may be, Derek’s latest Grey’s Anatomy beach appearance made clear the tide is about to turn one way or the other. Following Teddy’s unsuccessful attempt to take her off a ventilator, Meredith seems to be staring down two very clear futures: an eternity with Derek in her imaginary seaside paradise, or a return to her kids — and a romantic future with newest beach visitor Hayes (aka McWidow), perhaps? (Sure, Meredith’s relationship status seems like a trivial matter as her life literally hangs in the balance, but it is Grey’s, after all.)

“It’s you again,” an amused Meredith greeted Derek, with about as much enthusiasm as anyone could muster in the wake of DeLuca’s tragic murder. It was Derek’s response, however, that had fans jumping out of their seats (and grabbing their tissues). “You look just like Ellis just now, the way that you’re looking at your feet. So serious,” he said, fishing pole in hand. It soon became clear that Derek wasn’t referring to Dr. Ellis Grey, but rather his and Meredith’s daughter who never got to meet before his own shocking death.

“She looks just like, you,” he added, going on to describe Ellis’ personality to a tee. Proving he really has been with his family all along, Derek didn’t leave Zola out either. Recalling the time Meredith tried to teach their other daughter how to ride a bike, he also poignantly revealed that “brilliant” Zola still writes him letters in her journal.

Then, Derek told Meredith she looked “perfect,” just as the faint sound of Hayes begging Meredith to fight for her kids began to break through the fantasy. “That’s up to you,” Derek told Meredith — though she didn’t say a word out loud. “But if you’re asking me, you should hear him out.”

With Derek’s blessing, Hayes appeared on the beach. Just as Meredith’s late husband had done not long beforehand, he began by observing how much Meredith and Ellis look alike. Coincidence? After recounting his adorable interactions with Ellis, Bailey, and Zola, as they’ve been video-chatting with their unconscious mom, Hayes made his point: “They need you, Grey. They need you to fight. We all need you to fight.”

Meredith’s response? “I don’t know that I can,” she said.” It’s so warm here. The water is so cool. I feel so relaxed, and there’s no pain.” As Hayes’ voice began to fade again, Derek reappeared, saying, “It’s OK. I’ll be right here.”

So what does it all mean? As Meredith showed signs of waking up, it seemed she’d chosen to return to the land of the living. But not so fast. Soon afterward, viewers were shown and image of MerDer — back on the beach — sitting dangerously close to on another on a log. If you believe that once they’re finally able to physically touch, that will mean Meredith has died, this could certainly be a worrying development.

Regardless, Hayes’ love for Meredith and Derek’s kids seemed evident in their chat, so maybe Derek’s blessing could have an even deeper meaning. That is, of course, depending on whether or not Meredith pulls through in the end. Either way, by Grey’s showrunner Krista Vernoff’s count, fans can still expect to see Derek one more time before Season 17 comes to a close.

More like this
'Friends' Star Maggie Wheeler Offers Support To Matthew Perry After Reading His Memoir
By Alyssa Lapid
Ashton Kutcher Wants Danny Masterson “To Be Found Innocent” In Rape Retrial
By Jake Viswanath
The Banned 'Friends' Ad Shows Monica As You’ve Never Seen Her Before
By Sam Ramsden
'Abbott Elementary' Fans Probably Missed This 'Parent Trap' Easter Egg
By Sam Ramsden
Get Even More From Bustle — Sign Up For The Newsletter
From hair trends to relationship advice, our daily newsletter has everything you need to sound like a person who’s on TikTok, even if you aren’t.