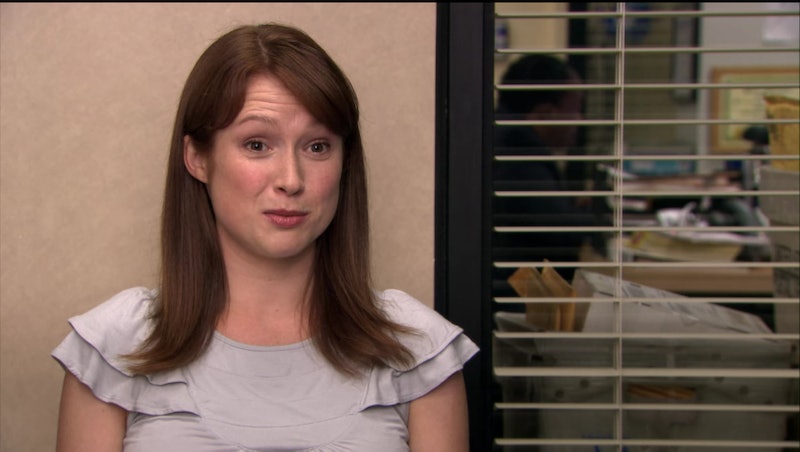 When Jim and Pam's will-they-or-won't-they storyline wrapped up, fans were eager for another office romance, but Andy and Erin never quite lived up to the iconic duo. It turns out Ellie Kemper wasn't a fan of Andy and Erin dating on The Office either. Kemper, who joined The Office in Season 5, said she didn't think her character, Erin, a Dunder Mifflin receptionist, was meant to end up with Andy Bernard during a recent appearance on The Oral History of the Office Podcast. She said that the couple was not "a good match," as per Uproxx.

Kemper told host Brian Baumgartner that Andy "was a bit too childish" to be a good match for Erin. "He wasn’t ready to take care of Erin," she continued. "Erin was ready to take care of Andy, but I felt that it was uneven in that respect." Erin initially began a romance with Andy after being hired at Dunder Mifflin in Season 5, but the two broke up in Season 6. She goes on to date regional coordinator Gabe Lewis, but he was notoriously boring, and Erin ended the relationship in front of the whole company at the Dundie Awards in Season 7.

Erin might not have found her soulmate on The Office, but that doesn't mean the other actors and producers didn't pitch plenty of romantic plotlines for with the new receptionist. Baumgartner, who played Kevin on the sitcom, asked Kemper if she knew he had, "pitched Kevin and Erin getting together." Kemper went along with her former costar, joking that it "would be a pretty reasonable relationship." Baumgartner said he even, "went up to the writers’ room" with the pitch, telling the showrunners, that "if Kevin could mature just a little, there was something about their energy that I thought was right." He added: "Their energies matched in a weird way."

Fans might not be on the same page about Erin and Kevin getting together, but Kemper, on the other hand, seemed to think the coupling was a great idea. She said: "That actually makes perfect sense to me. I love that pitch." Baumgartner agreed, noting that it's a shame fans of the show would never get to witness, "the great love story that Kevin and Erin could have been."

The Office stars have met up on several other occasions as of late, including a reunion on John Krasinski's Some Good News in May, and in April, Ed Helms and Rainn Wilson reunited to sing their "Country Roads" duet from the show, as per Insider. There might be even more reunion content in the future — a The Office reunion special is being considered for NBC's streaming platform Peacock, as per ScreenRant, so fans will have to stay tuned to find out if Ed Helms, who played Andy, agrees that his character's relationship with Erin was not meant to be.