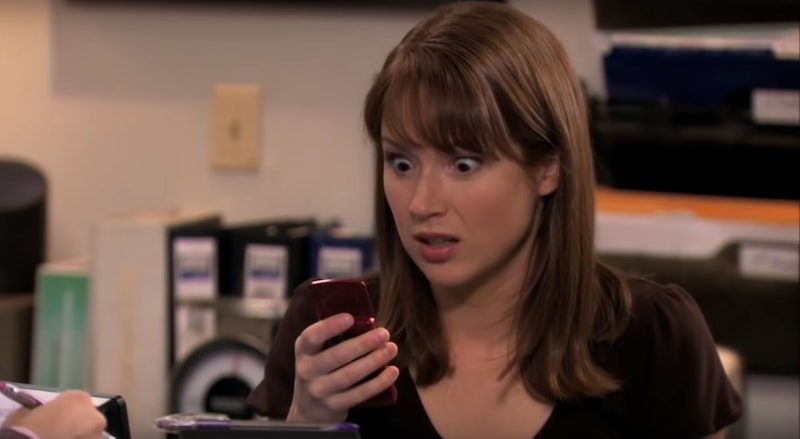 Like a bag of Professor Copperfield’s Miracle Legumes, The Office revival talk may never disappear. In a new interview with E! News, Ellie Kemper commented on The Office reboot rumors have been at fever pitch since the end of last year. While she isn’t so certain a reboot would actually happen, the Unbreakable Kimmy Schmidt star kept things as upbeat as possible. How Erin Hannon of her.

If the revival actually were to come to fruition, Kemper would be on board, but she is not sure what Erin’s present-day life would look like. She said to E!,

She also revealed that she hopes Erin ended up in a relationship with someone other than Peter (Jake Lacy) or Andy (Ed Helms). “I think that both of those guys were great,” she explained, “but she could’ve found a better fit for her.”

Back in December of last year, TV Line reported NBC was apparently working on a The Office reboot. This scoop left fans and show alums buzzing for months, but nothing's come of it. Sure, it could happen one day, but the wheels aren't officially in motion right now. As NBC Entertainment chairman Robert Greenblatt recently told Vulture,

“I hesitate to speculate about the future of more of The Office because every time I do, there’s a headline that says, ‘The Office reboot is coming,’ and it really isn’t. But I have conversations with Greg Daniels occasionally and I keep saying that we would love to have more of the show. It’s possible that could happen over the next couple of years. He just got a show picked up at Amazon so I don’t think anything’s in the cards immediately, but it’s an extraordinary show and I would love to say that it’s coming back — although I hope you don’t say that!”

While many of Kemper's The Office co-stars would be down to return to the show, there is one key member of the ensemble who is not interested in going back to Dunder Mifflin. Steve Carell, who played Michael Scott on the sitcom for seven seasons, has said a number of times that he thinks the show should be left as is. In a 2017 interview with Entertainment Tonight, he said he believes fans would "want it to come back and be exactly the way it was," only to be "be disappointed." And in Esquire's November 2018 issue, Carell said "it might be impossible to do that show today and have people accept it the way it was accepted ten years ago," noting that Michael Scott's whole deal "was predicated on inappropriate behavior."

"That’s the point, you know? But I just don’t know how that would fly now. There’s a very high awareness of offensive things today—which is good, for sure. But at the same time, when you take a character like that too literally, it doesn’t really work.”

Ready for a bold prediction? IfThe Office were to return at some point down the line, the World's Best Boss would not be involved.

But if the reboot idea does become a reality? Get your disposable cameras ready, because it sounds like most of the World's Best Paper Sales Staff could be there with bells on.