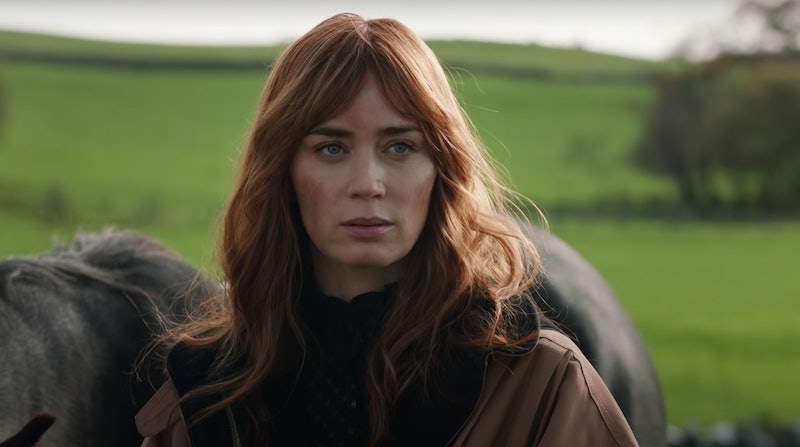 Wild Mountain Thyme is the rural Irish rom-com set to hit the big screens in the UK on Dec. 11, 2020. The cast is seriously star studded – and director John Patrick Shanley is an Academy Award winner – but Wild Mountain Thyme has been hitting the headlines for different reasons. Irish fans have had a few things to say about the characters' accents and now Emily Blunt has responded, admitting the County Mayo dialect was “tricky” to master.

Wild Mountain Thyme stars Emily Blunt, Christopher Walken, John Hamm, and Jamie Dornan and is set on a farm. And ever since the trailer aired, Irish movies fans across the internet have been trying to work out exactly the cast got their vocal training.

One wrote on Twitter, “Hot take: Mr. Krabs’ accent is more Irish than anyone in Wild Mountain Thyme.”

Another said, “The amount of incredible talented Irish actors we have that don't need to fake an accent and Wild Mountain Thyme do that. I'm sorry that's a disgrace. Why does Hollywood always insist on doing that?”

When the Irish radio show Liveline rated the accents, Jamie Dornan’s was ranked worse, with one caller saying, per GQ, “I don't know what they do to your vocal cords, is it genetic or what, but I just don't think it's possible to wrap your tongue around a Republic Of Ireland accent.” Blunt came in at a close second.

Speaking to the Hollywood Reporter, Emily Blunt responded to the criticism and admitted the accent was one of the hardest parts of the role.

"If you think about England, there’s a hundred accents or more," the actor said. "I don’t know how many accents there are just in England, and it’s the same in Ireland. I think there’s 50-to-100 different accents just in Ireland. Even in Dublin, there’s North and South Dublin, and they sound completely different,” she told the publication, “so we were doing a very specific midland, rural, quite thick accent to learn, and it sounds completely different from a Metropolitan, sort of Dublin Irish accent."

She revealed that it wasn’t just the non-Irish cohort of actors that struggled. “Even for Jamie, who’s from Belfast, he has a completely different accent from how he spoke. So accents are tricky. You just do your best and that’s all you can hope for."

Wild Mountain Thyme tells the story of Anthony (played by Dornan.) He works on his family farm but, disenfranchised with their work, his father (Walken) is thinking about selling it to an American cousin (Hamm). Blinded by his situation, Anthony fails to notice that Rosemary (Blunt) is helping him because she loves him. But when Adam arrives in Ireland, he’s set on winning her over. Sounds like a tumultuous love triangle to me.