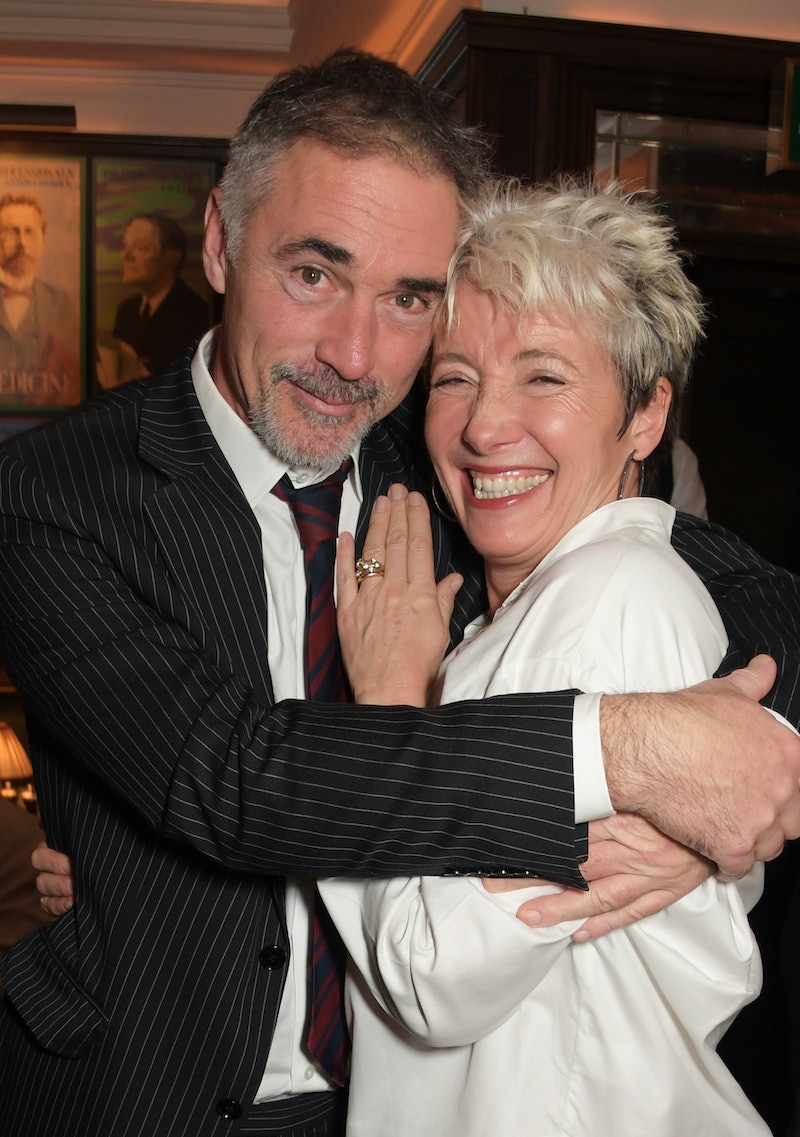 Before he began shooting his first big movie, the 1995 adaptation of Jane Austen’s Sense and Sensibility, Emma Thompson's now-husband Greg Wise received a psychic prediction from a friend that he'd meet his future wife on the film's set. While that prophecy proved to be very much true, it didn't quite go down the way Wise expected. At the time, Thompson, who played Elinor Dashwood, was married to actor Kenneth Branagh, and so Wise had his sights set on another famous costar: Kate Winslet.

“Everyone else on the film set was married,” Wise — who recently played Lord Louis Mountbatten in Netflix's The Crown — revealed in a 2014 interview with The Express. “So I thought, ‘It has to be Winslet.’ I asked her out. We went to Glastonbury festival together. But it was the wrong call.”

The same year that Sense and Sensibility hit theatres, Thompson and Branagh divorced — and it was actually Winslet who helped make a love connection for the currently married couple. To this day, they remain close friends with the Titanic star.

“She pointed out that we were right for each other and told me that Emma’s marriage was over,” he added. “It was all meant to be, just as my friend Helen had predicted."

Their coupling ultimately helped Thompson heal at what she's described as a time of great pain. The end of her six-year marriage to Branagh came amidst rumours that her husband had begun an affair with Helena Bonham Carter on the set of Mary Shelley’s Frankenstein. In fact, Thompson has even said that the heartbreak inspired one iconic scene from her 2003 film, Love Actually in which her character discovers her onscreen husband's infidelity.

“I had my heart very badly broken by Ken,” Thompson said in 2018, per the Telegraph. “So I knew what it was like to find the necklace that wasn’t meant for me. Well, it wasn’t exactly that, but we’ve all been through it.”

In a separate Telegraph interview, she elaborated: “I’ve had so much bloody practice at crying in a bedroom. Then having to go out and be cheerful, gathering up the pieces of my heart and putting them in a drawer.”

What followed, of course, were much happier times. After nearly eight years of dating, Wise and Thompson were married in 2003 at a ceremony in Dunoon, Scotland. Their daughter Gaia, who was born in 1999, even acted as the flower girl at the ceremony, per Hello! magazine.

The same year, Thompson and Wise adopted a son named Tindyebwa Agaba (or Tindy, for short), a former child soldier from Rwanda who was 16 years old at the time. According to the Daily Mail, Tindy's father had died from AIDS when he was nine and his mother and sister were listed as missing during the 1994 Rwandan genocide. With the help of a humanitarian charity, the boy was able to flee to the UK where he eventually met Thompson and Wise.

As far as the couple's longevity — having now been together more than two decades — Thompson has talked about having some non-traditional views on relationships. Speaking to the Telegraph in 2013, Thompson wondered whether there are alternative views to monogamy, which she describes as an “odd state” to be in. “I think that we’re locked into certain ideas and certain romantic ideals that have shaped our thinking about relationships for some time,” she said, adding that she wonders “whether our fury and rage and disbelief and horror about infidelity is quite realistic.”

Wise later addressed his wife's remarks in a 2014 Daily Mail interview — clarifying that he's "never not been" monogamous.

Even so, the pair may have benefited from what Thompson has called marriage sabbaticals. As Wise elaborated, "Actors have sabbaticals all the time because you're away working. There are always going to be periods of time when one of you is having a completely different life to the other."

Whatever their trick may be, Thompson and Wise certainly seem to have discovered the secret to a happy marriage. And theirs all began with a psychic vision — plus a little help from Winslet.

This article was originally published on June 18, 2019