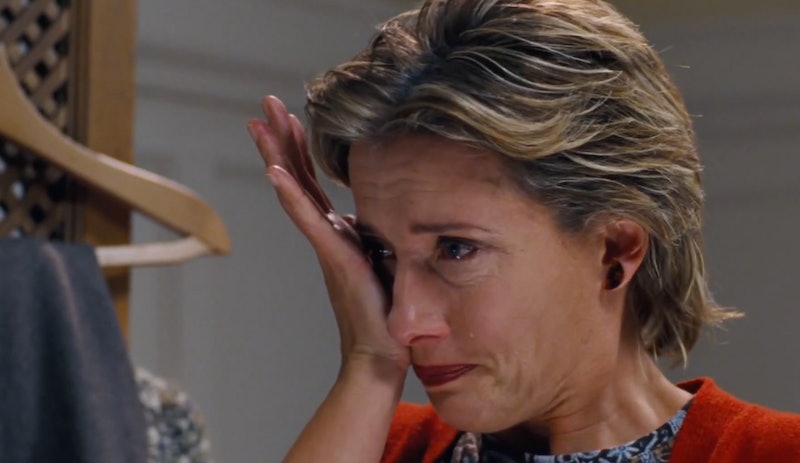 From the giant "To me, you are perfect" cue card to Hugh Grant's British Prime Minister dancing down a staircase, 2003's Love Actually is filled with iconic moments. But it was that heartbreaking Emma Thompson Love Actually scene that's still giving fans all the feels — even 16 years later. You know, the one where Thompson’s character, Karen, realizes that her husband (played by the late Alan Rickman) is having an affair and bought a beautiful necklace for his mistress and only gave poor Karen a CD. Then, as Joni Mitchell’s “Both Sides Now” plays in the background, she has a brief breakdown before wiping her tears and returning to her family.

As mentioned by host Ali Plumb, Game of Thrones star Kit Harington is among the people who were deeply affected by her raw performance. Calling Thompson "acting royalty," Harington divulged in a W magazine video interview from 2016 that, although "it's a weird one," the aforementioned Love Actually scene is his "favorite moment in any film." He added: "By the time she's left the room and comes back, everything in her life has changed. But nothing has, at the same time, and it's beautiful acting."

When Thompson said that we've all been there, she wasn't excluding herself in that statement. In fact, she's admitted that her own real-life pain inspired her onscreen emotions in the bedroom scene. “I had my heart very badly broken by Ken,” she said of her ex-husband, actor Kenneth Branagh, in 2018, per the Telegraph. “So I knew what it was like to find the necklace that wasn’t meant for me. Well, it wasn’t exactly that, but we’ve all been through it.” (The pair divorced in 1995 after six years of marriage, amid rumors that Branagh had an affair with Helena Bonham Carter on the set of Mary Shelley’s Frankenstein.)

In a separate Telegraph interview, the actor — who will next star alongside Mindy Kaling in Amazon's Late Night — elaborated on how she channeled her heartbreak in Love Actually: “I’ve had so much bloody practice at crying in a bedroom. Then having to go out and be cheerful, gathering up the pieces of my heart and putting them in a drawer.”

So, the next time you find yourself dabbing your eyes while watching Love Actually, now you'll know that Thompson is right there with you.