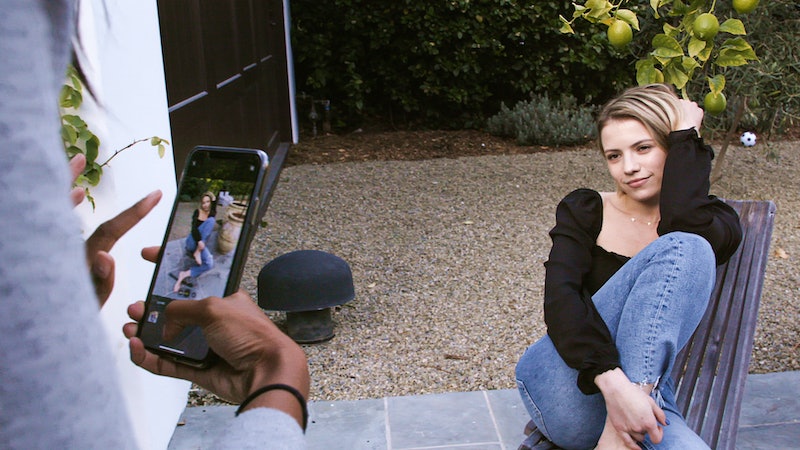 What does it mean that there are millions of people in the world who have millions of followers on platforms like Instagram? Are they all actually famous, or did they have a little help getting there? And if that's the case, does that mean anyone really can become famous?

Journalist Nick Bilton dives into the industry of influencing in his new HBO documentary Fake Famous, where he picked three everyday people with small Instagram followings and worked to make them successful influencers. After using sketchy follower buying schemes and creating expensive photo shoots, the trio of participants took wildly divergent paths as they tried to answer the question of what it means to "make it" online — and if they even really wanted the lifestyle given all it entailed.

But sometimes even the best-laid schemes go even better than expected. One of the fake influencers, Dominique Druckman, saw more success than even Bilton had imagined. Druckman, an actor working a retail job to make ends meet, eventually grew her following of 1,100 Instagram followers to over 200,000 in just a few short months. (Her handle is .) Viewers watched her begin receiving free merchandise from companies, hock products on her Instagram, and even go on a cringe-worthy trip to Las Vegas in a bus of other influencers who couldn't stop staring at their phones.

Druckman's influencer career really took off towards the end of the documentary when she booked an all-expenses paid vacation to a resort — only to have to cancel the trip as the coronavirus pandemic began early last year.

Since the cameras stopped rolling, much of Druckman's life has gone back to how it was prior to the documentary's start. She's still working the same retail job that she was before and continues to film audition tapes in her quest to become an actress. "Despite appearing like an influencer, I was never getting paid for anything, aside from my actual [job]," she tells Bustle. She did, however, land a talent manager to help her take her acting career to the next level.

As far as keeping up appearances though, Druckman is excited to no longer have to keep the secret of how her following exploded so quickly. "It was more friends of friends who, throughout the process of seeing my following grow, would ask my friends, 'What's up with Dominique, what's she doing?'" she laughs. "It was more shady undertones, but now they're just coming out of the wood work. They'll be like, 'Can't wait to watch you!'"

As Druckman reflects on the experiment, she realizes she was hyper-critical of the influencer world as the documentary concluded, but her views have softened since then. "I'm a lot more forgiving of people because we're all going through different things," she explains. "I'm a lot more proud and happy to see the influencers I follow be more real and grounded than these spectacles and photo shoots. [Social media] doesn't feel as artificial as it might have before."

And what advice does she have for people who are considering trying to replicate Bilton's experiment? "Find some good fake bots because you can totally tell!" she jokes. "But at the end of the day, it really comes down to your values and how comfortable you feel with deceiving people."

More like this
The 'Love, Lizzo' Harry Styles Scene Is Just 1 Moment That Made Fans Feel Seen
By Brad Witter
North West Has Mastered The Wednesday Addams & Lady Gaga TikTok Dance
By Jake Viswanath
This 'White Lotus' Symbol Could Hint At A Major Character's Death
By Grace Wehniainen
'The White Lotus' Costume Designer Explains That Accidental 'Princess Diaries' Moment
By Grace Wehniainen
Get Even More From Bustle — Sign Up For The Newsletter