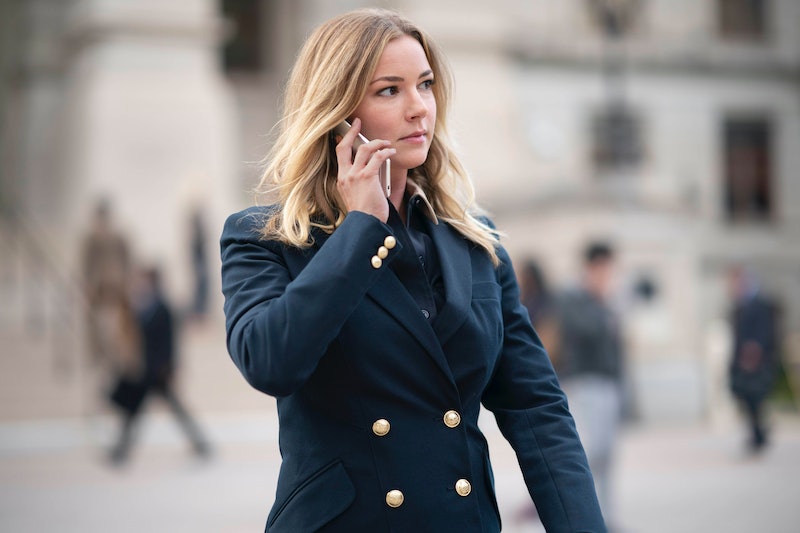 Spoilers ahead for The Falcon and the Winter Soldier Season 1 finale. Sharon Carter may be going full villain. As she explained to Sam and Bucky earlier in The Falcon and the Winter Soldier, she leaned into life as a Madripoor hustler after being abandoned by the Avengers following Captain America: Civil War. The Season 1 finale reveals she wasn’t just dealing stolen art, but super-soldier serum, too. That’s right: Sharon was the Power Broker all along.

Though she ultimately helped Sam and Bucky defeat the Flag-Smashers and was granted a full pardon (and her job back!) in an end credits scene, it doesn’t look like Sharon is back to the trustworthy Agent 13 we met in Captain America: The Winter Soldier just yet. In fact, she seems to be embracing her evil side even more.

Getting Back to Work as the Power Broker

In the end credits scene, an emotional exchange plays out as Sharon is welcomed back to the country with a full pardon. “The Carter name has always been synonymous with service and trust,” the senator tells her. “Today, we begin to set things right.”

Sharon looks genuinely touched as she accepts, only to slip back into Power Broker business as soon as she’s outside. “Start lining up our buyers,” she tells someone on the phone. “Super-soldiers might be off the menu, but we’re about to have full access to government secrets, prototype weapons, you name it. Should be something for everyone.” It’s unclear who she’s talking to, but it could be her friend and driver from Madripoor — the one she told, “we’ve got a big problem” after working with Sam, Bucky, and Zemo.

In addition to dealing illegal art and super-soldier serum in Madripoor (where she assumed the grim role of “judge, jury, and executioner”), Sharon also apparently used Karli and her fellow Flag-Smashers as “muscle” for carrying out her dirty work. Though Karli is now dead, that only means one less person knows Sharon’s secret identity. And now that she has unique access to government intel, she’s even more dangerous.

Unless Sharon is playing a really long con and somehow using her position as Power Broker as a force for good, it appears that she’s officially crossed over to the villains’ side. It’s sad to see but also not totally unexpected. Could the Avengers not even have given her a phone call after Civil War?

Is She On Sam and Bucky’s Side?

The Falcon and the Winter Soldier has explored what makes a “villain” in more depth than maybe any other MCU project: Karli, Zemo, and John Walker are all murderers that receive some sort of redemption by the end of the season. Just because Sharon is currently a villain doesn’t mean she is fully and forever evil. However, some of her actions had particularly dark implications for Sam and Bucky. She hired Batroc to double-cross Karli, yes, but she must have known that him equipping the Flag-Smashers with dangerous weapons would make it easier for one of them to kill Sam. Though she ultimately saved Sam by killing Karli, we don’t know that that was her plan all along.

Ultimately, it seems like Sharon is on Sharon’s side — and might try to help her old friends only if it’s convenient for her endgame. Because Sharon is definitely not the Power Broker in the comics, her next steps are anyone’s guess.