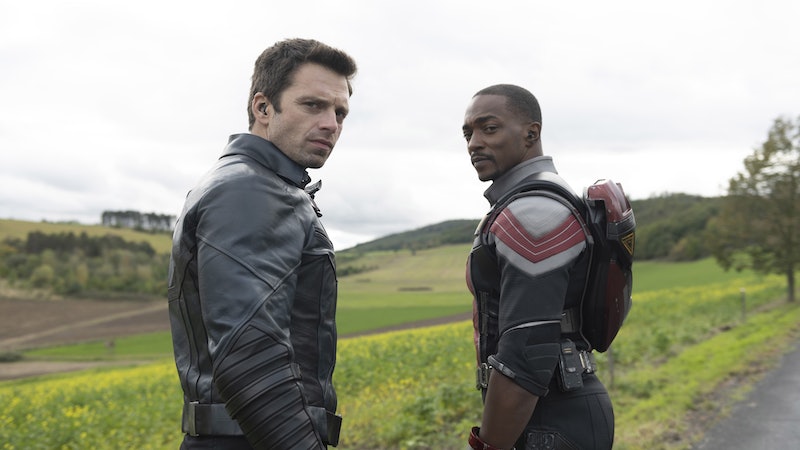 Spoilers ahead for The Falcon and the Winter Soldier Episode 3. Who’s truly the villain on The Falcon and the Winter Soldier? Three episodes in, there’s still plenty of room for speculation — especially now that we seem closer than ever to meeting the mysterious figure known as the Power Broker. The name was initially introduced in Episode 2, with Karli and her Flag-Smasher friends hurrying to evade the “Power Broker’s men.” Now, we have a closer understanding thanks to Wilfred Nagel, the scientist who developed the modern super-soldier serum with support from the Power Broker (Nagel was promptly killed, though, seemingly scrapping any chances of more super-soldier serum being developed soon).

But somehow, even in an episode plainly titled “Power Broker,” we still haven’t seen the powerful villain. Or have we? Here are several prevailing theories about the villain’s true identity.

It was exciting to see Sharon Carter reunite with Sam and Bucky for the first time since Captain America: Civil War. It was sad, too, because Sharon’s been hiding out in Madripoor since helping Steve and Sam escape during their very illegal quest to protect Bucky. Here, she is at least living well as a very connected art dealer. As she tells Sam, “at some point I thought if I had to hustle I might as well enjoy the life of a real hustler.” She agrees to help the group find Nagel (whom she recognizes instantly as an associate of the Power Broker) and very quickly does just that... almost too quickly, perhaps. Several theories suggest Sharon could be the Power Broker — though as The Wrap explains, that doesn’t necessarily mean she has turned evil. She could be trying to oversee the super-soldier serum from the inside. Or sadly, maybe she’s just feeling hurt after being effectively abandoned by the Avengers (valid) and, like art dealing, turned to the Power Broker identity as a way to live her hustler lifestyle to the fullest. At one point after the group’s meeting with Nagel, she tells her driver, “We’ve got a big problem. Actually a couple of them,” suggesting that she’s keeping some secrets either way.

This episode also saw the return of Zemo, who infamously plotted to break the Avengers apart during Civil War. He personally hates the Avengers and the very concept of superheroes, so he doesn’t seem like someone who would love to unleash a destructive force of super-soldiers on the world. But despite being in prison, he’s still very well-connected to his family’s fortune — so if he were interested in manipulating the Power Broker role in some mysterious way (Zemo’s plans are often perplexing until their true purpose is revealed), he would certainly be able to do that.

From the time he was first introduced in The Incredible Hulk, Thunderbolt Ross has been tied to super-soldier business — and in Civil War, his intentions were made even clearer: He’s all about power and control. If superheroes and super-soldier serums exist, he wants to be in charge of their extreme potential for destruction. As Inverse reports, these qualities make Ross a worthy foe for the Flag-Smashers (who are likely going to be in big trouble with the Power Broker soon, since they stole the last of the serums and Nagel, dead, can’t make any more).

Curtiss Jackson isn’t a character in the MCU (yet), but he’s the man behind the Power Broker in the comics. According to Marvel, he is a businessman who paid a scientist, Karl Malus, to develop an experimental strength augmentation process. John Walker went on to use this process before becoming Captain America in the comics. While this would be the most straightforward explanation for who Power Broker is in the show, it seems unlikely that all this buildup has been for someone who wouldn’t shock or thrill viewers in the way that a familiar face would.

Walker might as well be a villain already, purely for the way he’s so abruptly taken up the Captain America mantle (that wasn’t his for the taking). But could he be playing a larger role behind the scenes? Walker did use the Power Broker’s strength-boosting services to become a powerful hero in the comics, so there’s a close connection between the two. If he’s not savvy enough to operate as Power Broker himself, he could be working for the villain.

While this theory is pretty out there, it does occasionally seem like there’s something more sinister to Walker than just being, well, a poor replacement for Steve Rogers. For example, in the latest episode, his angry “do you know who I am?” to one of the Flag-Smashers’ associates could easily be seen as a nod to the viewers, too. Do we know who John Walker is, as far as the MCU goes? Maybe not completely.