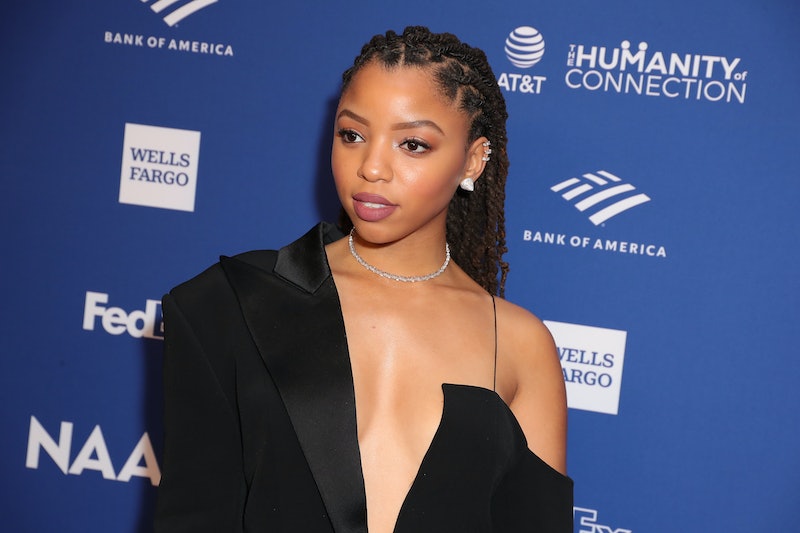 On Jan. 26, the sisters of the Grammy-nominated R&B duo Chloe x Halle announced that they were launching separate Instagram accounts to share their individual personalities with fans. With Halle Bailey reportedly filming Disney's upcoming remake of The Little Mermaid, the sisters are apart, and Chloe has been having a blast posting studio footage, fire thirst traps, and videos of her taking part in (and arguably winning) the viral Silhouette and Buss It challenges. But despite her vibes being at an all-time high, Chloe's received a ton of backlash for her confident posts. In 2021 and on Beyoncé's internet, no less. After hosting a tearful IG live in response to the hate, fans and celebrities alike have come to her defense online.

On Saturday, dressed comfortably in her underwear and a T-shirt featuring her mentor, Queen Bey, Chloe posted a video of her lighting a candle and burning sage in her bedroom. She captioned it "good vibes only." Though most of the comments, including praise from her sister Halle and singer Tamar Braxton, were kind, not everyone shared in Chloe's good energy. Many called her "too sexy" and even body-shamed her. During an Instagram live the next day, the singer/actor/producer addressed the backlash and promoted positivity.

"I think for every woman out there, don’t change who you are to make society feel comfortable. I’m telling myself that’s not what I’m going to do, and even when I posted the video yesterday I was posting it because I was sage-ing and doing palo santo," she detailed. "I was like, 'Let’s spread positive vibes.' I didn’t even really notice you all would talk about my ass because I’m like, 'Okay, I’m just walking in for one or two seconds.'"

Chloe also explained that she wanted to speak on the hate because self-love has been a longtime journey for her. "It’s really hard for me to think of myself as a sexual being, or an attractive being quite frankly," she said. "So when I see all the uproar about my post and stuff, I’m a bit confused. I really don’t understand 'cause I’ve never seen myself in that way or in that light."

She continued, "Now I really love who I am, and I don’t post what I post for validation from anybody or even male attention. It’s just me, and a lot of people who know, who are on my private Instagram, see that’s how I find my confidence because it has taken a lot for me to appreciate myself and my body."

Almost immediately following the Instagram live, fans and celebrities alike flocked to social media to support Chloe against the backlash. Actress Gabrielle Union took to Twitter, sharing a quote from novelist Alice Walker and adding, "Please continue to fly. Soaring while under attack is hard asf but you are not alone. Never alone. We gotchu. Keep shining!"

Director Ava DuVernay recalled working with Chloe x Halle on a song for her 2018 film A Wrinkle In Time for an inspirational message posted to her Twitter account: "When you wrote WARRIOR for 'Wrinkle In Time,' you sang: 'Yes, I am a warrior. There's no need to worry, love. Look around it's glorious. Close your eyes and taste the sun. You know where to find me.' Stay in the sun, Lil Sis. You got this."

Halle Berry expressed her support in a short and sweet tweet, writing, "Sending lots of love to Chloe. Keep doing you."

Rapper Wale shared a story of an encounter he had with the musician. "Aye I met Chloe Bailey at the locs salon," he wrote on Twitter. "She one of the most humble people I've ever come across. Folks be mad for nothin' man."

Check out other supportive posts from celebrities and fans below.