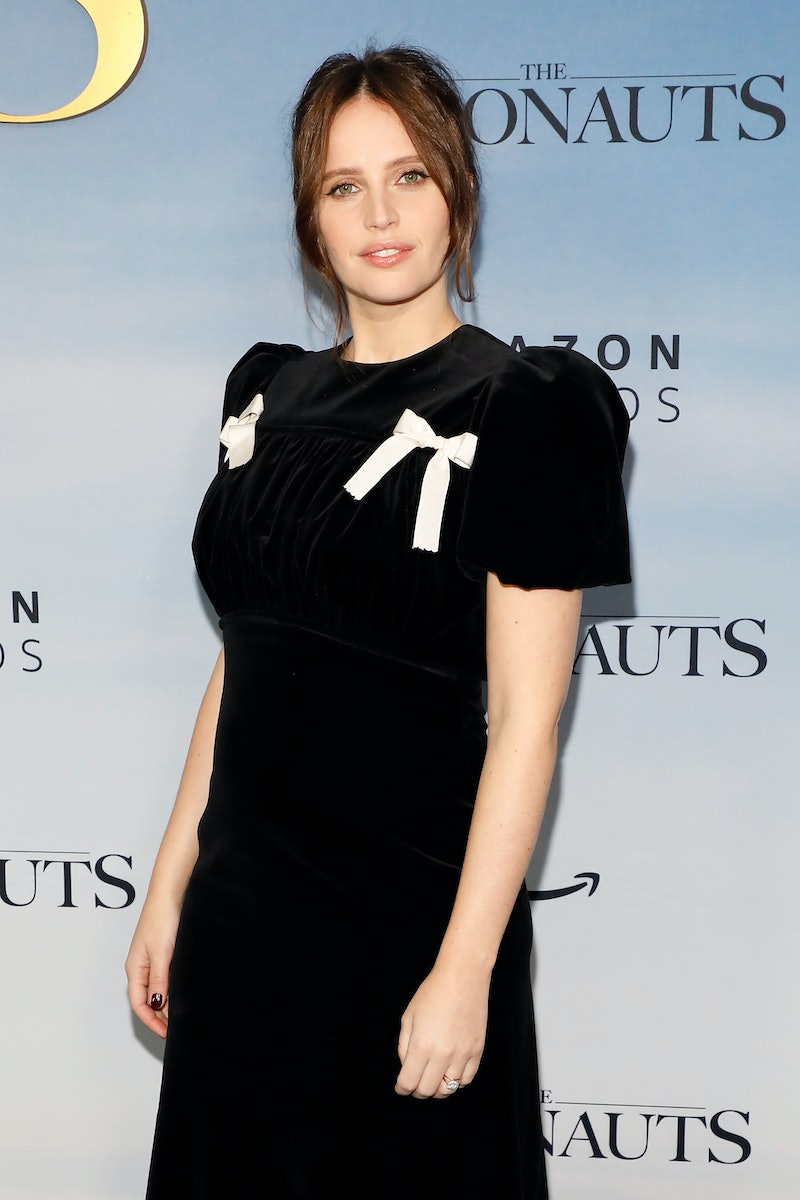 This Oscar nominee has just landed a big role: mother. Nine months after she was first spotted with a baby bump on the red carpet, E! News reported that Felicity Jones has welcomed her first child with her husband, director Charles Guard. While the incredibly private actor has not publicly commented on or confirmed the news, the Daily Mail reported that Jones was spotted pushing a stroller during a walk in London on Friday, September 11. Bustle has reached out to Jones' reps for comment on her reported baby news, but did not hear back at the time of publication.

In December 2019, E! News confirmed that Jones and Guard were expecting their first child together, shortly after pregnancy rumors began swirling thanks to the black, A-line gown that Jones wore to The Aeronauts premiere. The couple have kept their romance out of the spotlight in the years since they first began dating in 2015.

According to Vogue, Guard — who directed the horror movie, The Uninvited — popped the question two years later. In 2018, The Sun reported that Jones and Guard had tied the knot in a secret wedding ceremony at Sudeley Castle in the Cotswolds, Oxfordshire in England. The outlet reported that Jones' friends and costars, Eddie Redmayne and Tom Hanks, were in attendance, and the guests celebrated outdoors on the grounds of the castle.

Though they have attended quite a few events together over the years, Jones has never publicly spoken about Guard or their relationship to the press, though she has talked more generally about her views on relationships. "I am definitely romantic and I love romantic stories — that’s why I keep making romantic movies," Jones told The Telegraph back in 2014. "It’s funny how seeing a love story never gets boring because it’s the dream isn’t it? It’s the dream to have a true connection with another human being."

In October 2016, Jones opened up about having children and the impact that becoming a mother might have on her career during an interview with Harper's Bazaar. "Fortunately, I feel like we're in a new era, where it is empowering rather than limiting to have children," the actor explained at the time. "From what I can see from friends and relatives, women get stronger and more decisive from having children, they don't waste their time doing things they don't want to."

Jones also explained that she wanted to use her career to showcase strong, female characters onscreen in order to inspire women everywhere. "There's an appetite for both men and women to be interesting, complicated characters. We don't want to see stereotypes on screen," she said. "It's such an exciting time getting to play these incredible women who are leading the stories. They have their own ideas and they take their own decisions. I have had really strong female role models my whole life. I was instilled from a young age with a sense of independence and making my own way in the world, not relying on a man financially."

Around that time, Jones did offer up some rare comments about her husband, telling E! News that Guard "[couldn't] wait," to see her star in Rogue One. "He loves it," she said at the time. My family is coming out as well. I can't wait to see what they all think of it."