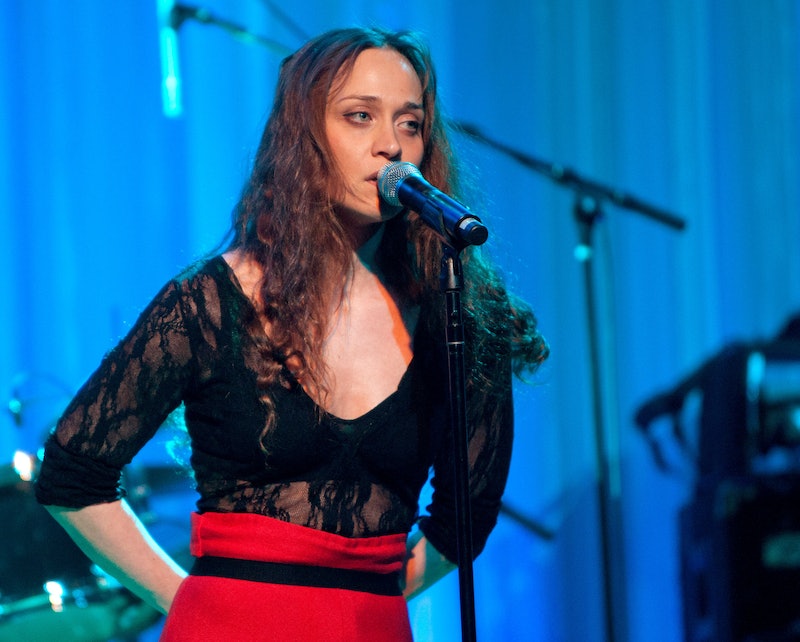 Is a Spring Fling moment in the Grammys' future? Fiona Apple spoke out against Dr. Luke's Grammy nomination during a recent interview with The Guardian, describing how his 2021 nod took away from her excitement about the three she earned. She even opened up about the ways she's envisioned making a statement, including a protest idea that could have come straight from the 2004 comedy Mean Girls — in the best possible way.

Dr. Luke — whose real name is Lukasz Gottwald — is up for Record of the Year for his work on Doja Cat's "Say So," under the pseudonym Tyson Trax. Apple expressed disbelief that the Recording Academy would nominate him for one of the night's biggest awards, considering his ongoing legal battle with Kesha. (The singer has accused him of abuse and sexual misconduct, and he denies all allegations.) In her criticism, Apple recalled Kesha's emotional performance at the 2018 awards ceremony, where she sang about her experiences with Dr. Luke, seemingly with the Academy's support. (Bustle has reached out to the Recording Academy for comment.)

"I'm bringing up the Grammys and that's really something that I shouldn't be doing, but really, Dr. Luke is nominated?" Apple told The Guardian. "They had [Kesha] up there singing 'Praying' and now they're gonna go: 'Oh but it's Tyson Trax!'"

Apple — who has been open about her own experiences of sexual assault — initially was ready to celebrate her nominations, especially after seeing all female nominees in the Best Rock Performance category. However, learning of Dr. Luke's put a damper on her own achievements and that of the women nominated alongside her, she explained. "I felt really nice for a second," the Fetch the Bolt Cutters singer said. "[But then] I felt like this is exactly what they want me to do: 'It's better now! I got nominated! And it's all women this year and the Grammys are great!'"

"I keep going back to them putting Kesha on stage like, 'We believe you' — and I believe her — then two years later, f*cking Tyson Trax," she added. "Not to go back to that word, but it's bullsh*t."

The singer and songwriter then shared that she has been imagining what she would do if she were to win a Grammy award show night. "My vision was that I would just get up there with a sledgehammer and I wouldn't say anything, I would take the Grammy and smash it into enough pieces to share and I would invite all the ladies up," she revealed, creating a visual reminiscent of Cady Heron's big Spring Fling speech in Mean Girls. "My second thought was I wonder if I can get all these ladies to boycott this sh*t because of Dr. Luke."

Apple has been a vocal supporter of Kesha following the singer's original lawsuit against Dr. Luke in 2014, when she accused the producer of assaulting her sexually, verbally, and physically. She dropped the suit in 2016, but Dr. Luke's countersued, denying all claims of assault and accusing Kesha of defaming him to be released from her record contract. Around that time, comedian Margaret Cho posted a photo of Apple holding up a "Free Kesha" sign on Instagram so that she could publicly support the singer. "Kesha — I am so angry for you," Apple's sign read. "They were wrong. I'm so sorry."

In February 2020, a judge ruled that Kesha defamed Dr. Luke in a text message to Lady Gaga, and ordered her to pay the producer $374,000 in interest to his company for breach of contract. "Judge Schecter issued rulings today on motions for summary judgment in the Dr. Luke litigation," Kesha's legal team said in a statement to Pitchfork following the ruling. "We disagree with the Court's rulings. We plan to immediately appeal." The case is set to go to trial.

As for the Grammys, the awards show will take place on Sunday, Jan. 31, and we may or may not get to see a trophy smashed and shared.

More like this
How Ghosts Inspired Kesha’s New Music
By Jake Viswanath
Kesha Is Down To Be The Next Bachelorette
By Jake Viswanath
Everything To Know About Taylor Swift’s 10th Studio Album, 'Midnights'
By Grace Wehniainen and Jake Viswanath
Dan Levy Appears In The Latest Teaser For The Weeknd's HBO Series, 'The Idol'
By Jake Viswanath
Get Even More From Bustle — Sign Up For The Newsletter