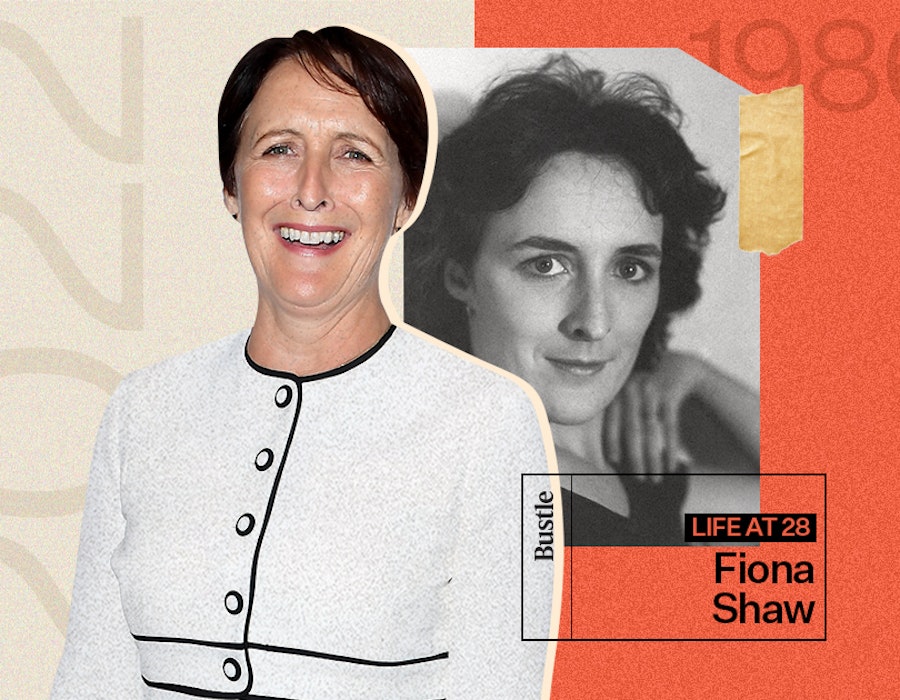 “I was being offered everything,” recounts Fiona Shaw of her high-flying theatre career at the age of 28. In demand at the Royal Shakespeare Company (RSC), she was nominated for an Olivier Award for her supporting roles in As You Like It and Mephisto. (Four years later, she’d win the Best Actress Award.) “I was fulfilled in that regard, but I wasn’t thinking outside the blinkered world of my profession.”

Shaw is, of course, now known for her film and TV roles. In 2001, she played the wizarding world’s very own Iron Lady, Aunt Petunia, in Harry Potter and the Philosopher’s Stone. More recently, Shaw has been heralded for her portrayal of the commanding Carolyn Martens in BBC America’s Killing Eve.

Amid experiencing major career highs at 28, Shaw was also dealing with residual feelings from a family tragedy. “My brother was killed in a car accident when I was 26, and I really think it hit me at 28,” she tells me. “Suddenly, you understand, we’re not going to be here forever. You feel as though you must decide what you want. You ask yourself, ‘When am I going to have children?’ and ‘Why are all my love affairs catastrophic?’ I found turning 30 very, very hard.”

As a way of dealing with the existential crisis that often accompanies the pivotal years between 27 and 30, Shaw developed a ritual with a close friend. “We would drive down to Blackfriars Bridge in London, late at night, and throw flowers in the water,” she says. “We’d sit on the bank and drink, and talk of how disastrous our lives were, even though we were doing incredibly well.”

Married to author and scholar Sonali Deraniyagala since 2018, Shaw now splits her time between London and New York, a far cry from her upbringing in County Cork, Ireland. But at 28, Shaw was in a relationship with a man. Being “out” wasn’t a possibility that had dawned on her. Although she eventually decided against having children, the topic was once something that plagued her thoughts. Below, the actor talks about navigating her late 20s, career burnout, her sense of sexuality and how it related to her Catholic upbringing, and the stellar advice she’d give to her younger self.

I lived in a flat in Brixton, South London, and I would cycle or drive up to the Barbican theatre. I lived with a guy and a girl, and we were a great gang. We had piles of parties. It was very much an open house. Sometimes too open! You’d go down to your bedroom, and there’d be somebody in the bed. It was wild.

Your Killing Eve counterpart Carolyn is incredibly self-assured. Did you have a strong sense of self at 28?

I had a great sense of self. I wasn’t a wreck or anything like that. I remember having very good values. I had residual innocence from my upbringing in Ireland. We were very much behind the “trendy” people of London. When I went to RADA, aged 21, I was wearing tweed skirts, and they were all punks. I hadn’t had a huge amount of life experience, that was the difference.

You mentioned being “offered everything” in terms of acting work when you were 28. Did that result in you having a sense of career fulfillment?

On the surface it was great. At one point, I was rehearsing for three plays, including The Taming of the Shrew, and I had been offered roles in the films My Left Foot and Mountains of the Moon. There was also a weird mix-up where I was double-booked for the theatre and a TV show. The theatre won, actually. My fate might have been quite different if TV had won.

All of that took its toll on me. I was thinking: “Am I really doing what I really want?” I wasn’t sure I was enjoying it, but it [the work] had been the thing I’d chosen. It was really full-on, and I was lost. I felt very unresolved.

The real truth is, if you say “yes” to every work thing, but you never say “yes” to your mother’s invitation to go home, or a holiday with a friend, you begin to lose your centre. You do better if you do the things you like doing. But nothing in our culture tells us this. My father said “work hard, work hard.” And I was, but, actually, I should have worked less hard, and had more sense of self knowing there will be another job. And even if there isn’t, there’s always another life.

Did you consider yourself to be emotionally fulfilled?

No. But emotional fulfillment comes and goes. I was emotionally fulfilled at 19, I’m not sure that I was later [laughs]. Fulfillment implies arriving at an end, but that takes a long time.

What was your view on love and relationships?

I was panicking, thinking “I must get married and have children.” That panic lingered well into my thirties. I had a vague sense about sexuality. I was worried if I could be a parent. And if I were to become a parent, should I take my children back to Ireland to be brought up? I was discussing it with my boyfriend at the time. “Should we have a baby?” All that talk went on.

I never had the confidence to think, “I could do that on my own.” And I’m not sure that I could have — morally, parents-wise or religiously. You’re under a cloud of disapproval [with Catholicism]. Those things were much bigger in my mind then.

You’ve previously spoken about experiencing “self-hatred” upon realising you were gay. Was that something you were grappling with at 28?

I don’t think it was self-hatred, actually. It was confusion, along with a vague feeling that it [coming out] would probably interfere with my career. Torment is inner, isn’t it?

The real truth is, if you say “yes” to every work thing, but you never say “yes” to your mother’s invitation to go home, or a holiday with a friend, you begin to lose your centre.

If your 28-year-old self were to meet you now, what would she think of you?

She’d be very surprised, I think, and pleased. Part of the problem with being 28 is that you can’t even see where you’re going to be living at 40, let alone at 60. At 28, I probably had a feeling that I’d go back to Ireland.

When I was 30, I was asked to move to Hollywood. I had done a film called Three Men And A Little Lady, and there was a lot of interest in me over there. But I felt I’d already made my jump at that point, having moved from Ireland to London. I really didn’t think I would go anywhere else. In fact, now I partially live in New York, and that’s hugely enjoyable. My younger self would be surprised at that.

A double booking between theatre and TV resulted in you staying in the theatre world instead of branching out to the small screen at 28. Did you have aspirations of being on TV?

It didn’t have the artistry it has now. In a way, television has become theatre; you get to know the characters. Sometimes on Killing Eve, I might only have two scenes in an episode, but because the story unfolds over weeks, you get to play all these different aspects, as you would on stage. You get a much bigger arc of the human potential, which is fundamentally what actors want to play. You want to play the contradiction.

I was never aspiring to be in EastEnders. Nothing against EastEnders, it’s an important part of the culture, but there were very few things on TV back then that had an explosive value. I was right to stay in the theatre.

Did you have a mentor you could rely on for advice?

Yes, Jenny Mackintosh from the RSC. I’d often go and sit in her kitchen and cry, “What shall I do about this?”

You need mentors throughout your life. I’m very aware that I’m available to advise people in my world, young directors and such. I wouldn’t let someone panic about a choice now, because I know you don’t need to panic, and it’s reassuring if someone more senior can tell you that.

In 1986, what social issues were you passionate about?

We were feminists. We [my acting peers and I] were trying to find the inversions of Shakespeare's language. Were there things we were missing because we were women? There was lots of investigation and endless discussion. We were aspiring and philosophical. It wasn’t a matter of careerism. We felt very committed, politically, to what we were doing.

When I first went to the RSC, there were no women directors there. We invited all the female directors in England to come and visit on a particular day. We created a thing called “The Women’s Group.” There was a feeling that women couldn’t direct. Slowly, people began to realise that they could. It’s often been said that the theatre, in all its artistry and liberalism, misses the point sometimes. It was missing the point then.

Shortly after the minor’s strike [‘84-’86], all sorts of inequalities were being discussed. Probably too much in the context of white Britain in relation to the world.

I listened to Bob Marley throughout the ‘80s. I lived in Brixton, and it was really pouring out of the houses in my neighbourhood. I was also listening to Blondie and Peter Gabriel. And that song… *Sings* Desperado, why don't you come to your senses?’ [Editor’s note: I later discover that this is a lyric from The Eagles’ 1973 hit “Desperado.”]

If you could go back in time and visit your 28-year-old self, what advice would you give her?

I’d tell her to relax. I couldn’t relax. I was once eagerly doing tai chi at RADA, and a woman said to me, “Fiona, stop.” I said, “Stop what?” And she replied, “Everything.” This became a big joke among my friends. I couldn’t stop. I was hyper, really. Definitely a workaholic — but not in a horrible, evil way. I was tormented, but also very excited by life.

It all lays out before you, you know. Not without effort, of course, but I was panicking all the time. If only you could lie on the bed at 28 and think: “It doesn’t matter if I haven’t had three children by the time I’m 30.” There’s so much in the world to enjoy, so please enjoy it. I would love to go back to my former self, rub my head, and say, “It’s going to be fine.”

More like this
At 28, Lesley Manville Was Acting, Picketing, & Singing Kate Bush Songs
By Olivia-Anne Cleary
'It’s A Sin's Real-Life Jill Has An Important Message About Monkeypox
By Sam Ramsden
Talking About Mental Health In Sport Is Crucial, Says England Legend Karen Carney
By Sam Ramsden
'Heartstopper's Yasmin Finney Wants To Be The First Trans Bond Girl
By Sam Ramsden
Get The Very Best Of Bustle/UK