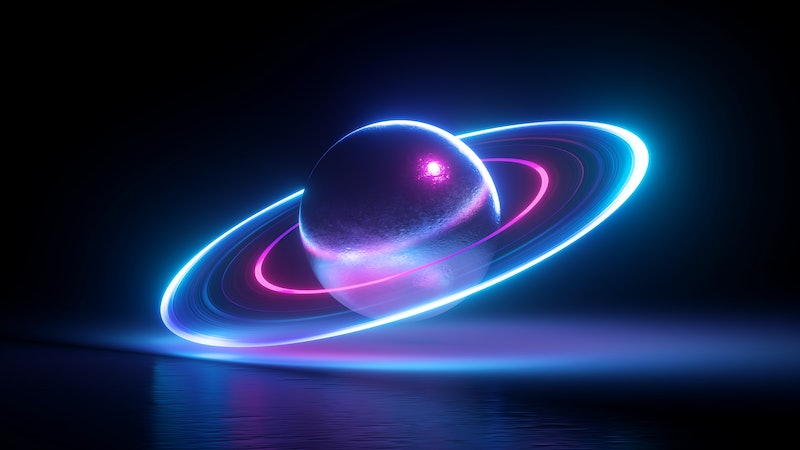 You’ve probably heard whispers (or screams) about Saturn return periods in astrology, aka the coming-of-age planetary transit that peaks during everyone’s late twenties and shakes up the foundations of their lives. Or perhaps you’ve already experienced one and lived to tell the tale. Saturn is the planet that rules over the passage of time, so for some people, it feels like these rocky and change-filled periods can last an eternity. But exactly how long is a Saturn return?

Well, first it’s important to look at Saturn’s planetary cycles in general. It takes about 29.5 years for Saturn to traverse the entire wheel of the zodiac — which means that’s how long it takes before it returns to the exact placement it was at when you were born. That also explains why our first Saturn return always return hitting when we’re approaching age 30. The same thing will occur the next time Saturn completes a cycle through the zodiac nearly 30 years later, meaning we’ll have multiple Saturn returns throughout our lives.

“The first Saturn return lasts between the ages of 27 to 29.5 years old, and the second one occurs at the ages of 58 to 61,” astrologer Lisa Stardust, author of Saturn Return Survival Guide: Navigating This Cosmic Rite Of Passage, tells Bustle. “And then you’ll have another one roughly 27 years later.” These sobering transits can feel like crisis points throughout our lives, but ultimately they help us to grow, find wisdom in ourselves, and become more independent.

During our Saturn returns, we’re asked to take ownership of our responsibilities, get real about what we’re working toward, clarify our commitments, and step into a more mature stage of our adulthood. The peak of your Saturn return will take place when Saturn is within just a few degrees in the zodiac of its placement in your astrological birth chart, which can last anywhere from a few months to nearly a year. If you don’t know the exact placement of your Saturn zodiac sign, try looking it up in an astrology chart app, having an astrologer read your birth chart, or using an online Saturn return calculator to find out your peak Saturn return dates.

While the actual peak of a Saturn return may only last for a period of months, many astrologers believe that the effects of a Saturn return will be felt during the full two and a half years that Saturn spends in your natal Saturn sign. For example, right now Saturn is in Aquarius from December 2020 until March 2023. That means that millennials born between approximately 1991 through 1994 (the last time Saturn was in Aquarius) will experience their Saturn return during this period. While the peak months of each of their Saturn returns will differ depending on their birthdate, it’s believed that they’ll all feel the shake-ups, reckonings, and life changes of this transit during the entire two and a half years that Saturn is journeying through Aquarius.

When people start making huge life shifts in their late twenties (such as getting married, buying a house, or changing careers), you can usually chalk that up to their Saturn return being in full force — although it’ll manifest differently for everyone. “The effects of your Saturn return can last up for two years after the actual return commences,” Stardust says. “But you’ll see the results of it manifest in your life forever.” Some people will start feeling the Saturnian quakes take place as soon as their 27th birthday hits, while others may not feel it as intensely until they’re closer to 30. Either way, expect for your Saturn return to prompt your growth into a stronger and more independent version of yourself.