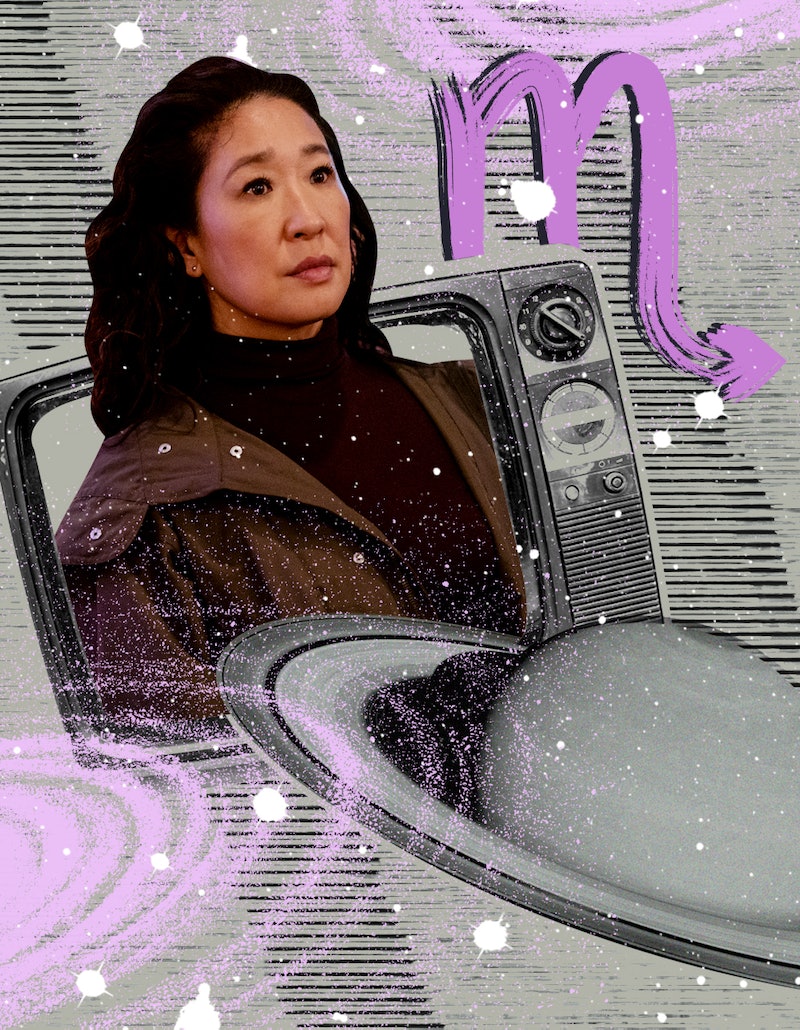 In Astrologically Speaking, astrologers make their case for your favorite character's zodiac sign, based on specific scenes, quotes, and even fashion choices. Here, astrologer Alexandria Lettman explains why Eve Polastri of Killing Eve must be a Scorpio. Spoilers for Killing Eve follow.

In case you hadn’t saved the date, Season 4 of Killing Eve arrived on the small screen on Feb. 27. It’s the final installment of the complicated relationship between a beautifully unbalanced international assassin, Villanelle, and Eve Polastri, the MI6 agent who’s infatuated with her. At the end of Season 3, Eve, played by Sandra Oh, and Villanelle, played by Jodie Comer, seemed ready to accept their feelings for each other.

If you’re confused about why, exactly, Eve flirts incessantly with danger in pursuit of Villanelle, the answer could be found in her zodiac sign. To me, it’s clear Eve is a determined Scorpio sun, who’s tantalized by the dark and mysterious mind of a female serial killer. Plus, she’s passionate about her work, thanks to Mars, Scorpio’s traditional planetary ruler, and is governed by her instinctual desires, as befits a Scorpio’s water sign energy.

If you need more convincing, here are my top three reasons why Eve is a textbook Scorpio.

She Has An Inner Darkness

In modern astrology, Scorpios are ruled by Pluto, the planet of intensity, psychological turmoil, and upheaval. This makes the Scorpion attracted to all things dark and stormy, which Eve demonstrates repeatedly throughout the show. When the show premiered in 2018, Eve was introduced as a whip-smart criminal investigator who was desensitized to violence. Case in point: After being presented with crime scene photos in the pilot episode, she simply mutters “cool.”

As her chase with Villanelle ensues, Eve’s shadow self become harder to ignore. In Season 2, Episode 5, “Smell Ya Later,” Eve contemplates pushing a man in front of an oncoming train as retaliation for bumping her on the platform. (As the train arrives, her impulse subsides, and she appears visibly shocked at her own capability.) Another revealing example comes in Season 3, Episode 8, “You’re Mine.” Villanelle asks Eve, “Do you think I’m a monster?” She replies, “I think we all have monsters inside of us.”

This is a classic Scorpio energy. The sign is the eighth of the zodiac and rules the corresponding eighth house of sex, death, and rebirth. They are fascinated by the humans’ hidden and taboo desires — especially their own.

She Is Consumed By Her Passion For Villanelle

Persistence and drive are deeply rooted in Scorpio’s nature, thanks to their traditional planetary ruler, Mars, the celestial body that rules sex, passion, and ambition. For Eve, what starts as a work assignment — catch Villanelle and take down the the organization she works for, The Twelve — ultimately consumes her. In Season 1, Episode 7, "I Don’t Want To Be Free," Eve’s boss, Carolyn, claims she’s “not interested in how Villanelle came to be a killer” because knowing why doesn’t help them to capture her. Eve responds, “Well, I am.” Skimming the surface is never enough to satisfy a Scorpio.

Love for a Scorpio can be all-consuming as well, to the point of being dangerous. Despite her previously stated desire to kill Villanelle — after she murdered Eve’s colleague Bill in a Berlin club — Eve regrets stabbing her in the Season 1 finale. She rushes to administer first aid, giving Villanelle a chance to escape her Paris apartment, and leaving Eve to face the music that she allowed developing romantic interests to interfere with her job.

She Lets Her Emotions Cloud Her Judgment

Scorpios often come across as an unlikely water sign because they’re well-versed in hiding their vulnerabilities, unlike more outwardly sensitive signs Pisces and Cancer. Being a fixed sign gives Scorpios an outer shell that can mask their watery depths and emotions. Finding a balance between strength and softness isn’t always easy for a Scorpio — especially when they fall for someone.

You can see this in Season 1, Episode 5, "I Have A Thing About Bathrooms," when Eve has her first standoff with Villanelle. Rather than driving her colleagues to safety, Eve ignores their pleas and and risks all of their lives to approach Villanelle in the English countryside. This move, which could be interpreted as a sign of her trust in Villanelle, is irrefutably dangerous, and driven more by emotion than by logic. Scorpios are great at being level-headed when they aren’t emotionally invested in a situation (or person), but once feelings are involved, there’s no stopping them.

As Eve is consumed by infatuation for Villanelle, her dark side emerges, as does her disregard for danger. There’s nothing more Scorpio than that.