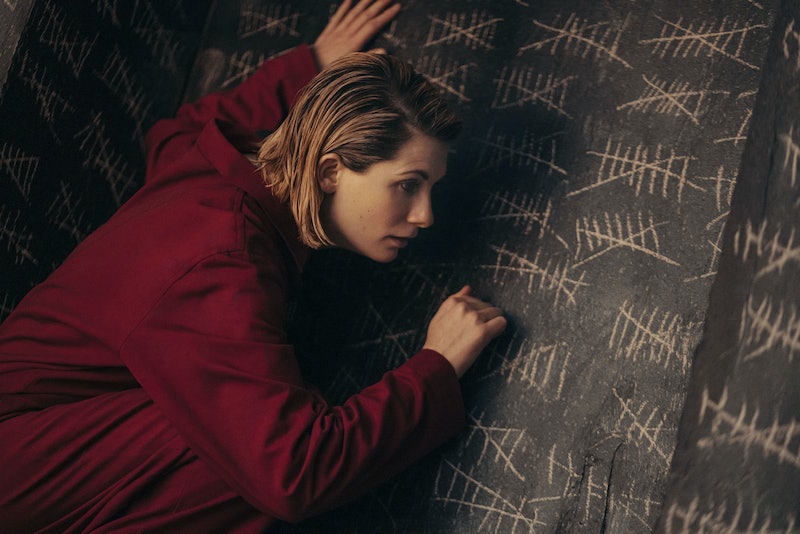 Doctor Who fans last saw The Doctor trapped in a high-security alien prison with no means to escape. What a cliffhanger. Picking up from season 12, Jodie Whittaker returns for the upcoming Doctor Who festive special, Revolution of the Daleks. As the name suggests, the BBC One episode will see the return of Doctor's "biggest and most feared enemies."

First look photos see The Doctor in her prison cell, marking down how long she's been in captivity. And, from the looks of the markings, it's been some time.

Back on earth, her best friends Yaz (Mandip Gill), Ryan (Tosin Cole), and Graham (Bradley Walsh) have no clue where she is and try to resume their lives without her. Of course, this is not a simple feat.

According to official Doctor Who news, the gang "discover a disturbing plan forming" involving a Dalek. The one-off episode will ask "how can you fight a Dalek, without The Doctor?" (not too long, we assume). The Doctor Who cast recently teased to the new episode during a digital New York Comic-Con event.

Via video chat, Whittaker said: "Without giving any spoilers, where we leave the Doctor in the final episode of season 12 … this explores in a way what happens when the Doctor is away from the gang, and from the Doctor’s point of view has no idea about what’s going on on Earth."

Revolution of the Daleks was filmed ahead of the lockdown in March and it's not yet confirmed whether the special will be shown on Christmas Day or New Year's Day but, let's face it, we'll be tuned in regardless.

Per Digital Spy, the BBC has resumed filming its thirteenth Doctor Who series after the pandemic put a halt on production. Thankfully they confirm "the next batch of episodes will still go into production this year." There's hope the new series thirteen could air in 2021 as originally planned.