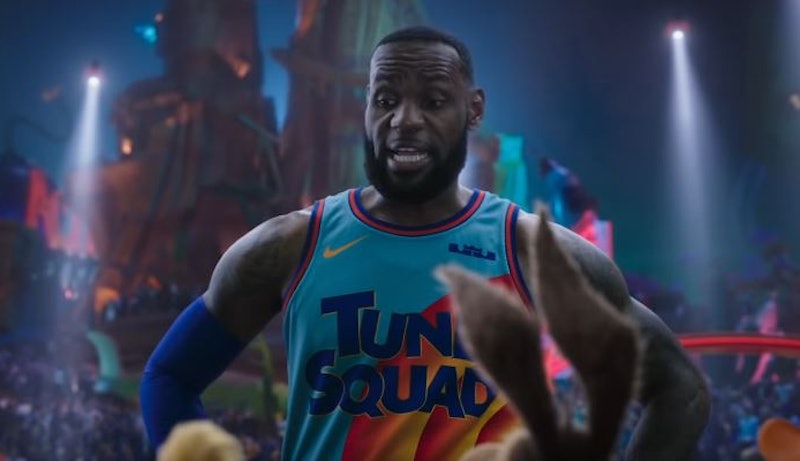 At long last, the first trailer for Space Jam: A New Legacy is here. Starring four-time NBA MVP LeBron James, the film is the much-anticipated sequel to 1996’s Space Jam, which centers on basketball legend Michael Jordan as he teams up with the Looney Toons to take on a formidable basketball squad made up of aliens. Now, James and the cartoon characters have an ultra-high stakes challenge of their own ahead of them, and fans have conflicting thoughts on the subject.

The Space Jam 2 trailer shows James trying to get his son Dom (played by Cedric Joe) excited about basketball camp, but after an argument, they end up trapped in a wild digital space. (It’s full of nods to other properties under the WarnerMedia umbrella, from Game of Thrones to The Flintstones.) There, their captor, AI-G Rhythm, an evil computer algorithm played by Don Cheadle, separates them, and in order to find his son and get them home safely, James has to get a team of Looney Toons characters to beat digitized champions. Of course, his teammates don’t look so good at first — the trailer shows Yosemite Sam shooting a basketball all too literally and Daffy Duck’s jaw hitting the floor when he sees their opponents.

So far, it seems like many fans are hyped for the games to begin, but others have serious reservations. Space Jam: A New Legacy began trending on Twitter as they weighed in on the Malcolm D. Lee-directed film. Among them, numerous fans had glowing reviews of the early look, even if they hadn’t expected to like it.

For many of these fans, their excitement was nostalgia-fueled. Because they adored the original, some are looking forward to seeing it themselves and others want to share it with their kids. One of the latter group wrote that she was “offended” to discover that her daughter didn’t even know who Bugs Bunny is.

Others weren’t so pleased to see the trailer. They shared a bevy of concerns about the Space Jam sequel, with some arguing that no follow-up film was ever needed.

The final verdict on the film will have to wait until it premieres in theaters and on HBO Max on July 16, but in the meantime, it’s worth appreciating what a long road it has been for Space Jam 2 to make it to this point. Rumors of James’ involvement in the sequel date all the way back to July 2015, and the news later became official in September 2018.

Here in 2021, James shared the trailer in an April 3 Instagram post, including one of his quotes from the movie in the caption: “What in the matrix hell did I get myself into?!?!” he wrote.

More like this
The 'Scream 6' Trailer Shows Off Hayden Panettiere's Return & Ghostface In NYC
By Jack Irvin and Jake Viswanath
Anne Hathaway Shared A "Thrilling" 'Princess Diaries 3' Update
By Darshita Goyal
Bill & Frank’s 'The Last Of Us' Episode Has Twitter Emotionally Wrecked
By Alyssa Lapid
Rupert Grint Just Shared A *Major* Update About Ron Weasley’s Future
By El Hunt
Get Even More From Bustle — Sign Up For The Newsletter
From hair trends to relationship advice, our daily newsletter has everything you need to sound like a person who’s on TikTok, even if you aren’t.