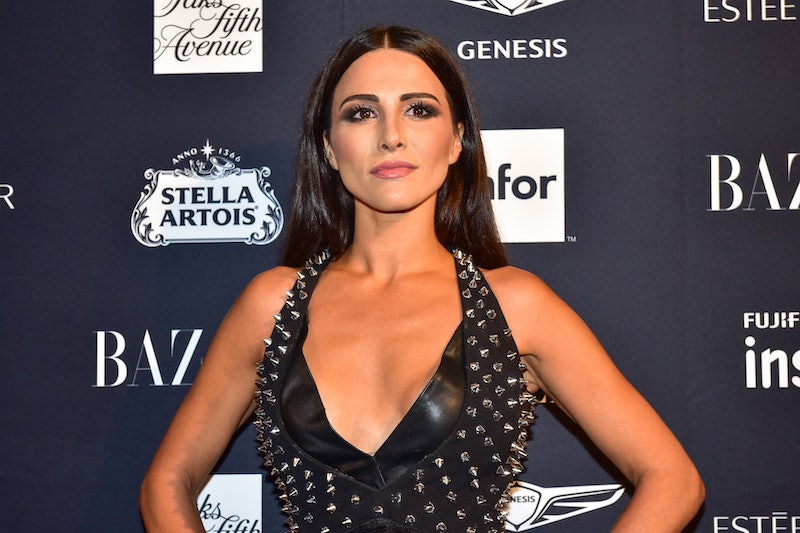 After sending Bachelor Nation into a frenzy by posting a steamy vacation photo with a "mystery man," Andi Dorfman denied dating Bachelorette contestant Bennett Jordan in the comments of her latest photo from her trip to Cabo, Mexico. On Wednesday, Dec. 16, the former Bachelorette posted a photo of her back on the beach, with a man's legs clearly visible in the shot. "No filters allowed in Cabo," Dorfman originally captioned the snap.

However, after her followers began speculating about the identity of her new beau, she deleted and then reposted a cropped version of the picture. "Now I look topless lol," Dorfman wrote alongside the new photo, which showed her staring out at the ocean, along with the hashtags "#outofoffice" and "#cropped" and some embarrassed emojis. The next day, Dorfman followed that up with a photo posed on her balcony, captioned, "Afternoon [tea] anyone? Or shall we stick to margaritas?"

Of course, Dorfman's best efforts didn't stop some mystery-loving fans from noticing that a man's legs were clearly visible in the reflection on her door and attempting to decipher his identity. "Did Kaitlyn [Bristowe] call you about Bennett?!" one follower commented, referring to the fan-favorite contestant from Tayshia Adams' season. Dorfman quickly refuted rumors that he was on vacation with her, responding simply, "Who?" (Jordan, for his part, hasn't commented on the romance speculation, and has instead been posting photos from his home in New York City on Instagram.)

Jordan isn't the only former Bachelorette contestant Dorfman is rumored to be dating following her steamy Instagram photo; TikTok user sheslee123 theorized that the mystery man might be Michael Garofalo, who appeared on Desiree Hartstock's season of The Bachelorette as well as Bachelor in Paradise. Though her TikTok pointed out that Dorfman and Garofalo posted photos from Sedona, Arizona, just days apart (and that Dorfman liked several of Michael's photos), a source told Us Weekly that he is not the man pictured. And so the mystery remains.

In 2014, Dorfman became the Bachelorette after her dramatic self-elimination from Juan Pablo Galavis' season of The Bachelor. On the show, she got engaged to final choice Josh Murray, but the pair ended their engagement just six months after the finale aired. She was recently linked to her runner-up — and former Bachelor — Nick Viall after they were spotted on a run together in Los Angeles in June. "Sorry for the buzz kill.. not dating," Viall clarified on Instagram. "Additionally, the only benefits that come from this friendship is conversation and running tips. Enjoy the day."

Jordan, meanwhile, became a fan favorite during his time on Adams' season, before being eliminated during a contentious two-on-one date, returning, and being sent home once more. “Sincerely, I had the absolute best time of my life doing it," the hedge fund manager said during an appearance on the Bachelor Happy Hour podcast. "I had such a good time. … I had a phenomenal time. I wouldn’t trade it for the world."

While he was "quite skeptical" that the Bachelorette process would actually work for him, Jordan revealed that he developed a genuine connection with Adams while filming the show. "It’s under this hyper-focused environment where you’re put into these situations that really drive those connections and relationships in such an unbelievable way that it works," he explained. As for whether he's also been able to make a genuine connection with Dorfman, fans will simply have to wait and see.