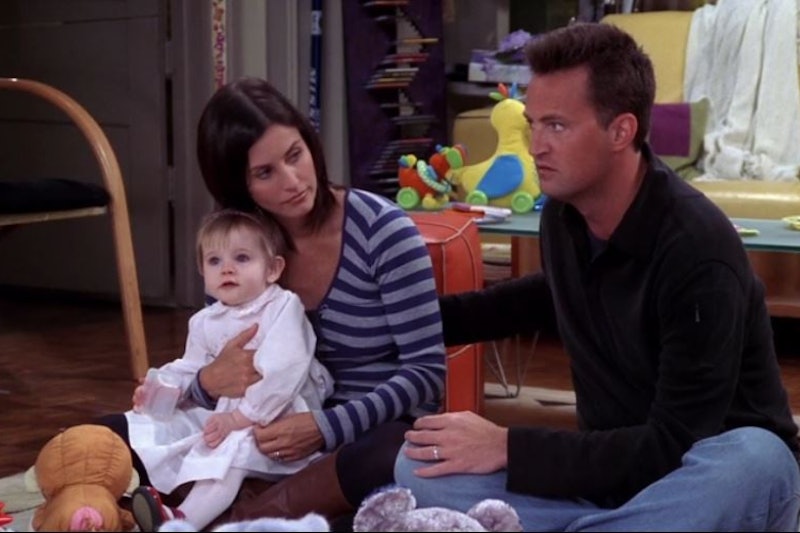 In the nearly 17 years since Friends ended its 10-season run, the beloved sitcom has been repeatedly rewatched and reanalyzed. Unfortunately, the passing of time hasn’t always been kind to the show; certain storylines and jokes are much more offensive by today’s standards. One joke about Emma’s birthday, however, aged poorly for a very different reason.

In Season 10, Episode 4, “The One With the Cake,” Ross and Rachel are determined to throw the perfect first birthday party for their daughter, Emma. Naturally, a lot goes wrong: The rest of the gang have places they need to be, Emma takes the world’s longest nap, and the bunny cake Rachel ordered arrives in the shape of a phallus. Amid it all, Ross tries to film a video to screen for Emma on her 18th birthday, which just so happens to fall in… 2020.

“Hi Emma,” Chandler says impatiently as he starts to record his segment. “It’s the year 2020. Are you still enjoying your nap?”

Funnily enough, that answer did come in 2020… sort of. On New Year’s Day that year, Noelle Sheldon — one half of the twins that portrayed Emma (along with her sister, Cali) — posted a photo on Instagram of her at Warner Bros. Studios’ Central Perk. “Just woke up for the best nap of all time, happy 2020!!” she wrote in part.

Fans loved her response at the time, which was understandable. There was nothing wrong with either it or the original joke. However, now, with everything that has changed in the world, it’s hard not to look back and think, Oh, guys. You have no idea what’s coming. But of course they didn’t. None of us did.

For essentially everyone, 2020 was a rough year. It was marred by shutdowns, illness, and worse. New Yorkers like the Gellar-Greens (assuming they stayed in the city) had an extremely hard go of it. Emma’s year would likely have been filled with virtual schooling, stress, and less time with her own friends. There would have been good moments to enjoy, too — like her birthday tape once it was digitized — but it would hardly have been what she or her parents imagined for her.

Emma’s actual 18th birthday, according to internet lore, would have fallen on April 4, 2020, not New Year’s Day. Netflix U.K. & Ireland’s Twitter account commemorated the occasion, and some of the replies felt her (fictional) pain. “Emma’s in quarantine, she’ll definitely be having a nap,” one person wrote. Another fan added, “If only we knew then how sh*t 2020 would be!!”

There may be no way of knowing exactly how Emma would have fared in 2020, but at least fans can rest assured that Noelle and Cali got through it. Both enrolled at UCLA, according to their Instagram bios, and they’ve continued acting. For Emma, we can hope she had a year much like her first birthday party: not what anyone planned but still special in its own way.

More like this
Ashton Kutcher Wants Danny Masterson “To Be Found Innocent” In Rape Retrial
By Jake Viswanath
At 28, Debra Jo Rupp Was Living A Much Different '70s Show
By Grace Wehniainen
The Banned 'Friends' Ad Shows Monica As You’ve Never Seen Her Before
By Sam Ramsden
Hilary Duff Is “Optimistic” About A 'Lizzie McGuire' Reboot
By Alyssa Lapid
Get Even More From Bustle — Sign Up For The Newsletter
From hair trends to relationship advice, our daily newsletter has everything you need to sound like a person who’s on TikTok, even if you aren’t.