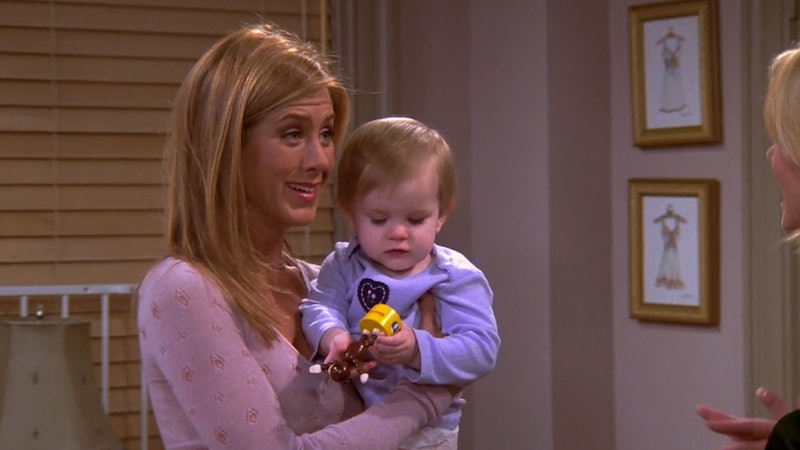 They were on a break (from acting), but the twins who played Rachel's baby on Friends are back in Jordan Peele's new movie. At 16 years old, Noelle and Cali Sheldon are sort of all grown up and taking on roles in Peele's upcoming thriller, Us, starring Lupita Nyong'o. So even for those who don't like horror movies, this Friends connection could have comedy lovers lining up to watch the scary movie a little closer when it hits theaters on March 22.

Since playing Rachel and Ross' daughter, Emma Geller-Green, in the tenth and final season of Friends, Noelle and Cali Sheldon have mostly lived like normal kids, according to People. Scroll through their Instagrams and you'll see them hanging out at the Ice Cream Museum and taking in a showing of Mean Girls on Broadway.

When not going to high school — they graduate in 2020. Feel old? — and hanging out with their friends, they have made a little time for acting. The two siblings appeared in the 2007 TV show Life and have since appeared in a slate of short films: Winner, Agorable, Maxwell, and Rougarou. Us marks their biggest return to acting, with the sisters tackling their biggest role since Friends. No surprise, the teens are excited for the movie.

"The trailer for Us is out now!" Noelle wrote on Instagram on Christmas Day when the first official sneak peek dropped. "So happy I got to be a part of this movie, it looks amazing and terrifying!"

As of now, it's unclear who Noelle and Cali play in Us, a horror film that focuses on a family on a beach vacation that goes horribly wrong when a family that looks just like them shows up. It seems like a movie about creepy doppelgängers could make good use of twin actors, no?

Last month, Peele told Fandango that Us is about as "undeniable truth, that is the simple fact that we are our own worst enemies.” If that gives you the full-on heebie-jeebies, maybe scrolling through the Us movie memes will take the edge off. Though, realizing that it's been 15 years since the Sheldons appeared on Friends might also do the trick.

Noelle and Cali were just babies when they got the plum role acting opposite Jennifer Aniston. Back in 2015, the sisters told Bustle that they were so young they don't remember much of their time on set, but they certainly won't forget what it meant to work with Aniston. "She's so famous, and I'm just a regular person, so it's really cool," Noelle said at the time.

Looking back, though, Cali said she had a particular favorite moment from the show. "When Noelle was in a baby swing and they were pushing her," she told Bustle, "they made some joke that she didn't understand but she still laughed. I thought that was really cute."

It's clear the sisters are proud to have Friends as their first credit on their IMdb. The two even stopped by the IRL Central Perk when it came to New York in 2017. "Flashbacks to ‘03," Cali wrote on Insta. Oh, how Rachel and Ross' daughter has grown.

It's why it might be time for the Sheldons to show the world that they're more than the "Rachel's baby from Friends." Once known as the twins who played Emma Geller-Green, Noelle and Cali Sheldon might soon be better known as the twins from Us. Has a nice ring to it now doesn't it?