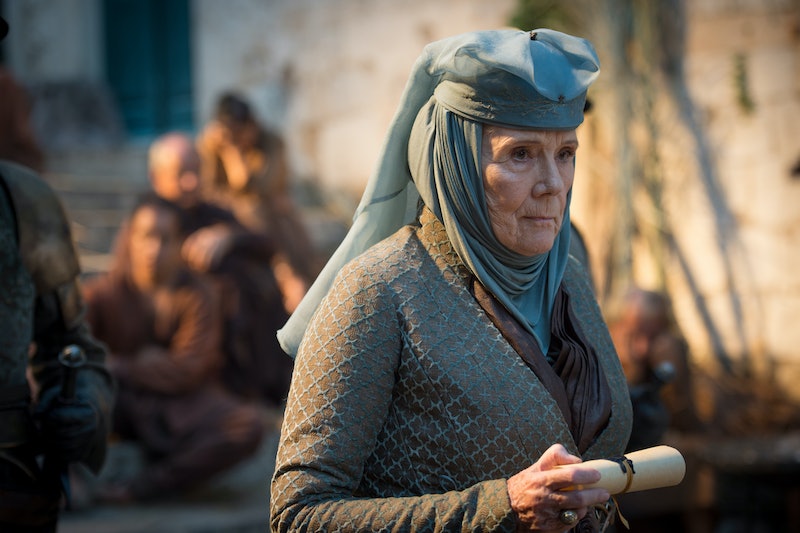 After an illustrious career on the stage and screen that included the 1960s Avengers TV series, On Her Majesty's Secret Service, and Game of Thrones, Dame Diana Rigg has died at the age of 82, BBC News reported on September 10. Born in 1938, Rigg made her professional stage debut in 1957 before becoming a member of the Royal Shakespeare Company shortly thereafter. However, she became a household name in 1965, after landing the role of the catsuit-wearing super spy Emma Peel on The Avengers, which she starred on for two seasons.

“That was my first battle with male authority," Rigg told Variety in 2019 of the show. "I discovered after a while in The Avengers that I was earning less than the cameraman. I made a bit of a song and dance about it and demanded more. I was ahead of the game, in that respect, because nobody backed me up. There was no sisterhood. In those days, you were on your own." In addition to earning two Emmy nominations for playing Emma Peel, Rigg built a career playing some of the most legendary and fierce female characters on stage and screen, including Tracy Di Vicenzo, the only Bond girl to ever marry 007.

In 2012, she earned an entirely new legion of fans as Olenna Tyrell, the fearsome matriarch of Highgarden, on Game of Thrones. Over the course of her four seasons of the show, Rigg became a fan-favorite — and earned three Emmy nominations — for her character's blend of sarcasm, wit and quiet menace, which culminated in the dramatic death of King Joffrey (Jack Gleeson) at the Purple Wedding. After learning of her passing, fans took to social media to celebrate Rigg's most badass moments on the HBO series.

"I loved the complexity of Olenna," she told Entertainment Weekly in a March 2019 interview. "She was a political woman, and she played the game brilliantly. Anything and everything executed ruthlessly for the survival of her family, which is historical in a way, like the Borgias and various other famous families."

Rigg was also delighted by the fact that her character had become such a fan-favorite, and introduced her to a brand new audience of fans. "Obviously, it’s great that has happened, and great it was a young audience — terrific," she explained. "That’s the nature of my profession. The young, I don’t expect them to know about my past, but if, through Game of Thrones, they discover me, that’s good." Later, she added that while she didn't necessarily "miss Olenna" as a character, she was "extremely grateful" for everything that Game of Thrones gave her.

"I enjoyed her hugely, and I’m very grateful for the new audience that she’s brought me," Rigg said of the legacy of the Tyrell matriarch. "I was extremely grateful that I didn’t die on the lavatory or in some rather undignified manner. It’s in the nature of this series, isn’t it, that people are dispensed with quite often?" Olenna, of course, had one of the most iconic Game of Thrones deaths in the series. She continued, "The fact that I’d been kept alive for far longer than the original author [George R.R. Martin] had intended seemed to me that I had a pretty good run for my money, and I was perfectly philosophical about being killed off."

Despite a nearly seven-decade career and undergoing emergency heart surgery in 2017 due to her lifelong smoking habit, Rigg told Variety in 2019 that she didn't intend to slow down any time soon. "I absolutely love [acting]! I really do. My relish is for the job and hopefully to do it as well as possible," Rigg said. "I had a lot of fun when I was young and had nowhere to go but up. And I’m having a lot of fun now, because the critics can say what they like. I just get on with life and enjoy it."