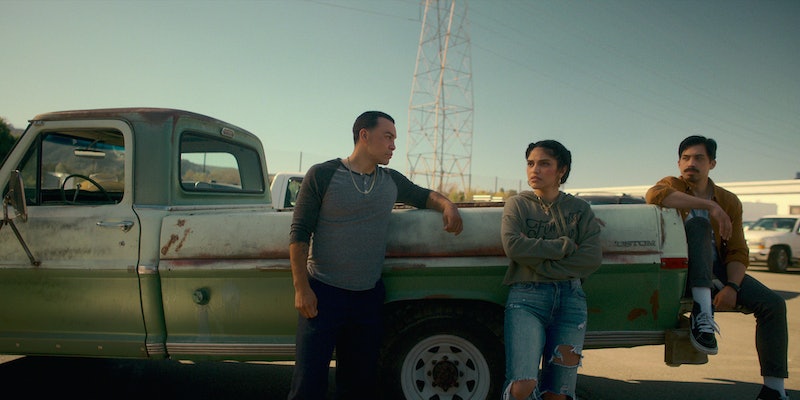 The end of Gentefied’s first season set the stage for an emotional second outing. After getting arrested for frustratedly urinating on a trendy new building in their increasingly gentrified LA neighborhood, Pop (Joaquín Cosío) was hauled away by ICE for an outstanding fine. At the time, the rest of the family was too busy to realize he may be in trouble: Erik (J.J. Soria) and his girlfriend Lidia (Annie Gonzalez) had just welcomed a baby and were considering a move to Palo Alto; Ana (Karrie Martin) had learned a wealthy patron bought the family’s struggling taco shop, Mama Fina’s; and Chris’ (Carlos Santos) absent dad had finally offered to pay for him to go to culinary school in Paris.

Season 2 picks up three months later, just as Pop is finally released from the ICE detention center he’s been held at. The family rallies together to keep him in the country while continuing to navigate their own personal lives and struggles, and things end in a relatively hopeful place. Chris decides to study Mexican cuisine in Mexico City, signifying that he finally sees the value in embracing his culture; Eric proposes to Lidia; Ana sells a big political piece to Nike; and Pop gets married and has his visa approved. This leaves the door open to a potentially much happier third season, even though the family ultimately loses Mama Fina’s. However, Netflix has yet to announce if Gentefied will return for Season 3.

The series was originally picked up by Netflix in February 2019 and premiered exactly a year later, in February 2020. It was renewed for a second season three months after that, in May 2020. So fans of Gentefied shouldn’t expect an announcement about Season 3 for at least several more weeks.

If the show is renewed, it could premiere sometime in 2022 or early 2023. Production for Season 2 reportedly began in February 2021 and was ready for a November debut. If the writers are able to get working on Season 3 in the next couple of months, Season 3 could feasibly arrive in fall 2022.

The Gentefied team hasn’t said anything about their long-term plans for the series, but America Ferrera, who serves as both an executive producer and director, seems eager to continue the story. “What I've always loved so much about this show is that it feels so true to my life,” she recently told Cinemablend. “It feels so true to the depths and the stakes that are present at the same time that the joy and the humor and the possibility for anything is always there.”

This article was originally published on November 9, 2021