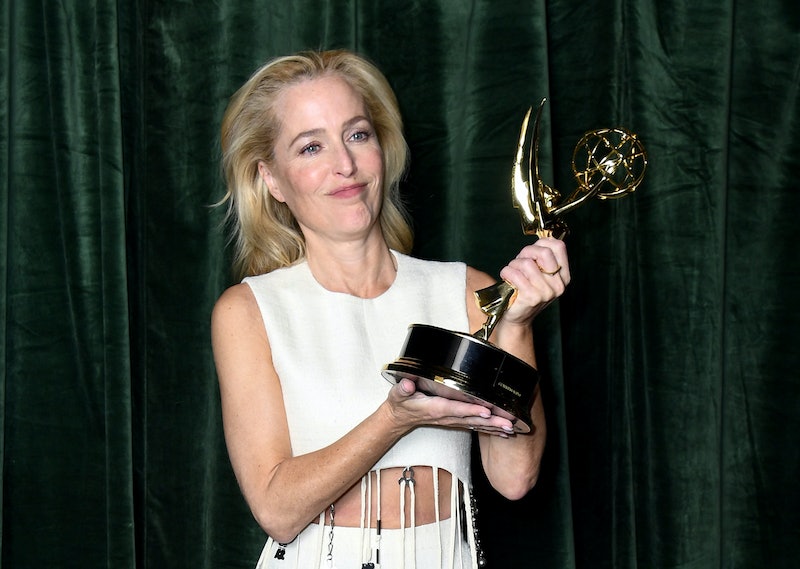 Gillian Anderson’s performance as British Prime Minister Margaret Thatcher on Netflix’s The Crown earned her the Emmy for Outstanding Supporting Actress in a Drama Series at the 2021 Primetime Emmy Awards on Sept. 19. After her big win, she fielded questions backstage in a press room, where one reporter strangely asked if Anderson has spoken to Thatcher about her role on the popular series. A visibly confused Anderson answered the question with grace and class. “Well, I have not spoken to Margaret,” she responded, without pointing out the reporter’s mistake.

Thatcher, who served as the UK’s Prime Minister from 1979 to 1990, died eight years ago in April 2013 after suffering a stroke. The Crown premiered November 2016, and Anderson wasn’t announced as part of the cast until 2019. She made her onscreen debut on the show’s fourth season in 2020, making it impossible for her to speak to Thatcher about her role on the show.

There is precedent for The Crown cast members “speaking” to the people they’re portraying. Helena Bonham Carter, who played Princess Margaret on Seasons 3 and 4 of the hit series, said she consulted a psychic medium to speak to the late royal, who apparently approved of her casting. “My main thing when you play someone who is real, you kind of want their blessing because you have a responsibility,” she told the Cheltenham Literature Festival in October 2019. “So I asked her, ‘Are you OK with me playing you?’ And she said, ‘You’re better than the other actress’ … that they were thinking of. They will not admit who it was. It was me and somebody else.”

You can watch the question and Anderson’s response at the 2:45 mark, below.

Anderson is set to return as Thatcher for the fifth season of The Crown, so there’s still time to “speak” with Thatcher via psychic, should she be inspired by the reporter’s question.

In her acceptance speech earlier on Emmys night, Anderson dedicated the award to her manager Connie Freiberg, who “believed in me when no one else would. And believed in my talent when I didn’t even think that I had talent. Who always advised me to take the high road. Who was one of the best friends that I've ever had in my life.”