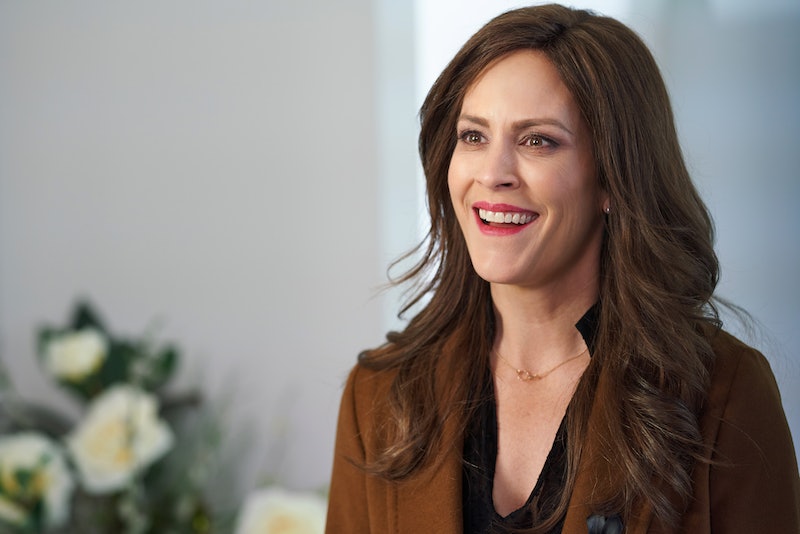 Lifetime loves a ripped-from-the-headlines story, and its new movie Gone Mom is based on one such tragic tale. In May 2019, Jennifer Dulos disappeared in Connecticut after dropping her five kids off at school. Per CBS News, the investigation soon turned to her estranged husband Fotis Dulos, with whom she was in a divorce and custody battle. According to CBS, documents showed that Jennifer was fearful of Fotis, and during divorce and custody proceedings reportedly said, “I am afraid that my husband will harm our children to punish me.”

After Jennifer disappeared, Fotis’ lawyer claimed that Jennifer hadn’t died. Instead, he alleged that she’d pulled a Gone Girl — aka staged her own death to pin the blame on her husband and then run away to live a new life. Jennifer’s family firmly denied the claim. “Evidence shows that Jennifer was the victim of a violent attack in her New Canaan home. This is not fiction or a movie. This is real life, as experienced every single day by Jennifer’s five young children, her family, and her friends,” her family said in a statement to CNN. “We are heartbroken. Jennifer is not here to protect her children, and these false and irresponsible allegations hurt the children now and into the future.”

Jennifer’s husband denied any involvement in her disappearance, but was ultimately charged with her kidnapping and murder. Shortly after being charged in early 2020, he died by suicide, the Stamford Advocate reported. Investigators believed him to be responsible for Jennifer’s death after they obtained video footage of him dumping trash in many different bins. Some of the garbage recovered included bloody clothes that matched Jennifer’s DNA, per CBS News. Though Jennifer’s body was never found, a medical examiner concluded that she was dead based on the large amounts of blood and other evidence, determining that she’d sustained “non-survivable injuries.”

There was more to the case after Fotis’ death. Per CBS News, investigators believe that Fotis had help from his girlfriend Michelle Troconis, who was allegedly spotted in video footage with him while he was throwing away Jennifer’s bloody belongings. The Hartford Courant reported that Troconis pleaded not guilty to conspiracy to commit murder and evidence tampering charges. She insists that she’s innocent and that she herself has been a victim of the media frenzy stemming from the case. According to the Courant, she’s currently awaiting trail and will likely go to court in 2022.

May 24, 2021 marked the two year anniversary of Jennifer’s disappearance, and her body has still not been found. Per CBS News, Jennifer’s five children now live with her mother in New York City.

More like this
Gerard Butler Insisted On Adding This Pivotal Scene To 'Plane'
By Catharina Cheung
Jemima Khan Used Her Own Life As Inspo For 'What’s Love Got To Do With It?'
By Darshita Goyal
Jennifer Coolidge Hunted For Jewels & Lashes In J.Lo’s Hotel Room
By Jake Viswanath
Pamela Anderson’s Dating & Marriage History Could Be Its Own TV Series
By Jake Viswanath
Get Even More From Bustle — Sign Up For The Newsletter
From hair trends to relationship advice, our daily newsletter has everything you need to sound like a person who’s on TikTok, even if you aren’t.