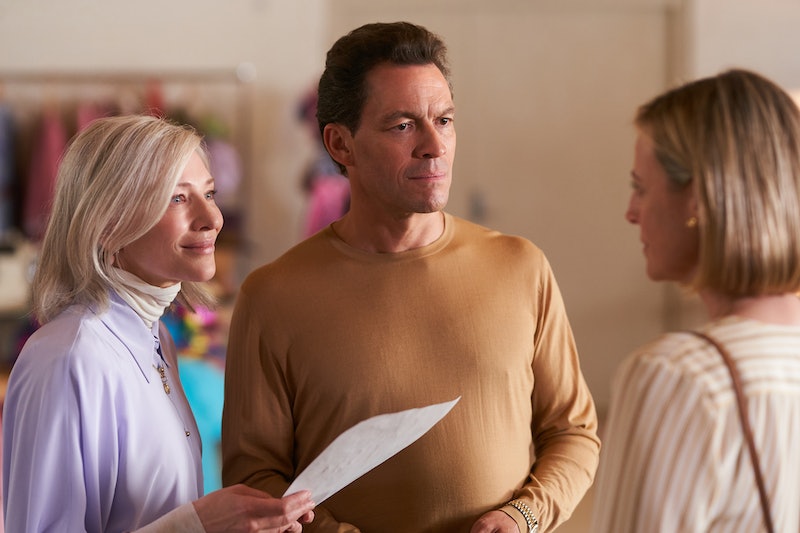 Content warning: this article contains a discussion of sexual assault. Early on in Netflix's new miniseries, Stateless, Sofie Werner (Yvonne Strahovski) sneaks out of a particularly stifling dinner at her parents' house and winds up at a dance. The seemingly innocuous event is hosted by a group called GOPA (Growing One's Potential Achievement) and fronted by the charismatic couple Pat (Cate Blanchett) and Gordon Masters (Dominic West). However, as the episode presses on, it becomes clear that GOPA is actually a cult. And though the name has been changed, it's based on a real organization.

Stateless loosely follows the true story of Cornelia Rau, a German-born woman and permanent resident of Australia who was unlawfully detained in an immigration detention center for 10 months between 2004 and 2005, according to ABC News. Per The Monthly, Rau became involved with a spiritual healing group called Kenja in 1998, prior to being detained. Kenja has firmly pushed back against being labeled as a "cult," writing on their website that "Kenja is, in fact, the opposite of a cult" and is not aligned with any religion.

According to The Monthly, Kenja was founded by Ken Dyers, a World War II veteran, and Jan Hamilton, a former actor, in 1982. They combined their names to form "Kenja" and only later discovered that it meant wisdom in Japanese. At the core of the organization is a practice called Energy Conversion, a two-way meditation in which participants sustain prolonged eye contact in order to channel inner blockages and "reach and unwrap the deepest recesses of the soul." When The Monthly published its report in 2005, these sessions were $130 each, and Kenja members were also expected to attend $50 workshops.

In Stateless, Sofie pays $400 a week for dance lessons as well as an Energy Conversion-like therapy with Gordon. Not long after Sofie joins GOPA, Gordon takes advantage of the vulnerable and emotionally intimate position these sessions put her in and sexually assaults Sofie, destroying the newfound confidence she'd developed.

This is also drawn from real life: according to the Sydney Morning Herald, Dyer was charged with 11 counts of sexual assault against four girls in 1993. He was acquitted of all charges, but in 2005 he was charged with another 22 counts for allegedly assaulting two 12-year-old girls. Dyers called the accusations a "witch hunt" and claimed he could not have assaulted the two girls because he suffered from erectile dysfunction, according to another Herald article. Then, in July 2007, another former Kenja member accused Dyers of repeatedly sexually abusing his daughter. Dyers died by suicide the following week, before he could stand trial for his existing 22 charges. As of July 2020, Kenja still appears to be operational.