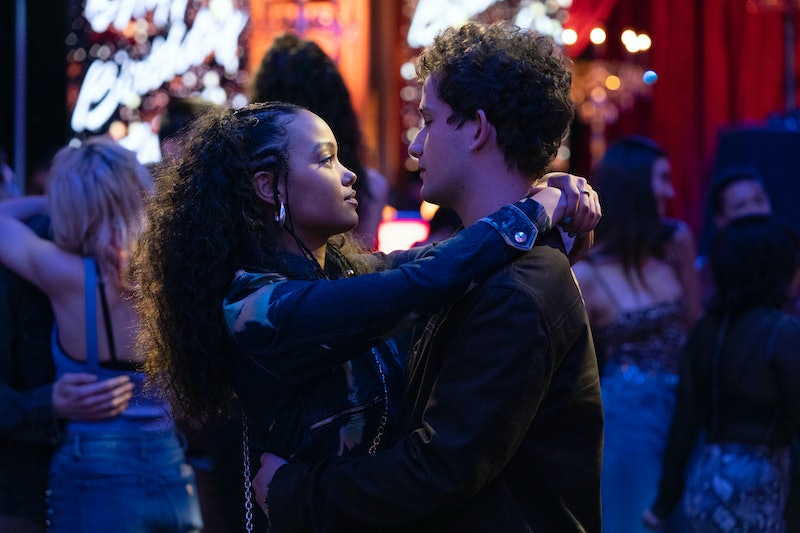 The original Gossip Girl series begins with one key conflict: Blair (Leighton Meester) finds out that her best friend Serena (Blake Lively) slept with her boyfriend. It’s the first of countless romantic betrayals and heartbreaks that fuel the series, driving both the plot and the show’s sex-focused PR strategy (see: those infamous posters, that semi-racy New York Magazine cover). Eventually, the characters’ relationships within the friend group get so incestuous that fans made detailed relationship maps in an attempt to keep straight who dated, got married, hooked up, or had flings.

HBO Max’s Gossip Girl reboot already seems similarly dedicated to mess. In the first two episodes alone, Zoya (Whitney Peak) snags Obie (Eli Brown) from her half-sister Julien (Jordan Alexander); Audrey (Emily Alyn Lind) cheats on her boyfriend Aki (Evan Mock) with Max (Thomas Doherty); and Aki returns the favor, cheating on Audrey… also with Max. You might find yourself asking the same questions you asked when it was Serena betraying Blair: Why? Outside of “because this is a TV show that loves drama,” why would anyone get intimately involved with their closest friends?

The first reason is fairly simple. “People in the same friend circles share similar interests, values, communication styles, and often a similar social status, which are key factors in establishing common ground and a foundation when first meeting someone,” relationship expert and dating strategist Kimberly Seltzer tells Bustle. “Friends bond on an intellectual, emotional, and physical level, creating comfort amongst one another.”

Fair enough. It’s not unlikely that a group of young, hot, rich, white kids attending the same private academy would find one another. But what distinguishes this group is how fearlessly they continue to make the same mistakes, knowing all the drama and resentment that romantic entanglements within friend groups often cause. For many of the messiest Gossip Girl characters, jealousy is not so much an accidental byproduct of hooking up with friends as it is a tactic that is consistently weaponized. Blair’s obsession with The Art of War extends to her intimate relationships, many of which she leverages to get ahead, to assert power and to wound those closest to her. If remaining Queen Bee requires sleeping with a best friend's boyfriend or having an affair with an ex’s best friend to assert one’s dominance, then so be it.

Outside of the brutality of romantic relationships on Gossip Girl, dating friends is actually a quite viable way to meet a partner, with two-thirds of romantic couples starting out as friends, according to a study in Social Psychological and Personality Science. Unlike the treacherous world of online dating and casual hookups, dating a friend offers a genuine sense of comfort in knowing you already get along with someone and share similar interests. And while it may be tricky, dating within a friend group can be done tactfully as long as everyone is dedicated to “being open, communicating to all parties involved… how each partner keeps boundaries within the group,” Seltzer says.

This is precisely where Gossip Girl characters fail. They insist on being secretive and malicious, throwing any and all boundaries out the window in favor of pure chaos. It even seems that the danger adds to the allure of the encounter. If it weren’t clear already, this brand of carelessness appeals to “people who attract and need drama,” Seltzer says.

It also turns out that there’s some actual research to support how a life of extreme wealth like that enjoyed by Gossip Girl’s main characters can impact dating tendencies. “There are a lot of studies that show that wealthy people engage in more sex but in a more disposable way rather than cultivating long-term relationships,” Seltzer says. Over the course of the original series, Chuck used and promptly disposed of countless women while struggling with his own demons. In a study about the psychological costs of material wealth, issues such as “substance use, anxiety, depression… and lack of intimacy in personal relationships” are all mentioned as common among children of affluence due to “pressures to achieve and isolation from parents.” Sounds like Chuck. Then there’s Blair, who used sex as a means of gaining power, and Serena, who hooked up with older men, teachers, and ex-boyfriends without a care. Their behavior aligns with the findings of a study published in the journal Evolution and Human Behavior that found that the desire for short-term relationships is linked to wealth.

Despite the constant feuds, the Gossip Girl friend group (both old and new) is tight-knit. With precious few people who can understand a life of obscene wealth and power, it makes sense that they keep everything — dating included — within the inner circle. In the cutthroat world of the Upper East Side elite, you never know if someone is using you, lying to you, or out to get you. Your childhood friends are really all you have. “If you are stuck on an island with a bunch of people who become your community, chances are you are going to explore the small options you have,” Seltzer says. And when that island is Gossip Girl’s Manhattan, those options are bound to lead to something juicy.