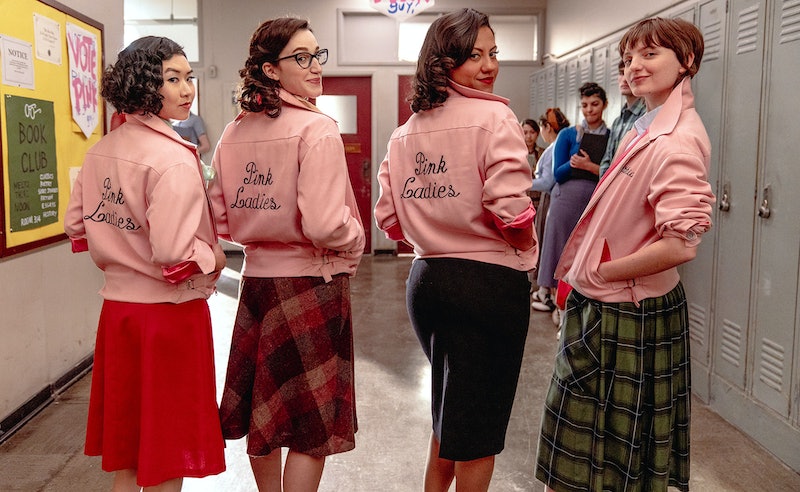 If you’ve ever wondered how the Pink Ladies came to be, Paramount+’s new series Grease: The Rise Of The Pink Ladies will answer that question. Set four years before the events of Grease, this musical rom-com tells the origins of the girl clique at Rydell High. As it turns out, Rizzo, Frenchy, Jan, and Marty took the moniker from another set of girls who walked the high school hallways in style. So here’s everything we know so far about Grease: Rise Of The Pink Ladies, including its cast and release date.

This story takes place in 1954 and follows four outcasts who form a group and “spark a moral panic that will change Rydell High forever,” according to the official synopsis. The story also includes the formation of the T-Birds, the other Grease gang that Danny Zuko led in the iconic film and musical. “Fans of the original should be happy,” creator Annabel Oakes told Entertainment Weekly. “We call Grease the mothership and we always are talking about how we have to pay homage and respect the mothership.”

Oakes was initially unsure about the prospect of expanding the Grease universe when she was first approached by Paramount+. “The original Grease is absolutely perfect,” she said. “But I was like, ‘What was up with the Pink Ladies? Were those girl gangs real?’ I started Googling and found out that there were real Pink Ladies at the high school of the original creator of Grease, Jim Jacobs.”

Rise Of The Pink Ladies will include 31 new songs written by Justin Tranter, which Oakes describes as “R&B with an amp,” adding that they wanted “to pay tribute to the real people who started rock & roll — Black musicians, Latinx musicians — who were at the forefront. We want those in the show.”

Marisa Davila (I Am Not Okay With This), Ari Notartomaso (Paranormal Activity: Next of Kin), Tricia Fukuhara (Loot) and newcomer Cheyenne Isabel Wells play the founding members of the Pink Ladies: Jane, Cynthia, Nancy, and Olivia. Jason Schmidt stars as Buddy, the leader of the T-Birds, alongside Johnathon Nieves as Richie and Maxwell Whittington-Cooper as Wally.

Only Murders In The Building’s Jackie Hoffman takes over from Eve Arden as Principal McGee, who is Assistant Principal of Rydell High at this point in Grease’s timeline. The show also stars The Equalizer’s Shanel Bailey, Ozark’s Madison Thompson, and The Flash’s Kallie Hu.

On Jan. 9, Paramount+ released a teaser for the series that gives a taste of the show’s vibe, including the soundtrack. Underscored by a remix of “Grease Is The Word,” Assistant Principal McGee can be heard telling the Pink Ladies that they “must be careful with who you associate” because “a girl’s reputation is all that she has.” In response, the group’s leader says, “maybe sometimes you’ve got to be bad to be good.”