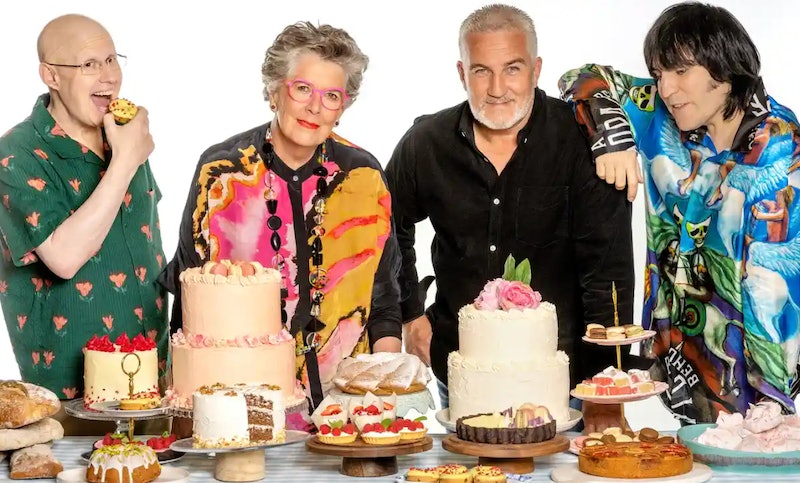 Whilst watching Channel 4’s Great British Bake Off, most focus on one thing: how desperately they want cake, and how cruelly devoid of cake their kitchens are. But for the proactive viewers out there, who preemptively raid the bakery aisle ahead of the show, another question might flit across their mind: what exactly goes on behind the scenes? And how does a Paul Hollywood handshake really feel? Well, wonder no more, baking fans: as these Bake Off backstage secrets will make you feel just like a contestant, even if you've reduced every cake you've ever tried to bake to ash.

The Bakers’ Meet A Psychologist Before The Show Begins

While Bake Off can be a life-changing opportunity, it’s important for contestants to know how to handle the public attention. Each baker meets a psychologist before being chosen for the show, to ensure they’re ready for the series’ global reach. Nadiya Hussain, the winner of Season 6, is a great example of the reality show’s power: she went on to release multiple cookbooks, hosts cooking masterclasses, and even has her own travelogue with BBC One.

The Contestants Have To Fund Their Own Practice Runs

Chetna Makan, 2014 semi-finalist, told Digital Spy, "We were warned in the beginning that this was going to be an expensive experience, that we were going to have to spend some money." She continued, "Because you don't really get any money to practise at home. If you want to make the cake five times at home to practise, that's your own problem, because they aren't going to pay for it."

The Bakers Wear The Same Outfit Two Days In A Row

It might seem like all three Bake Off challenges take place on the same day, but 2013 winner Frances Quinn told Cosmopolitan that the show's typically filmed over a weekend — but for the sake of continuity, the bakers must wear the same outfit twice. "Luckily, they change the aprons, so we don't look like a Jackson Pollock painting by the end of it," Quinn said.

The Beauty Shots Take Some Effort And Many Cameras

Ali Imdad from Season 4 told Birmingham Mail that often the bakers redo shots for the cameras —the beauty shots don’t just happen. “The baking is filmed as you do it by six cameras moving around the tent, though if they don’t catch something, like you whisking, you might have to do it again,” he said. Also each time a bake is ready to come out of the oven, a producer is immediately flagged so it can be captured.

Before Presenting Their Cakes, The Bakers Leave The Tent

In his column for RadioTimes, Giuseppe Dell’Anno, the winner from the 2021 series, revealed that all the contestants are asked to leave the tent before they present their bakes to the judges.

Once the baking is done, over 30 Bake Off elves step in to clean up the benches and make the spaces look presentable for the viewers and judges. “Occasionally, there are hours in between them. Obviously you don't see that because it's all a straight, streamlined, and seamless progression to when the judges taste the bakes, but you don't even notice it as a viewer. You just follow the story as they tell it,” he explained.

The Show Takes Over The Bakers' Lives

"You haven't really got a life other than Bake Off. No social life. That was the most stressful time," Quinn told Cosmopolitan. "We had to get a train down on the Friday and we'd have a wake up call at 5 a.m.; we'd be in the tent at 7 a.m. We'd wrap filming at about 8 p.m. and then it would be the same again the next day. I'd get back at about midnight on the Sunday." Sounds exhausting. In fact, Paul Hollywood said during a press conference that a 12-hour shoot was a “short day.”

The Weather Can Make Or Break A Bake

Faenia Moore told BBC Good Food that the temperature in the tent is the biggest challenge the bakers and production team face. "If we’re doing bread when we need warmth, chances are it’ll be freezing," she said. "Then when it’s chocolate, it’ll be scorching. It happens almost every year." She's not wrong, either. Remember Manon Lagrève's un-set chocolate scandal?

Ali Imdad, a Bake Off contestant in 2013, told the Birmingham Mail that the crew bake a Victoria sponge in every oven before each day of filming — that's at least 24 Victoria sponges in week one, then. "They do that to make sure that all the ovens are working properly and no-one can blame a bad bake on a technical malfunction," he explained.

Chetna Makan told Digital Spy that the bakers get to taste their creations first. "Before anyone else jumps on it, they always leave a piece of each bake and all the other bakers get to taste them," Makan explained, adding, "We all run to the food made by whoever got the most compliments. Literally, everybody runs, nearly knocking each other over to have a taste." What happens next? The crew descends, according to Ali Imdad. "The cameramen literally stand there with forks in their back pockets, waiting to swoop as soon as filming stops," he told the Birmingham Mail. And honestly, wouldn't you do the same?

One Person Leads The Cleaning For Everyone

At the end of the challenges, when the tent smells lovely but is full to the brim with used bowls, pans and spatulas, one person is responsible for cleaning them all. As per Birmingham Live, the show’s home economist Iva Vcelak leads a team of runners to get everything squeaky clean for the next day.

The Bakers Don’t See The Episodes Until The Season Airs

Frances Quinn, the winner of the 2013 series, explained that the bakers only get to watch the show when it is released for the public. “We'll be watching it when everyone else is, going ‘ahhh so that's what was happening over on their counter,’” she said to Cosmopolitan.

The Judges Don’t Always See If Their Challenges Are Possible

While each episode features a technical and signature challenge set by the judges, it’s not them who ensures if the task is possible. Occasionally, Prue Leith tries the challenges, but according to Birmingham Live, food researcher Becca Watson is responsible for checking if each test can be carried out within the time limit.

Each season, viewers come across never-heard-before ingredients after watching the contestants whip up magic with them on the show. The sale for these ingredients rises exponentially thereafter. For instance, after Season 5, there was a 180% spike in the sale of Peruvian goldenberries and a 300% rise in the demand for crystallised ginger. Reportedly, supermarkets struggle to keep up with the unusual offerings. In 2016, Morrisons hired a Bake Off officer to study the show for trends and stock the supermarket accordingly.

Freya Cox, 20, was the first contestant in Bake Off who used vegan recipes for the challenges. As per Insider, Cox hoped her appearance would inspire more people to go vegan and take the practice seriously. She also added that Hollywood and Leith were incredibly supportive of her vegan journey on the show. The only time Cox was forced to make non-vegan bakes was in the technical challenges, when the bakers could not pick their own ingredients. While she faced backlash on social media for this, Cox apologised and specified that receiving special ingredients would have been unfair to other contestants. Prior to this, the show hosted a Vegan Week in 2018 where bakers made plant-based bakes for three challenges.

There’s A Secret Kitchen On The Bake Off Set

Former Bake Off host Sandi Toksvig revealed she isn’t actually a big fan of cake. In an interview with Metro, she mentioned “the producer would often keep me going with cheese, I am like a mouse on set”. Toksvig added that the Bake Off set has another kitchen that isn’t shown in the series, where the food that the judges and contestants eat is prepared.