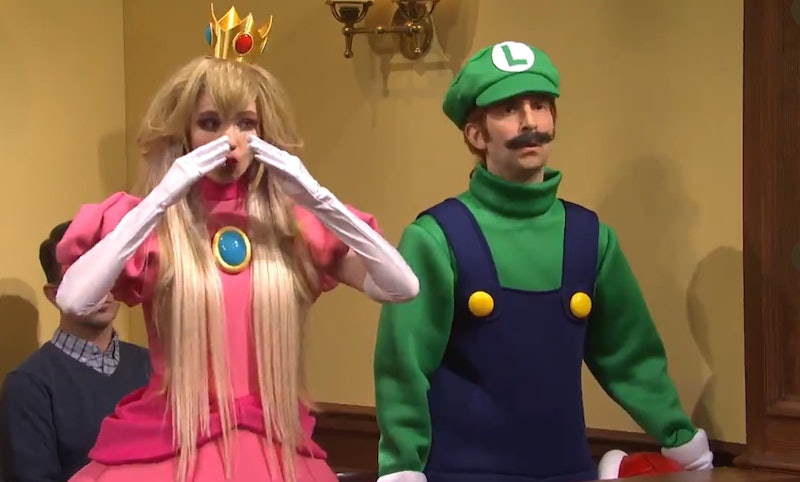 Ahead of Elon Musk’s May 8 SNL debut, his partner (and mother to son X Æ A-12) Grimes invited her Instagram followers to tune in and “watch me try acting!” And that, the musician did. During a sketch in which Musk’s Wario was on trial for killing Mario in the world of Mario Kart — hey, we knew this episode would be weird — Grimes appeared as Luigi’s paramour, Princess Peach, though she fiercely denies an affair: “I never a-touch him under the overalls,” she says. Ultimately, though, some pretty disturbing “u up?” texts reveal the scandalous truth to a jury of Toads.

After all the Mario madness, Grimes appeared alongside Musk and his mom, Maye Musk, during the episode’s goodnights — no longer in princess garb but a stylish gray outfit and pink mask.

For many Twitter users, Grimes’ scene-stealing performance as the beloved video game princess was a standout from the show.

One user also had fun comparing Musk and Grimes to another techy, noteworthy pop culture couple: Spongebob’s Karen and Plankton.

Last year, Grimes and Musk famously became parents to son X Æ A-12 — and earlier in the episode, Musk poked some fun at how to actually say the confusing name. “It’s pronounced, ‘cat running across keyboard,’” he explained in his monologue.

More like this
Michael B. Jordan Tackled His "Public Breakup" With Lori Harvey On 'SNL'
By Brad Witter
The Black Lotus Staff Has "Had Enough" In The 'White Lotus' Spoof From 'SNL'
By Brad Witter
Who Is Pete Davidson Dating? He & Chase Sui Wonders Got Caught Kissing
By Jake Viswanath
Yes, 'The Price Of Glee' Is Available To Watch In The UK
By Catharina Cheung
Get Even More From Bustle — Sign Up For The Newsletter
From hair trends to relationship advice, our daily newsletter has everything you need to sound like a person who’s on TikTok, even if you aren’t.