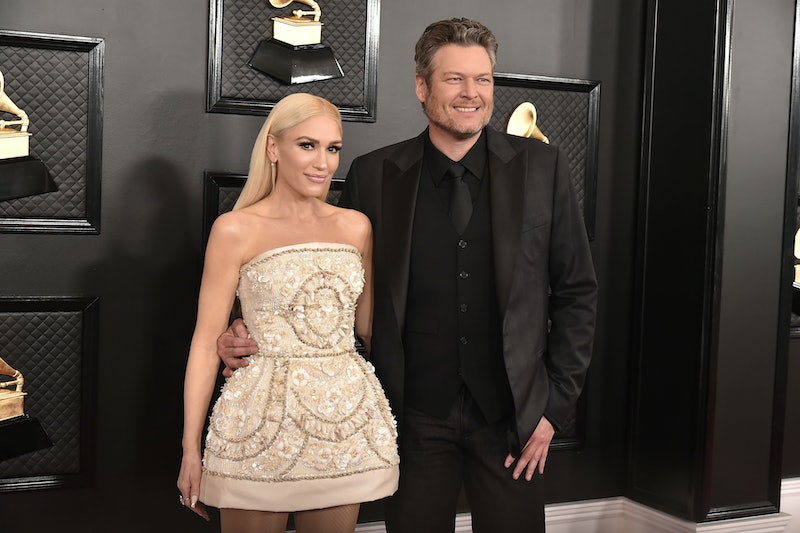 Don't speak: Gwen Stefani's new Instagram picture says a thousand words. The No Doubt alum and Blake Shelton are engaged after five years of dating. On Tuesday, Oct. 27, Stefani announced the news on Instagram by posting a photo of her and Shelton kissing in what looks to be a romantic chapel, with Stefani showing off an engagement ring on her finger. "@blakeshelton yes please!" she wrote.

Shelton shared the same snap on Instagram, writing that his engagement was his favorite moment of this tumultuous year. "Hey @gwenstefani thanks for saving my 2020," he wrote. "And the rest of my life.. I love you. I heard a YES!"

The artists famously met in April 2014, when Stefani became a coach on Season 7 of The Voice, which Shelton has been a judge on since the show's inception. The co-workers bonded in the summer of 2015 over their respective divorces; Shelton's from fellow country singer Miranda Lambert and Stefani's from Gavin Rossdale. Relationship speculation sparked that November, before the couple confirmed they were dating later that month.

In the five years since, the couple has been very public about their relationship. Shelton even got Stefani to dabble in country music with their first collaboration, "Go Ahead and Break My Heart," released in May 2016. The duo has since released two more songs together, "You Make It Feel Like Christmas" and "Nobody But You," which they performed at the 2020 Grammys back in January.

The couple has faced many engagement and marriage rumors, with singer Dua Lipa even accidentally referring to Shelton as Stefani's "husband" during their interview on Jimmy Kimmel Live in August 2020. "Well he's not my husband, but that sounded cool when you said it," Stefani responded, laughing. As she told Extra on Oct. 7, many people mistakenly think she and Shelton are married. "Do you know how many people say my 'husband' about him?" she said. "People got used to it or something like that. But it's pretty cute."

While both singers previously made it clear they're in no rush to get married, they continued to gush about each other publicly, with Shelton even saying that Stefani "saved my life" in a 2016 interview with Billboard. "I won't forget that day," he recalled about when they first connected on a deeper level. "I looked over at Gwen— who I didn't really know—and she had these huge tears in her eyes. She said, 'I'm going through something very similar to what you're going through. I understand. And I hate it.' ... Who else on earth could understand going through a high-profile divorce from another musician?"

More like this
Kanye West Apologizes To Kim K "For Any Stress I Have Caused" In Rare Interview
By Jake Viswanath
Adam Levine Denies Having An Affair — But Admits He “Crossed The Line”
By Jake Viswanath and Radhika Menon
How Ghosts Inspired Kesha's New Music
By Jake Viswanath
Everything To Know About Taylor Swift’s 10th Studio Album, 'Midnights'
By Grace Wehniainen and Jake Viswanath
Get Even More From Bustle — Sign Up For The Newsletter