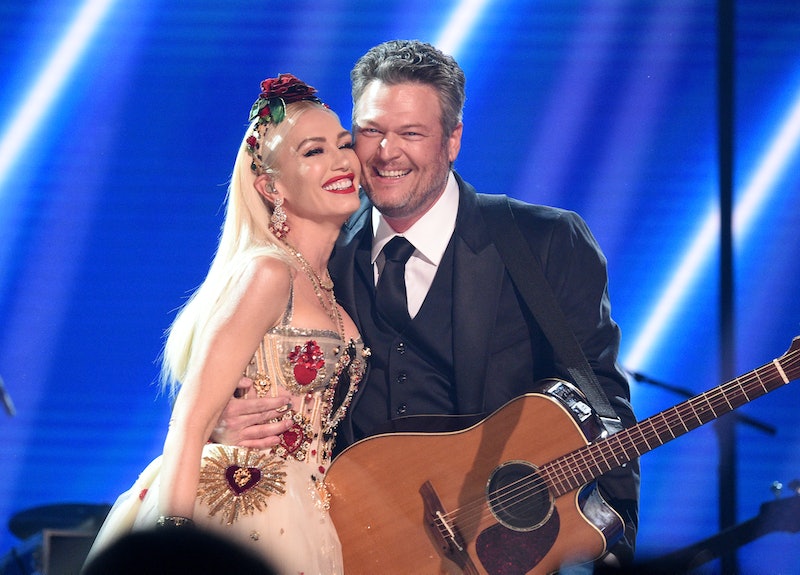 One of music’s most talked-about couples, Gwen Stefani and Blake Shelton, have tied the knot, getting married just before Fourth of July festivities in a private ceremony attended by only a small group of family and friends.

On July 5, Stefani announced the big news by sharing the first wedding photos on Instagram and confirming their wedding date. “July 3rd 2021 dreams do come true !!!” she captioned the post. “@blakeshelton i love you.” In the slideshow, the No Doubt singer showed off her gorgeous Vera Wang gown and their decadent wedding cake, crediting all of the people who helped turned their wedding into a reality. In a separate post, Stefani also revealed her spunky reception look. “You need a party dress when u get to marry @blakeshelton,” she wrote.

On July 3, photos of Shelton’s Oklahoma ranch, published by Page Six, showed it re-decorated as the ultimate wedding destination, complete with a tiny little chapel purposely built for the occasion adorned with white flowers surrounded by an outdoor seating area. While the newlyweds weren’t seen on camera, Stefani’s parents were seen being transported to and from the event, as well as several musicians.

The couple, who got engaged in October 2020, reportedly applied for their wedding license on June 29, according to TMZ, whose sources alleged that the couple were planning for a wedding over the July 4 weekend. The stars had an “entire weekend of activities and celebrations planned” to mark their big day.

The Voice host Carson Daly officiated the ceremony, as he revealed on TODAY, a fitting choice considering that Stefani and Shelton met as judges on the talent show. PEOPLE also reported that the couple threw a special dinner for their families and guests at Shelton’s Oklahoma restaruant, Ole Red, the night before the ceremony. “They looked really happy together and definitely in love,” a witness told the outlet.

After meeting while working on The Voice, following both of their divorces, they began dating soon after, making their first red carpet appearance as a couple in February 2016 at the Vanity Fair Oscar after-party.

Their relationship continued to blossom from there, and Shelton even credited Stefani for saving his life. In an interview with Billboard, the country star explained how the breakdown of their previous relationships helped them form a tight bond. “It went from that, to checking in on each other once a week through email […] to maybe three times a week, then every day,” he said. “Next thing I know, I wake up and she’s all I care about, and I’m wondering if she feels the same about me. ... Gwen saved my life. Who else on earth could understand going through a high-profile divorce from another musician? You can’t even imagine the similarities in our divorces.”

In May 2021, Shelton revealed that their first dance song: “It’s ‘If You Leave’ from the Pretty in Pink soundtrack.” Congrats to the newlyweds.

This article was originally published on July 5, 2021