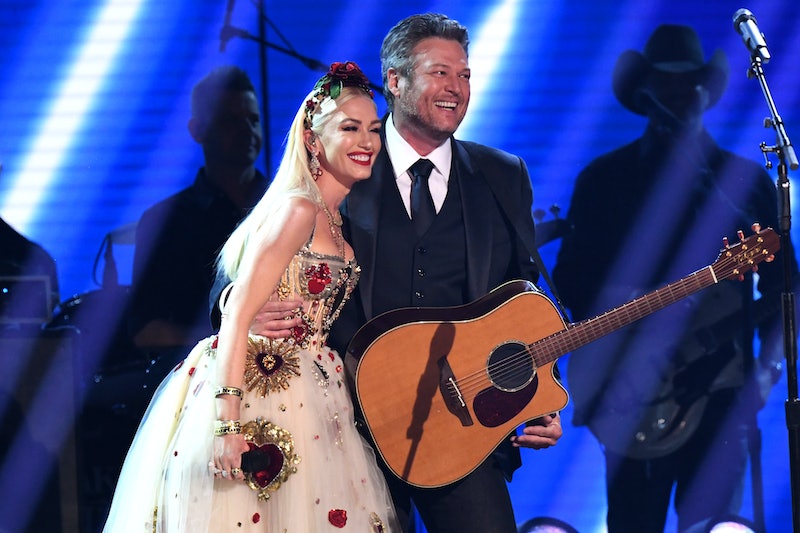 Gwen Stefani's recent engagement has her feeling "Hella Good," but if one thing had gone her way, it wouldn't have happened. Gwen Stefani said she nearly ruined Blake Shelton's proposal — and she didn't even know it. On Oct. 27, the singer announced on Instagram that she was engaged to Shelton after over five years of dating, and they were completely over the moon. "@blakeshelton yes please!" she captioned the photo of the couple kissing while she showed off her new engagement ring.

However, as she explained during a Dec. 15 appearance on The Kelly Clarkson Show, Stefani was close to canceling her family's visit to Shelton's Oklahoma ranch, which is where he planned to pop the question. "I had no idea, obviously," she recalled about the proposal. "In fact, I was trying to get out of going to Oklahoma because it was getting too complicated with COVID and the family. I was like, 'I think we should just cancel the trip.' Then we got it together, and we ended up going."

Stefani's three sons Kingston, Apollo, and Zuma, were all there to witness the surprise moment, along with her brother and Shelton's sister. "Meanwhile, Blake had had this ring for a couple of weeks, and nobody knew," she continued. Well, nobody except her father, who Shelton asked for his blessing before proposing. "He's so old-fashioned!" Clarkson responded. "He talked to your dad first."

Shelton popped the question in a somewhat deceiving way by asking Stefani to get him a fire starter to light the fireplace. When she opened the cabinet, she found her ring instead. "I was like, 'What? Are you serious?'" she remembered. "Everyone came running around because they heard us screaming or whatever, and crying." While the moment wasn't captured on video, Shelton's sister snapped some post-proposal pictures, which is what Stefani used to announce the news.

Though Stefani's idea to cancel the trip would've completely changed Shelton's plans, it turns out he was pretty flexible with how he proposed. During an interview with radio host Bobby Bones, the Voice coach explained that he had the ring for over two weeks before proposing and that his only plan was popping the question while Stefani's three sons were with them in Oklahoma. "I didn't want to take her away or do something private away from the kids," he explained. "I felt it was important for the kids to be a part of that moment, so that's what I did."