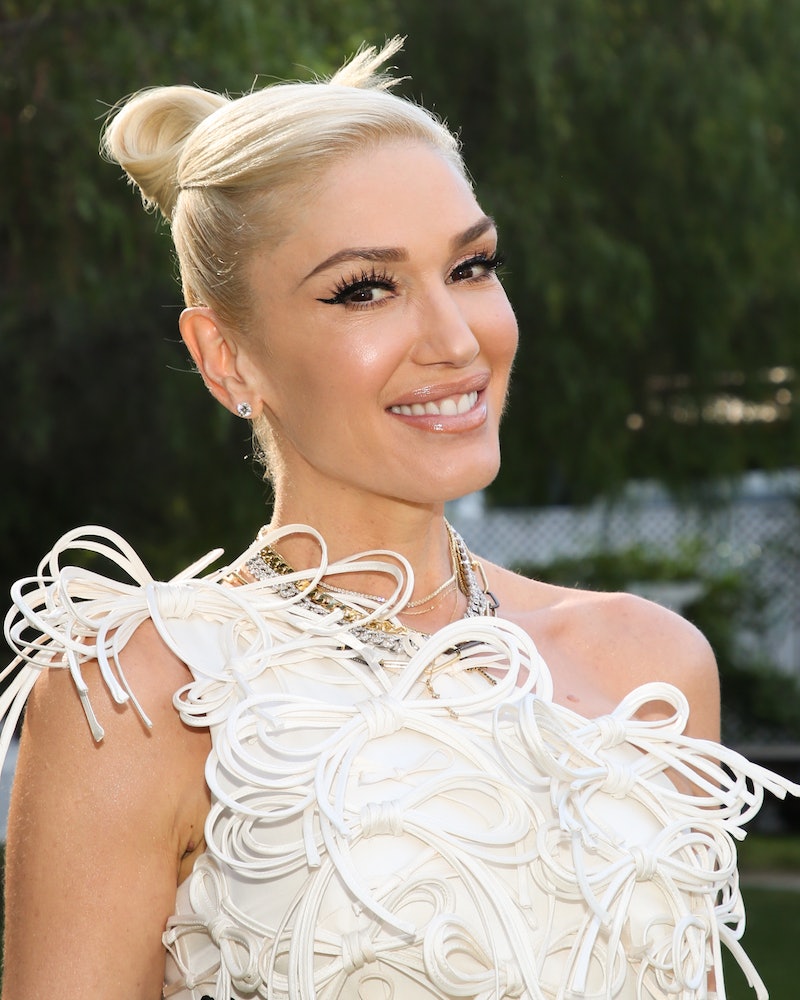 It's typical at the start of a new year to look back at the year that was, but Gwen Stefani is looking back a lot further than that. The new Gwen Stefani music video for "Let Me Reintroduce Myself" does just what the title of the song implies by taking viewers on a dizzying trip through many of the 51-year-old singer's iconic looks from across her three-decade career. The video, unveiled on New Year's Day, racked up over 100,000 views within its first two hours on YouTube and caused both "Gwen" and "#LetMeReintroduceMyself" to trend on Twitter in the early part of Jan. 1, 2020.

"#LetMeReintroduceMyself the official music video is out NOW!," Stefani wrote on Twitter, announcing the video's debut. "Literally can’t believe I got to revisit the original old me. This one is for all the old school and the new school… got a smile on my face go ahead and pass it on." The video itself contains plenty of references to the present — there are face masks, hand sanitizers, and zoom calls, 2020 is mentioned by name, and there's even a smiling nod to the pop star's October engagement to Blake Shelton. But it's the video's nods to the past that have fans freaking out.

As the video is about Stefani reintroducing herself as the same superstar you've always known, multiple versions of the singer pop up along the way to hit that point home, recreated by the singer donning a myriad of old outfits. There are looks from 2004's "Hollaback Girl" and Eve's 2001 hit "Let Me Blow Ya Mind" videos, some from '90s No Doubt videos like "Don't Speak" and "Just a Girl," and even one that recreates the singer's iconic blue-haired look from the 1998 MTV VMAs, plus several more. See how many you can spot in the video below.

Gwen Stefani's immutable appearance makes her recreated looks in "Let Me Reintroduce Myself" indistinguishable from the decades-old originals, and few other singers would be able to so convincingly relive their respective pasts (J.Lo is one who comes to mind). This allows for a surreal trip down memory lane, but at the same time, the video totally acknowledges this weird moment in time we're currently in with unbridled optimism about the future. So whether you're looking ahead this New Year's or prefer to wallow in some nostalgia for a while, watching Gwen Stefani's "Let Me Reintroduce Myself" is the perfect way to ring in 2021.

More like this
A New 'And Just Like That' Table Read Pic Confirms A Key Character's Return
By Jack Irvin and Grace Wehniainen
Netflix Reveals First Look At Wednesday In The 'Addams Family' Spinoff Series
By Bustle Editors
Everything You Need To Know About ‘Black Panther: Wakanda Forever’
By Bustle Editors
The Spice Girls Just Dropped A Brand New Music Video
By Sam Ramsden
Get Even More From Bustle — Sign Up For The Newsletter