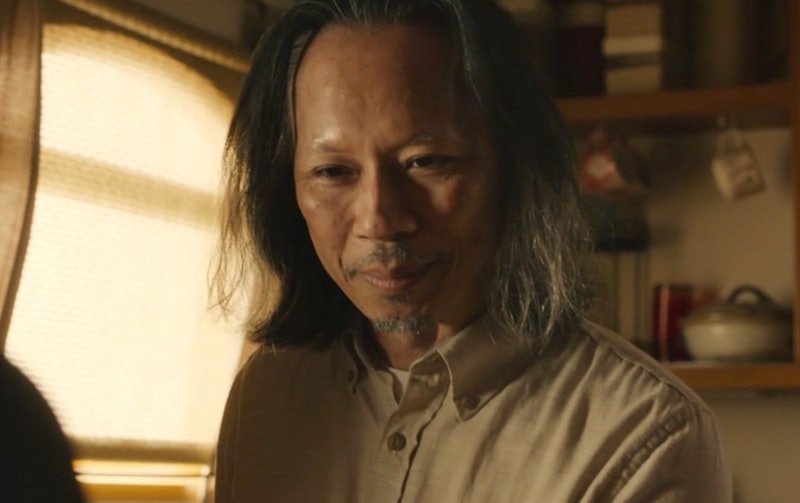 Spoilers ahead for This Is Us Season 5, Episode 4. Last week, This Is Us introduced a new character: Hai, a Vietnamese grandfather who seems to have a connection to Randall's birth mother Laurel. Fans saw an old photo of them together displayed in Hai's house. During the Nov. 17 episode, fans got a little more information about Hai. He sees Randall's city council news bulletin video and hears Randall mention his birth father, William Hill. Hai rewinds the video to listen again and seems taken aback by the William mention. Clearly, Hai knows of William and now he knows about Randall, too.

There are still a lot of questions that need to be answered about Hai and his connection to Laurel. But fans are already thinking up theories about Hai in the meantime. Here's a rundown.

He Could Be Connected To Jack or Nicky

Showrunner Dan Fogelman told Entertainment Weekly that it's "purposeful" that Hai is Vietnamese considering that Jack and his brother Nicky both served in the Vietnam war. "[This story is] existing inside of the same world and world events that were existing in that same time period when Jack was in Vietnam. So there is connective tissue," Fogelman said. That doesn't necessarily mean that Jack or Nicky knew Hai — who seems to be about their same age. But they may have crossed paths before Hai ended up in the United States.

He Dated Randall's Mom Before She Met William

Laurel's hair in the photo with Hai is different than it was when she was with William, so it's unclear whether it was taken before or after she dated William and had Randall.

Reddit user kayky97 thinks that the Vietnam connection could mean that perhaps Laurel met and dated Hai in Vietnam before she met William. Hai could have then moved to America to be closer to her, but perhaps she broke his heart when she met and started seeing William.

The showrunner did hint to TV Guide that we'd be learning about Laurel's life pre-William. "There's definitely answers as to, 'Is she still alive in the present day?' And definitely answers as to kind of what happened after this from before. Honestly, who was this woman well before this moment, well before she met William. Where is she from?" Fogelman said. Hai could be part of that past.

He Dated Randall's Mom After She Met William

It's also possible that after she survived her near-fatal overdose, Laurel was no longer interested in dating William, who had put Randall up for adoption. She may have found love again with Hai, and he could be crucial to helping fill in the blanks for Randall (and fans) about what happened to Laurel after and whether or not she's still alive.

Randall May Have Another Sibling

Reddit's bibi197 pointed out that in the photo of Hai and Laurel, their hands are both on her stomach. It's a popular pose for couples expecting a child, which could mean that Randall may have a half-sibling out there if this theory is true.

Hai Will Seek Randall Out

Now that Hai knows about Randall, his connection to William, and even how to contact Randall through the city council office, Hai may try to reach out to him. Even if Laurel is dead in the current timeline, Randall would still probably love to know anything he could about her, and Hai is one direct line to information. And Fogelman promised in his EW interview that the series is "not too far away from sharing a lot of information with the audience."

So expect Hai's knock on Randall's door or a meaningful phone call any episode now.