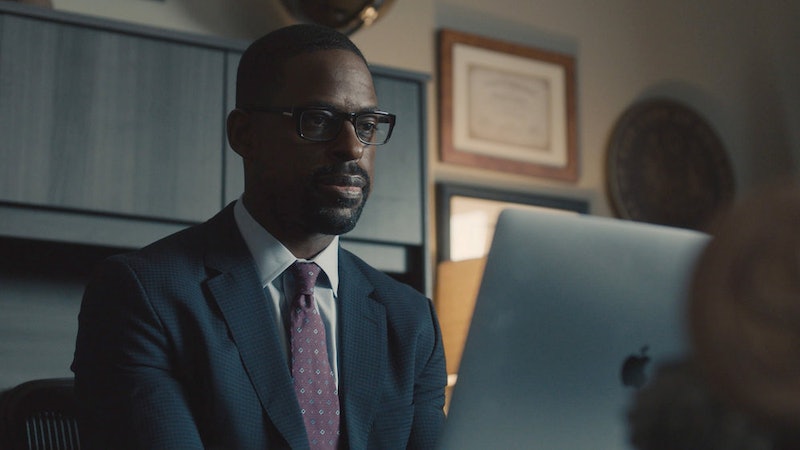 Spoilers ahead for This Is Us Season 5, Episode 3. This Is Us' Nov. 10 episode introduced fans to two new characters: a fisherman and his granddaughter. Initially, they didn't seem to have any connection to the Pearsons. But at the end of the episode, a photo of the man appeared to show him with Randall's birth mother Laurel.

Viewers learned in the Season 5 premiere that Laurel survived her overdose, but what she did afterwards is a mystery. We also don't know much about her life before she met Randall's birth father, William. Series creator Dan Fogelman told TV Guide that the show will answer all of these questions about Laurel in the coming episodes. "We're not going to kind of drag out a mystery like that one over multiple seasons, or anything. So there's a pretty quick answer, and I think it will be found to be elegantly done," he said."There's definitely answers as to, 'Is she still alive in the present day?' ... who is she, where is she from, what is her story? That's a big part of Randall's journey this season."

Now, fans are also going to have a lot of questions about this new fisherman character and what connection he might have to Laurel. In what seemed to be the present day, the fisherman and his granddaughter cooked the fish she caught earlier. "Cooking is the way to show someone you love them. I learned to cook because I wanted to impress someone very special to me," he explained. He didn't elaborate on who the "her" he was referring to is, but did confirm to his granddaughter that she's "the woman in all the pictures around here."

Because his granddaughter doesn't have a relationship with the woman, it seems like she's someone from his past rather than someone he's currently dating. In the photo, the fisherman is much younger and he's embracing the woman as they both smile. It's unclear if this is a photo of Laurel before she met William or after, but she clearly seems to have had a relationship with this man.

There's not much to go on right now aside from the photo and what the fisherman revealed to his granddaughter. But the answers are coming, and soon. Fogelman told Entertainment Weekly to expect a resolution by mid-season.