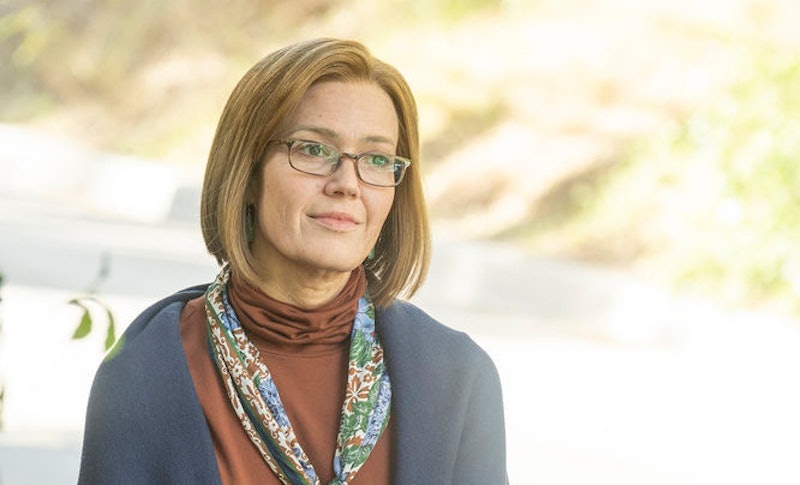 The This Is Us Season 4 finale dropped a lot of information on viewers. Kevin learned that he's going to be a father; Rebecca agreed to try the clinical trial in St. Louis to treat her early onset dementia, leading to a huge blowout between Kevin and Randall; and Toby and Kate talked about adopting a baby, with a flash-forward seemingly revealing they do in fact go through with the plan. That left a lot of material for fans to theorize about heading into This Is Us Season 5, especially considering the show will reportedly have only two more seasons to wrap everything up. Here are the best guesses about what's ahead.

Kevin & Randall Make Up Sooner Rather Than Later

In a 2032 flash-forward, the Pearsons gather at an ailing Rebecca's bedside, and Randall and Kevin still look pretty tense. This led fans to worry that the brothers still hadn't made up 12 years after their fight. But Sterling K. Brown, who plays Randall, hinted that's not the case. "Ready for some 'brotherly love?'" he tweeted in early October alongside a clip that shows Randall arriving at Kevin's door, perhaps to make amends. Kevin is about to become a father, and Randall will likely want to be in his nephew's life.

Now that we know Madison is pregnant with Kevin's twins, many fans have wondered if she's the mystery fiancée from the 40th birthday party flash-forward. The synopsis for Season 5, Episode 3 seems to confirm as much, reading, "Kevin and Madison navigate their engagement." But just because they're engaged doesn't necessarily mean that they'll make it down the aisle.

Kevin Ends Up With Someone Else

This Is Us showrunner Dan Fogelman told reporters in March that there are "many more chapters in Kevin's romantic story" to come, per The Wrap. Both Cassidy from his AA meetings and Sophie from his childhood were shown in the closing moments of the Season 4 finale, so perhaps Kevin ends up with one of them. "Cutting to these two women with whom he's shared intense relationship that moved him forward and backwards in great ways — there’s a reason for that and those characters we are not done with," Fogelman added.

Justin Hartley, who plays Kevin, has also suggested that Madison isn't endgame for Kevin. He told Entertainment Weekly that he hopes the next flash-forward shows who Kevin's with in 2032. "That would be the payoff, right? You want to know who it is — or if it was someone that had changed," he hinted.

We know from the flash-forwards that Rebecca's memory problems get worse, but some fans have theorized that's because of a car crash or something else unrelated to her current Alzheimer's diagnosis. However, a clip from the Season 5 trailer hints that the Alzheimer's trial doesn't go well, and that she's actually deteriorating even faster despite her upbeat attitude. "I just feel like magic," Rebecca tells Kate in the trailer while Kate looks back at her, upset and concerned. If Rebecca thinks the trial is working when it's not, it would make her memory lapses even harder for her kids to handle.

Because Toby's not wearing a wedding ring in the 2032 flash-forward, some fans think he and Kate get a divorce. And Season 5 could be laying the groundwork for that with a difficult journey to adoption. "There's going to be struggles around it," Chris Sullivan, who plays Toby, told Entertainment Weekly. "I'm sure there will be individual personal feelings between Toby and Kate. I'm sure her family will have thoughts. We’ll see how the writers handle it, but I can guarantee conflict!" He added that this season will delve into "the longterm health of Toby and Kate's relationship."

Worse than a divorce is the theory that Toby's not wearing a ring because Kate dies. This used to seem out of the question because Toby says in the 2032 flash-forward, "I just talked to Jack and they're on their way,' and the "they're" in question seemingly included Kate. However, with the introduction of young Jack's sister Hailey, the "they're" could now mean him and Hailey, leaving the possibility open that Kate is dead. That would be a real gut-punch to fans who are sort of expecting Rebecca's death but would be blindsided by Kate's.

In flash-forwards of Rebecca, Miguel is nowhere to be seen, which is extremely unlike him. This has prompted some viewers to theorize that he and Rebecca split up after her memory gets worse. And Season 5 seems to hint as much. On a recent call with reporters, Fogelman said that Rebecca and Miguel's relationship will be a big focus of the season, and that she and Miguel moving to St. Louis for her clinical trial will be a "challenging chapter for Rebecca moving forward," per Glamour.

Milo Ventimiglia, who plays Rebecca's ex-husband Jack, hinted to Us Weekly that Miguel may not be at Rebecca's bedside for an even sadder reason. "Speaking as Jack, it breaks my heart that Miguel is not around because that's his best friend," Ventimiglia said. "But maybe that means that Jack and Miguel are just kind of hanging out in heaven together. I don’t know!"

In a flash-forward at the end of Season 4, fans saw that Jack's brother Nicky is wearing a wedding ring. He's always seemed like kind of a loner, so it's surprising that he got married. But it's possible that he fell for and married Cassidy while the two worked through their PTSD together. Or maybe after Miguel was out of the picture, Nicky and Rebecca got married. She does have a habit of forming relationships with the people closest to her husband. Others think that Nicky may be pretending to be Jack (or Miguel) since neither of them is there for Rebecca and she may be too confused to understand why her husband wouldn't be at her side.

There are so many directions for This Is Us to go in, and the clues will only continue to add up as Season 5 progresses.