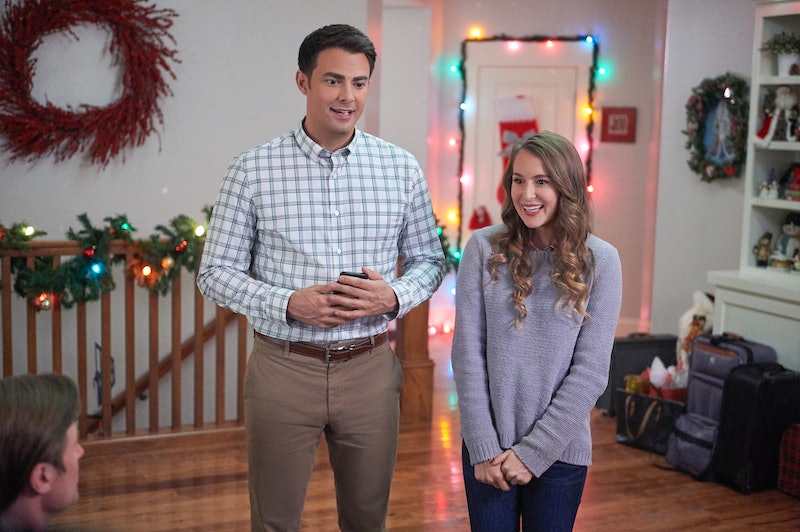 It's almost the most wonderful time of year, well, on the Hallmark Channel that is. On Wednesday, Sept. 23, Hallmark's 2020 Christmas movie lineup was announced. And, other than officially kicking off the holiday season in October, the network announced that one of their new films will include a gay romance. Better yet, Mean Girls actor Jonathan Bennett is going to help bring it to life in the Hallmark Christmas movie titled The Christmas House, airing on Nov. 22.

The original Hallmark movies also stars One Tree Hill alum Robert Buckley, Ana Ayora from CW's In the Dark, Everwood's Treat Williams, Sharon Lawrence from NYPD Blue, and Brad Harder, who is known for Hallmark's Aurora Teagarden Mysteries. The Christmas House will follow the Mitchell family, as Phyllis (Lawrence) and Bill (Williams) hope to bring their family together by recreating "the Christmas house." Buckley and Bennett play their sons, Mike and Brandon, respectively. In addition to a storyline following Mike and his high school sweetheart Andi (Ayora), the movie will also include the journey of Bennett's Brandon and his husband, Jake (Harder), as they wait to hear back from an agency about adopting their first child.

The main focus of the movie might not be Brandon and Jake's romance, but the fact that a Hallmark Christmas movie is featuring an LGBTQ+ storyline is definitely a step in the right direction. "Our holiday table is bigger and more welcoming than ever," Michelle Vicary, Hallmark Channel's EVP of programming said in a statement (via TVLine). "This year’s movies reflect our most diverse representation of talent, narratives, and families, including The Christmas House, featuring a storyline about a gay couple looking to adopt their first child, and starring Jonathan Bennett in an ensemble cast."

Back in November 2019, Hallmark addressed criticism for its lack of LGBTQ+ couples showcased in holiday movies. Hallmark's parent company, Crown Media, recognized the issue. "We are continuing to expand our diversity. We are looking at pitches for LGBTQ movies," the company said in a statement to The Wrap. "And we are looking to expand and represent the United States as a whole." The Hallmark Channel also came under fire last December for pulling several ads featuring a lesbian couple kissing at their wedding. Since then, the network vowed to do better by telling more LGBTQ+ stories.

To be clear, Hallmark has previously included LGBTQ characters in supporting roles. Just in August there was an LGBTQ wedding shown in Hallmark's movie Wedding Every Weekend, the first time a same-sex wedding was featured in movie for the network. The wedding of Vicky (Carmel Amit) and Amanda (Makayla Moore) was quick, but they were shown getting married and kissing.

Like Hallmark, Lifetime is also becoming more inclusive by airing its first LGBTQ+ holiday movie starring real-life married couple Ben Lewis (Arrow) and Blake Lee (Parks and Recreation). Unlike Hallmark, Lewis and Lee's romance as Hugo and Patrick, respectively, will be the main storyline in their film. Fran Drescher also plays Lewis' mom in the The Christmas Setup, which premieres Saturday, Dec. 12 on Lifetime.

As for Hallmark's festive season, it officially kicks off on Oct. 23 with the annual Countdown to Christmas. You can check out the full 2020 lineup here.

More like this
Adam Ali Hopes 'Waterloo Road' Will “Subvert” Queer Misconceptions
By Sam Ramsden
Adam Lambert Called Out The George Michael Biopic Over Potential Casting
By Sam Ramsden
Here’s What Happens To Bill & Frank In 'The Last Of Us' Video Game
By Brad Witter
At 28, Rosie Perez Risked Her Career To Stop Playing Stereotypes
By Gabrielle Bondi
Get Even More From Bustle — Sign Up For The Newsletter
From hair trends to relationship advice, our daily newsletter has everything you need to sound like a person who’s on TikTok, even if you aren’t.